Merkel, Macron: 'Russia is a big challenge for us'

German Chancellor Merkel and French President Macron said maintaining dialogue with Russia was crucial for "security in the European Union." They also said the EU also faces challenges dealing with Russia and China. 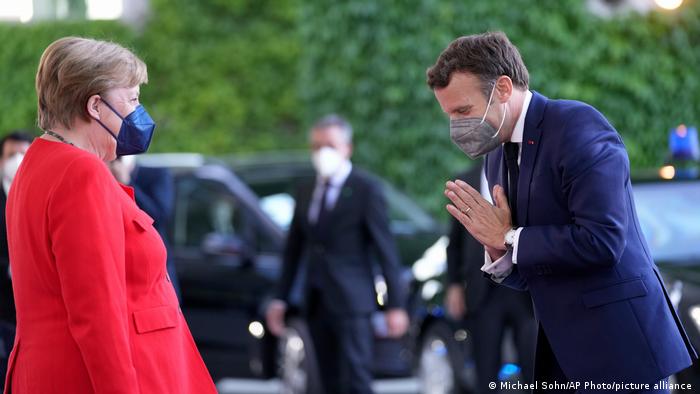 The French president is Merkel's first foreign visitor this year

German Chancellor Angela Merkel and French President Emmanuel Macron met on Friday evening to discuss a range of European issues, including ties to Russia and the bloc's fight against the spread of coronavirus variants, ahead of an EU summit next week.

At a press conference before the talks in Berlin, the two leaders told reporters the EU was facing "major challenges" in dealing with Russia and NATO ally Turkey.

They also warned the bloc's member states to be vigilant to prevent the cross-border spread of the coronavirus strain known as the "delta" variant.

Dealing with Russia and Turkey

Merkel stressed that the EU should keep communication with Russia open, despite disagreements over issues such as the conflicts in eastern Ukraine and Syria.

"Russia is a big challenge for us but Russia is also a continental neighbor of the European Union and we need to ensure that all hybrid attacks are stopped," the chancellor said.

"We have an interest to remain in dialogue with Russia if we want security and stability in the European Union, as difficult as this is."

CDU's Armin Laschet: A clear stance on Russia, but find ways to work together

Macron said that he agreed with Merkel's comments, adding that a shared line needed to be found in relation to Russia.

Earlier this week, US President Joe Biden sat down with Russian President Vladimir Putin for a high-stakes summit in Geneva.

"I think we can all be happy that the President of the United States of America has once again created a climate of cooperation in which everyone must of course play their part," Merkel said.

Reopening amid the pandemic

The two leaders also addressed the easing of coronavirus restrictions in a number of countries ahead of the summer holiday season in the northern hemisphere.

Macron said EU member states needed to better coordinate their border reopening policies — a topic that is expected to be on the agenda at next week's EU summit.

"Some countries have opened their borders earlier for tourist industry reasons, but we must be careful not to import new variants," he said, adding that the EU was closely watching the spread of the more infectious delta variant in the UK.

Merkel said that while Germany currently had relatively low numbers of new COVID cases, the delta variant could change that.

"We can't act as if the coronavirus is over," she said. "Caution is still necessary so that we have a summer of many freedoms, if not all freedoms."

German authorities warned on Friday that the delta variant could be the dominant strain of the coronavirus in Germany by autumn.

The meeting with Macron, in the form of a working dinner, marked the first time this year that Merkel has hosted a foreign leader in Germany.

Both leaders attended the Group of Seven summit in Cornwall, England, earlier this month, as well as a NATO summit in Brussels on Monday.