Annegret Kramp-Karrenbauer is on her first official visit to Ankara. Talks with her Turkish counterpart focused on NATO's withdrawal from Afghanistan and tensions in the Mediterranean. 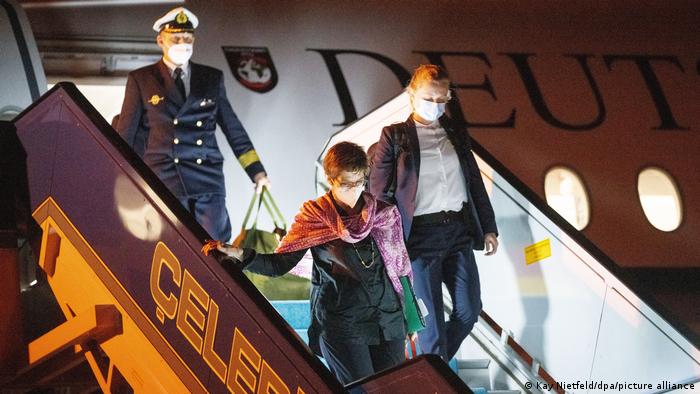 This is Annegret Kramp-Karrenbauer's first official visit to Turkey

Kramp-Karrenbauer called on Turkey to negotiate on its gas exploration plans in a disputed area of the Mediterranean Sea also claimed by European Union members Greece and Cyprus.

After her meeting with Akar, Kramp-Karrenbauer said that as a NATO partner, Turkey had committed itself to resolving conflicts "on the basis of international law, through negotiations."

"This also applies to contentious issues in the eastern Mediterranean," she said.

The defense minister praised that Berlin, Ankara, Athens, Nicosia and the EU had managed in recent months "to again find a better dialogue" on these issues. Germany would continue to support the negotiating process, she said.

The visit was Kramp-Karrenbauer's first to NATO partner Turkey.

How is Germany involved?

Germany has taken on the role of mediator in the dispute between Turkey and Greece over rights to natural resources in the eastern Mediterranean. The two sides have held diplomatic talks and Turkey has withdrawn its exploration ships from the contested waters, but Berlin believes the problem remains unresolved.

What did Turkey have to say?

Akar appealed to Germany to "understand" Turkey's actions against what it deems "terrorists," in particular the outlawed Kurdistan Workers' Party (PKK.)

Akar also asked for further financial support from Germany in caring for refugees in Turkey and Syria.

In addition, he urged Germany to "take steps in lifting restrictions on arms imports." German restrictions on certain goods posed a problem not only for Ankara but also for NATO, Akar claimed.

In response, Kramp-Karrenbauer said: "I am aware of Turkey's wishes."

"But on the other hand, Turkey is also aware that this is an issue that is subject to very strong restrictions in Germany," she said.

Turkey is currently securing the international airport in the Afghan capital, Kabul — an operation that is considered crucial in order for Western embassies to continue diplomatic operations there.

The pullout of NATO troops from the country could be complete as early as mid-July.

"We agreed that, as a first step, diplomatic missions must be maintained. This requires infrastructure at the airport as well as the presence of secure medical infrastructure," Kramp-Karrenbauer said.

"I am grateful that Turkey is willing to play an essential role here. But we also agreed that it cannot only be Turkey's job. It also requires support from within the alliance (NATO) and from partners," she added.

According to the state-run Anadolu news agency, Turkish President Recep Tayyip Erdogan said on Thursday that Ankara could take on "much more responsibility" in Afghanistan following the US withdrawal of troops.

NATO partners Germany and Turkey have had difficult relations in recent years for a variety of reasons.

Most recently, last year, tensions rose between the two countries after Germany's military, the Bundeswehr, conducted a search on a Turkish cargo ship. The raid was part of an EU operation to crack down on oil smuggling and stop illegal arms shipments from reaching conflict-ridden Libya.

Turkey said the move was illegal and accused Germany and the EU of unauthorized use of force. But the mission command said it had reason to believe the vessel could be violating the UN weapons embargo against Libya.