Germany warns Turkey against 'provocation' in Mediterranean over gas exploration

German Foreign Minister Heiko Maas has called on Turkey to end its exploration of gas reserves in contested regions off Greek islands. Maas said Germany stood in solidarity with Cyprus and Greece as partners. 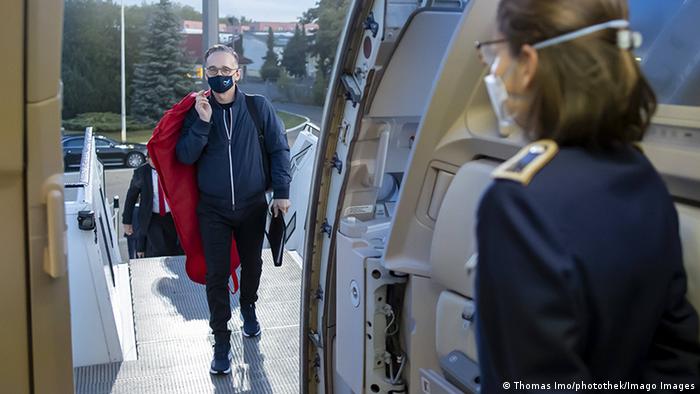 German Foreign Minister Heiko Maas on Tuesday warned Turkey that it should refrain from provocation in a gas exploration dispute in controversial sea areas in the eastern Mediterranean.

"Ankara must end the interplay between detente and provocation if the government is interested in talks, as it has repeatedly affirmed," Maas said in Berlin before embarking on a trip to Cyprus and Greece.

"We appeal to Turkey to refrain from closing the dialogue window that has just opened with Greece through unilateral measures," he added.

Germany's top envoy warned that the renewed Turkish gas explorations "would be a severe setback for efforts to de-escalate and thus for the further development of EU-Turkey relations."

He appealed to Ankara to remain open to talks and not resume seismic exploration of gas reserves in the contested waters, adding that Germany stood in "full solidarity" with Cyprus and Greece as EU partners in the stand-off with Turkey.

As Germany holds the rotating EU presidency, Maas has been mediating between Ankara and Athens. He said he had deliberately left Turkey out of his visit.

"My decision only to travel to Nicosia and Athens today is owing to the current developments that we have been talking about," Maas said, adding: "It is up to Turkey to create the conditions for talks."

Turkish naval authorities announced on Sunday that the vessel Oruc Reis would resume gas exploration south of the Greek island of Kastellorizo on Monday and stay there for 10 days.

Athens condemned the move and accused Ankara of "systematically undermining peace and security in the region."

"We call on Turkey to immediately reverse its decision," said the Foreign Ministry in Athens, adding it should "immediately cease its illegal actions."

Greece said the return of the Oruc Reis showed Turkey was unreliable and unwilling to negotiate.

Cyprus is also in disagreement with Turkey over its gas exploration.

Turkey and Greece, both NATO members, have long disputed over natural gas reserves and maritime boundaries. Both countries claim the right to drill the same areas in the same part of the eastern Mediterranean.

On Monday, Germany said it had "taken note" of Turkey's announcement on the energy prospecting.

"If there really were exploration in this disputed area of sea, that would be a very regrettable step and, from our point of view, an unwise one,'' German Chancellor Angela Merkel's spokesman, Steffen Seibert, told reporters in Berlin

The Turkish and German foreign ministers have clashed at a bad-tempered meeting in Istanbul. In one of several points of contention, Turkey accused Germany of siding with Greece in a dispute over energy reserves.