Afghanistan: Is Germany′s military shirking its responsibility for local staff? | Asia | An in-depth look at news from across the continent | DW | 09.06.2021

Afghanistan: Is Germany's military shirking its responsibility for local staff? 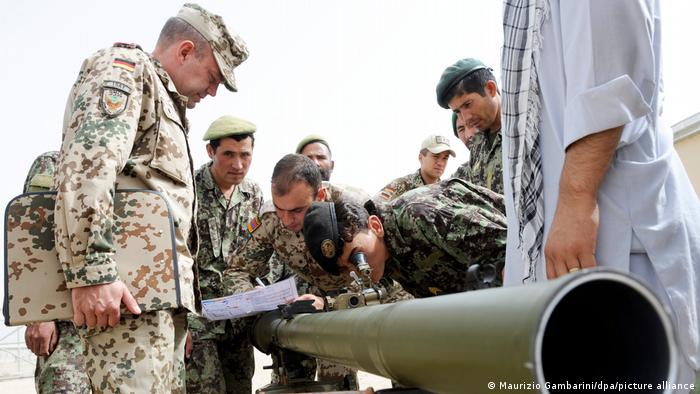 Many NATO member countries have boosted efforts to provide asylum to their local staff in Afghanistan before September.

Last month, the UK said it would accelerate the relocation of its Afghan staff ahead of a planned withdrawal of US-led NATO forces.

More than 1,300 Afghan workers and their families have already been brought to the UK under the relocation scheme for former and current Afghan staff. About 3,000 more could be relocated under the plan, according to UK Defense Secretary Ben Wallace.

But Afghans who have worked with the German military (Bundeswehr), are facing difficulties in their quest for relocation to Germany.

After the US invaded Afghanistan in 2001 and dismantled the Taliban regime, foreign forces relied heavily on domestic help. They needed translators, interpreters, cooks, cleaners, as well security experts who could help them understand the political and security dynamics of the country.

The Taliban view them as "traitors" who helped foreigners consolidate their "illegal" occupation.

After almost two decades of war, President Joe Biden has announced that all US forces will leave Afghanistan by September 11. Other NATO allies, including Germany, agreed to leave the country following the US move.

The unconditional departure of foreign troops from Afghanistan leaves NATO's regional workers in a difficult position.

DW found out that 26 former Bundeswehr employees — including five women — were last week sacked from their jobs, partly because they had asked for asylum in Germany.

Those who were fired from their jobs worked at the Bawar Media Center (BMC), which is funded by the German military in the northwestern Balkh province. Most of these people had been directly contracted by the Bundeswehr until 2016, although their contracts have been altered since then.

"If the Taliban catch me, they will not care about the changes to my contract. To them, I am a person who worked for Bundeswehr, and who continues to do so," one of the persons who got fired from his job told DW on condition of anonymity due to security reasons.

"Despite the changes in our contracts, we remained in close contact with Bundeswehr and had regular meetings with the German military about our work," he added.

"And that makes us a target for the Taliban and other [militant] groups."

A former BMC employee told DW that they accepted new contracts because they did not want to lose their jobs.

Some Afghan interpreters for the German military complain that they are not being granted asylum in Germany.

"I worked with the German forces from 2009 to 2018 in different capacities," Jawid Sultani, 31, told DW. He said that his visa application has been rejected eight times by German authorities.

"Since my dismissal in 2018, I have met dozens of former Bundeswehr employees, who have not been offered any kind of protection," he said.

Sultani said a group of former employees have set up a makeshift camp close to the Bundeswehr's base in Balkh to demand protection.

"The reasons for the rejection of my visa application were vague. No one knows who gets asylum and who doesn't," Sultani complained.

"We are scared. Everyone [in Afghanistan] knows about our role with the foreign troops. We can be easily targeted after September 11," he added.

The Taliban said on Monday that Afghans who assisted foreign forces in the country over the last 20 years would "not be in any danger" as long as they show "remorse." But the Taliban statement also offered veiled threats between words of reassurance.

The militants warned that local hires should "not desert" the country, and "must not engage in such activities in the future."

"If they are using the danger as an excuse to bolster their fake asylum case, then that is their own problem," the statement read in part.

Bundeswehr told DW in an email response that the change to contracts for the BMC employees was part of the handing over of responsibility to Afghans in the form of NATO's Resolute Support Mission.

"This transformation was completed, and BMC personnel were transferred to an independent employment," a spokesperson for Bundeswehr Joint Forces Command told DW.

But an official letter sent from the BMC to Afghan security forces state that BMC personnel were dismissed from their jobs "in consultation with and approval of advisors" as they have applied for asylum in Germany and had ignored the "rules and values" of the organization.

Since 2014, many Afghans who worked with the German forces have received asylum in Germany. These include some employees of the BMC. Most of them moved to Germany in 2014 when Pawasha Tokhi, a former BMC staffer, was stabbed to death in her home, reportedly due to her links with the German military.

Defense Minister Annegret Kramp-Karrenbauer said in April Germany would be willing to take in Afghan nationals who helped the Bundeswehr during the war.

A procedure for admitting Afghan staff who need refuge already exists in Germany — although there are a number of disputed cases. According to the Defense Ministry, 781 people have been approved for residency since 2013. It is, however, unclear how many local employees are still left in Afghanistan.

Kramp-Karrenbauer wants the existing process to be streamlined and accelerated. The Welt am Sonntag newspaper, citing the Interior Ministry, reported that Germany plans to set up an office in Kabul and probably also one in Mazar-e-Sharif in northern Afghanistan to help process cases.