Blinken is looking to drum up support for President Joe Biden's plan to withdraw all troops. He briefed both Afghan and US officials on the next steps, and warned the Taliban against carrying out any attacks. 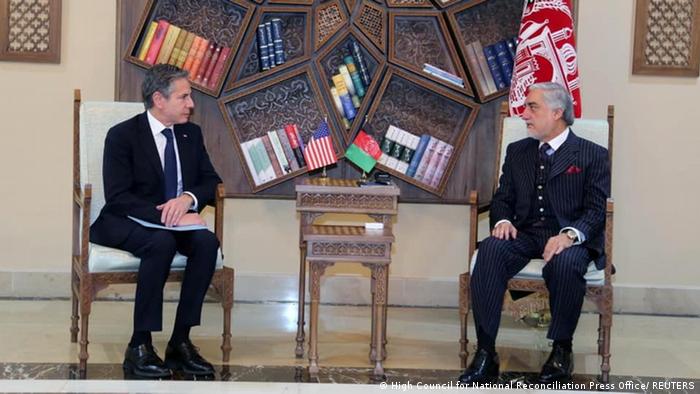 US Secretary of State Antony Blinken made an unannounced visit to Afghanistan on Thursday to show support and brief officials on US President Joe Biden's plans to withdraw all American troops from the war-torn country.

"The reason I'm here, so quickly after the president's speech last night, is to demonstrate literally, by our presence, that we have an enduring and ongoing commitment to Afghanistan," Blinken said at the US embassy in Kabul.

US announces US pullout from Afghanistan

US announces US pullout from Afghanistan

'The partnership is changing'

In Kabul, Blinken briefed Afghan officials on Biden's announcement to end longest ongoing war in US history, which began after the September 11, 2001 attacks. Blinken also met with Afghan President Ashraf Ghani and senior US officials

"We respect the decision and are adjusting our priorities,'' President Ghani told Blinken, expressing gratitude for the sacrifices of US troops.

Later, in a meeting with the head of the National Reconciliation Council, Abdullah Abdullah, Blinken said, "We have a new chapter, but it is a new chapter that we're writing together."

"We are grateful to your people, your country, your administration,'' Abdullah said.

Immediately following Biden's announcement on Wednesday, NATO said it would withdraw its 7,000 non-American forces in the country within the next few months.

The Taliban called on Thursday for the immediate withdrawal of US troops from Afghanistan, denouncing Washington's announcement.

A Taliban spokesperson earlier said that the US was breaching an agreement that to pull out troops on May 1, which former US President Donald Trump's administration had set.

In a statement, the Taliban threatened that militants would take "every necessary countermeasure" in response to the delay.

Blinken warned the militant group against carrying out any attacks on troops as they withdraw.

"If as our forces are withdrawing the Taliban were to attack them, it would be met with a very forceful response," he said.

The New York Times reported Thursday that the US is possibly seeking to reposition its troops to neighboring Tajikistan, Kazakhstan and Uzbekistan.

The Pentagon could also use attack planes and long-range bombers located on aircraft carriers and military bases in the Middle East and Central Asia to conduct strikes on insurgents in Afghanistan, the paper reported.

A United Nations report published Wednesday showed nearly 1,800 civilians have been injured or killed in Afghanistan during the first three months of 2021. The UN said 43.5% of the civilian casualties were caused by Taliban militants.

Despite billions of dollars in aid, 20 years after the US invasion of Afghanistan, more than half of the country's 36 million people live on less than $1.90 (€1.60) a day, according to World Bank figures.