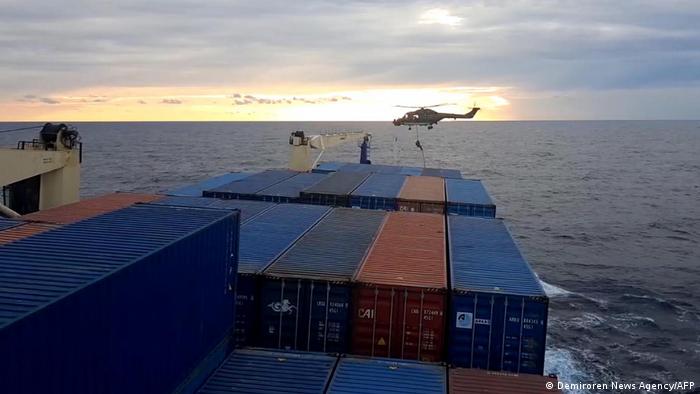 Turkish prosecutors on Friday launched an investigation into the search of the Libya-bound freighter Rosaline A by the German military which Ankara claims was illegal.

The chief prosecutor's office in the Turkish capital described the boarding, which took place on Sunday in international waters, as a breach of international law.

Marines from the German frigate Hamburg, part of the European Union's Operation Irini to enforce a UN embargo to stop weapons reaching conflict-torn Libya, boarded the freighter after orders from the mission's headquarters in Rome,

But the commando search was aborted after Turkey protested, asserting that the freighter was only carrying humanitarian aid.

Ankara and Brussels have subsequently argued over how prior authorization was sought.

However, a secret EU report cited by the German news agency DPA on Friday, indicated the Roseline A had long been watched on suspicion of making illegal arms shipments.

EU-Irini military analysts — in the report for United Nations experts — had previously spotted military aircraft being unloaded in the Libyan port of Misrata in satellite images, the German news magazine Der Spiegel reported.

Suspicious cargo was again sighted in November while the ship was docked in the Turkish port of Ambarli — located in the Sea of Marmara near Istanbul — said the confidential EU report's authors.

The prematurely aborted German search did not turn up suspicious cargo.

German Defense Minister Annegret Kramp-Karrenbauer said the marines had behaved "completely correctly" in the framework of the European Irini mandate.

However, her Turkish counterpart Hulusi Akar said that the Irini mission, which began in March, had been "ﬂawed from the onset."

In June, NATO began a probe after France said one of its frigates in the Mediterranean was targeted three times by Turkish radar while trying to approach a suspected Turkish civilian ship. Both France and Turkey are NATO members.

EU sources, cited by DPA on Friday, said the bloc was preparing new sanctions to help foil violations of the arms embargo on Libya.

The North African country, in turmoil since ruler Moammar Gadhafi was toppled in 2011, has become a proxy battleground for rival forces and foreign powers.

The UN says both sides in the Libyan civil conflict have reached a permanent cease-fire agreement. The world body called the deal a "historic achievement."

The leaders of France, Italy and Germany urged "all foreign actors" to stop interfering in Libya and to respect the UN arms embargo on the country. The trio hinted at sanctions as a way to enforce their position.