The European Union has imposed sanctions on three firms for breaking a UN arms embargo on Libya. Two individuals were also sanctioned for involvement with supplying military equipment material to the country. 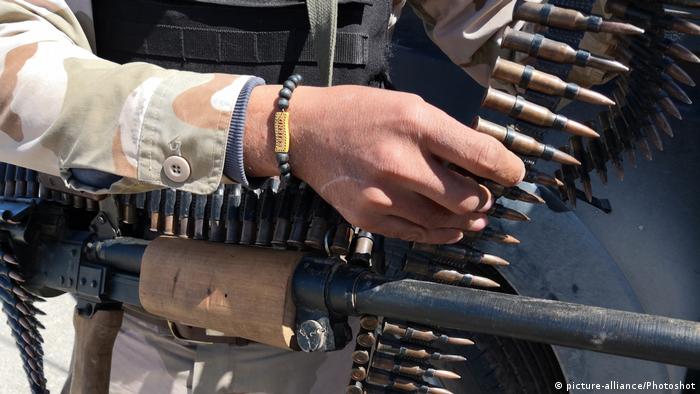 EU foreign ministers on Monday agreed to sanctions against entities that violated the UN embargo on arms flowing into Libya.

The measures target three companies — from Jordan, Kazakhstan, and Turkey — as well as two individuals for providing planes, ships and other logistics to funnel combat equipment into Libya.

The 2011 toppling of dictator Moammar Gadhafi plunged Libya into chaos, making it a battleground for rival forces. The UN weapons embargo was imposed that year, although this has often been broken.

Libya has two competing administrations: The Government of National Accord (GNA) in Tripoli, which is recognized by the United Nations, and a government in the eastern city of Tobruk. The Tobruk-based administration receives support from Egypt, Russia and the United Arab Emirates and is aligned with the leader of the so-called Libyan National Army, Khalifa Haftar.

Almost all countries involved in the conflict promised to stop supplying the warring factions with fighters and weapons at a summit in Berlin in January.  However, neither side fully kept to this.

The EU is particularly keen to see the dispute resolved, because the fighting in Libya has made conditions easier for people smugglers take migrants to Europe to operate in the Mediterranean Sea.

An earlier version of this article said a siege of Tripoli was ongoing since April 2019. That siege broke in June.

Mass graves were reportedly discovered in the Libyan town of Tarhuna. Government troops recently seized control of the area after the withdrawal of forces loyal to rebel warlord Khalifa Haftar.

An interim government in eastern Libya has resigned hours after protesters set fire to its headquarters in Benghazi. Protests also erupted in the cities of Al-Marj, Sabha and Al-Bayda.

Egyptian President el-Sissi has warned of a military intervention to protect Egypt's border with Libya. The move could bring Egypt and Turkey, who support rival sides in Libya's proxy war, into direct confrontation.

Both the UN-backed GNA government in Tripoli and the east-based parliament supported by military strongman Khalifa Haftar have announced a cease-fire in the restive region. The GNA has also called for elections in March.

Khalifa Haftar troops stopped production, looking for a share of the profits. They seem to have got their way, but political uncertainty is growing in GNA-controlled Tripoli and Haftar-stronghold Benghazi alike.