An interim government in eastern Libya has resigned hours after protesters set fire to its headquarters in Benghazi. Protests also erupted in the cities of Al-Marj, Sabha and Al-Bayda. 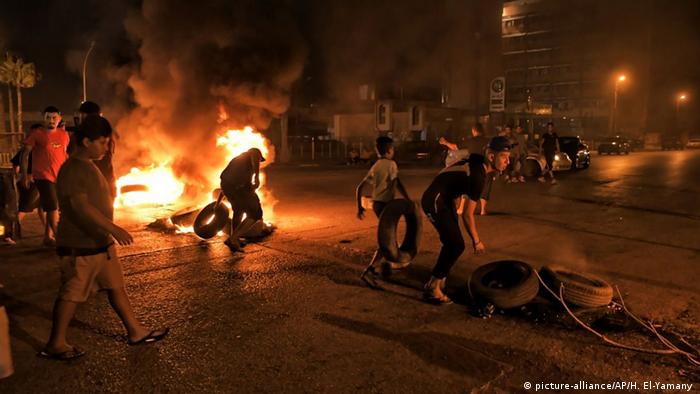 After days of protests against corruption and poor living conditions, the government in eastern Libya announced its resignation on Sunday.

Prime Minister Abdallah al-Thani submitted the resignation to the speaker of the eastern-based House of Representatives, in a country that has seen rival governments in the east and west since long-time dictator Moammar Gadhafi was overthrown in 2011.

Protesters set fire to the government's headquarters in the eastern city of Benghazi, as well as Al-Marj, which is a stronghold of Khalifa Haftar and his self-styled Libyan National Army (LNA).

Protests also broke out in the southern city of Sabha and Al-Bayda, which is the former seat of government.

Libya has seen extreme political, economic and humanitarian turmoil in the years since Gadhafi's ouster. The latest string of demonstrations, which began on Thursday, has been fueled by regular power cuts, cash shortages and high fuel prices.

The eastern government has been weakened considerably following a 14-month offensive by the LNA, during which it attempted to take control of the capital, Tripoli. The internationally recognized Government of National Accord (GNA) currently holds the city.

Since January, the country's economic crisis has worsened after Haftar's LNA imposed a blockade on Libya's oil facilities. Negotiations are on to end the blockade.

The Turkish government said it would consider forces loyal to general Khalifa Haftar "legitimate targets" if they didn't stop attacks on diplomatic missions. The UN has warned that Haftar's may have committed war crimes.