The Turkish government said it would consider forces loyal to general Khalifa Haftar "legitimate targets" if they didn't stop attacks on diplomatic missions. The UN has warned that Haftar's may have committed war crimes. 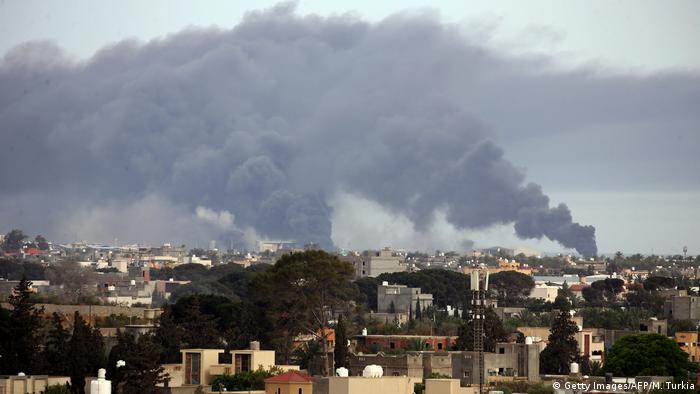 The Turkish government on Sunday warned Libyan strongman Khalifa Haftar against attacking diplomatic missions after positions near Turkish and Italian missions were hit earlier this week.

"If our missions and our interests in Libya are targeted, we will deem Hafar's forces legitimate targets," said a statement from Turkey's foreign ministry. "It is unacceptable for the United Nations to remain silent against this carnage any longer."

Turkey has thrown its weight behind the UN-backed Government of National Accord, which is based in Tripoli. Russia, the UAE and Egypt have supported Haftar, who enjoys the support of a rival government based in Tobruk.

"Countries providing military, financial and political aid to Haftar are responsible for the suffering that the people of Libya are enduring and the chaos and instability the country is being dragged into," said the Turkish ministry.

The UN Support Mission in Libya (UNSMIL) called on Haftar's so-called Libyan National Army to end "indiscriminate attacks." It said that the attack on the airport occurred while a civilian plane was prepare to depart.

and reiterates its call for those responsible for crimes under international law to be brought to justice," the UN mission said.

In 2011, Libya plunged into chaos after dictator Muammar Gaddafi launched a brutal crackdown against anti-government protesters. NATO-backed rebels eventually defeated the regime and killed Gaddafi. Since then, warring factions have fought a bitter war for power of the North African country.

Earlier this year, the German government spearheaded efforts to establish a peace process to end the conflict.

Militias opposed to the UN-backed government in Tripoli are trying to seize control of ports at al-Sidra and Ras Lanuf. Forces closely tied to the central government have launched airstrikes in a bid to regain control. (04.03.2017)

The commander of the Libyan National Army said his forces had a "popular mandate" to rule Libya. He also declared an official end to a UN-brokered political agreement that attempted to establish a unity government. (28.04.2020)