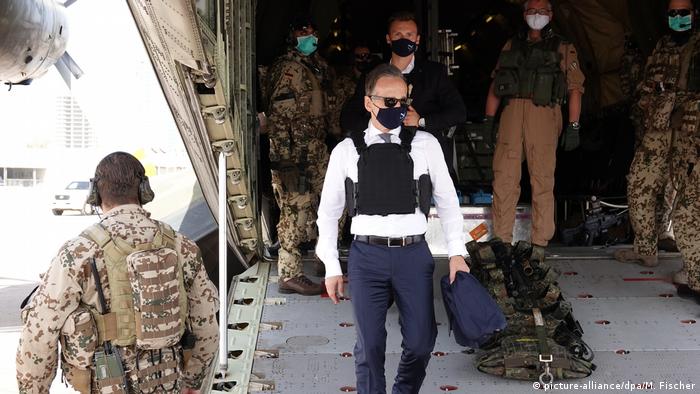 German Foreign Minister Heiko Maas arrived in Libya on Monday on a previously unannounced visit — his first since a Berlin summit in January that failed to bring peace to the war-torn country.

"We see a deceptive calm in Libya at the moment," he said in a statement on his arrival. "Both sides and their international allies are continuing to arm the country on a massive scale and are maintaining conditions for a cease-fire," he added.

In talks with Prime Minister Fayez Serraj from Libya's internationally recognized government in the capital, Tripoli, Maas is to discuss how to reach peace with military strongman Khalifa Haftar.

Haftar has the support of a rival administration based in Tobruk, and Egypt, Russia and the United Arab Emirates (UAE) also back him. Serraj enjoys support from Turkey and Qatar.

Maas will also push for a demilitarized zone to be set up around the strategically important city of Sirte on the Mediterranean coast, currently held by Haftar's troops. The proposal was put forward by the United Nations.

The city could soon become the arena for a major military confrontation, with government troops vowing to take back the city amid threats by Egypt to intervene militarily if they attack.

European countries would like to see the conflict in the North African nation resolved partly because the lawlessness it has created has allowed people smugglers to use Libya as a base to send migrants over the Mediterranean to Europe.

It deprives the GNA of military aid "to counter the aggression" of Haftar but "does not monitor the arrival of arms and mercenaries by air, sea and land via Egypt" in support of Haftar, he said.

Maas said the situation of refugees in Libya will also be discussed during his visit.

"We have been demanding for some time that the detention centers be closed and called for alternatives to be set up in city areas," he said, adding that smuggler networks also needed to be effectively tackled.

Maas is to fly on to the UAE on Monday evening, where, according to his statement, he will also discuss the conflict in Libya, along with issues related to Iran, Syria, Qatar and Lebanon.

He is set to urge his counterpart to use the UAE.'s influence with Haftar "in line with the Berlin summit.''

"Only those who take part in a political process will be part of Libya's future,'' Maas said.

The EU has launched the Irini naval mission to help monitor a UN arms embargo for Libya, while Germany, France and Italy have launched an initiative to impose EU sanctions on those that supply means to transport weapons.

Libya has been in a state of almost continual internal conflict since 2011, when then dictator Moammar Gadhafi was ousted in a NATO-backed rebellion.