Egyptian President el-Sissi has warned of a military intervention to protect Egypt's border with Libya. The move could bring Egypt and Turkey, who support rival sides in Libya's proxy war, into direct confrontation. 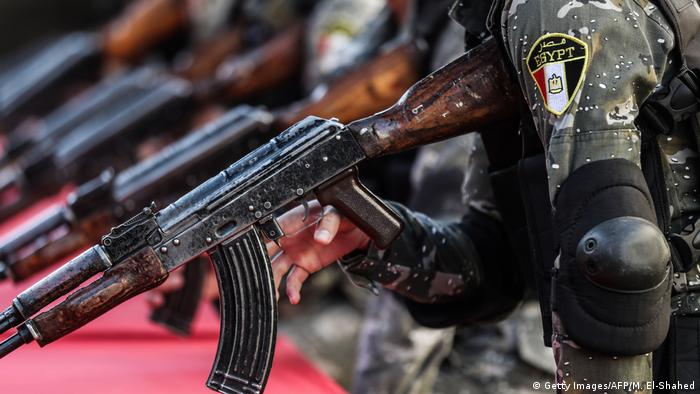 Egypt's House of Representatives, which is filled with el-Sissi supporters, said after a closed-door session that armed forces could be deployed outside the country to fight "criminal militias" and "foreign terrorist groups" on a "western front," but did name Libya directly. It said the troops would be defending Egypt's national security.

The move could bring Egypt and Turkey, who support opposite sides in the Libya's chaotic proxy war, into direct confrontation.

El-Sissi said last week that Egypt, which shares its western porous desert border with Libya, would not stand idle if there was a threat to the nation's security. He also warned that the strategic coastal city of Sirte was a "red line," and that an attack on the town by Libyan government forces would prompt Cairo to intervene.

Libya has been in the throes of civil war since a NATO-backed uprising in 2011 that toppled longtime dictator Moammar Ghadafi. Control over the oil-rich nation is currently split between a UN-supported Tripoli government in the west and military strongman Khalifa Haftar and his Libyan National Army (LNA) in the east.

Egypt has been backing Haftar, along with the United Arab Emirates and Russia, while Tripoli government forces have been supported by Turkey, Italy and Qatar.

With the help of Turkish support, government forces last month ended a 14-month offensive by the LNA in Tripoli. It was a major setback for Haftar, who has sought to unify Libya by force.

Since reclaiming Tripoli, government forces have pushed eastward toward Sirte, which lies 800 kilometers (500 miles) from the Egyptian border. The city, which is the late Ghadafi's hometown, is a gateway to Libya's most important crude export terminals.

Before Monday's vote, the Egyptian presidency said el-Sissi had spoken with US President Donald Trump and assured him that Egypt would "prevent further deterioration of security in Libya." The two leaders agreed to maintain a ceasefire to avoid any escalation.

The US, which is close allies with both Egypt and Turkey, has sent mixed signals to the rival sides over the course of the war. However, Washington has grown concerned with Russia's presence in Libya after hundreds of Russian mercenaries backed Haftar's failed attempt to capture Tripoli.

The African Union marks its 18th birthday on July 9, 2020. Launched to help transform Africa into an oasis of peace and development, the AU's dream for the continent is still a distant one, writes DW's Isaac Mugabi. (08.07.2020)

The Libyan authoritarian's aims extend far beyond his claims to be ridding the country of Islamists. And that's exactly what his foreign backers want, analysts say. (26.02.2020)