The UN says both sides in the Libyan civil conflict have reached a permanent cease-fire agreement. The world body called the deal a "historic achievement." 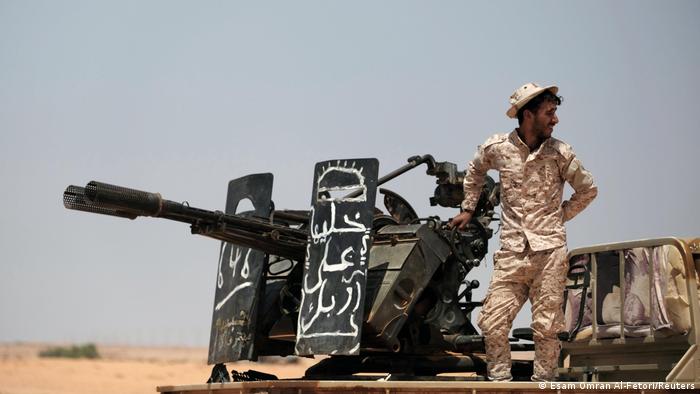 The two warring sides in Libya's long-running civil conflict have signed an agreement to put in place "a permanent cease-fire in all areas of Libya," the United Nations said in a Facebook post on Friday.

The accord signed on Friday is to be followed by political discussions in Tunisia next month.

UN Secretary-General Antonio Guterres hailed the cease-fire as a ''critical step,'' adding that ''there is much hard work ahead'' to reach a solution to the conflict.

"This is a fundamental step toward peace & stability. Too many people have suffered for too long. Too many men, women & children have died as a result of the conflict," he wrote on Twitter.

Libya has been in the grips of a conflict since 2014 pitting an UN-backed government in the capital, Tripoli, against rival authorities based in the east of the country. The conflict has drawn in a number of local militias in addition to regional and foreign powers.

Like many previous diplomatic efforts to resolve the conflict, Friday's deal may well be foiled in the long run by the complex nature of Libya's political and sectarian landscape.

The UN said, however, that the agreement was an "important turning point towards peace and stability in Libya."

"The road to a permanent cease-fire deal was often long and difficult," said UN envoy for Libya Stephanie Turco Williams, who mediated in talks between the two sides.

She voiced the hope that the deal would succeed "in ending the suffering of Libyans and allowing those displaced by the conflict to return to their homes."

On Wednesday, Williams said there had been agreements to open air and land routes in the country and to take measures to get Libya's vital oil industry up and running once more.

'EU will be there to support'

"The cease-fire agreement is the first ray of hope for the people of Libya in a long time," German Foreign Minister Heiko Maas wrote on Twitter.

EU foreign policy chief, Josep Borrell welcomed the news in a statement on Twitter, saying that the deal "is also a crucial step for resumption of political negotiations and hopefully a turning point in Libyan crisis. EU will be there to support."

"I think we need the strongest possible call on all parties to disarm, respect and implement the cease-fire," Stoltenberg said.

Though NATO is not on the ground in Libya, he said the organization supported UN efforts. "We have the Berlin process and NATO supports also that initiative, which is actually underpinning the UN-led effort," he noted.

The UN's Williams said that under the new agreement armed groups and military units had agreed to return ''to their camps'' and that the deal would take effect immediately.

Foreign mercenaries, thousands of Syrian fighters deployed by Turkey and Russia on opposite sides of the war, are also ordered to depart "from all Libyan territories land, air and sea" within three months, Williams said.

The agreement also involves the formation of a joint military force and a way to monitor violations, she added said.

Libya has been in a state of political and social chaos since its longtime dictator Moammar Gadhafi was ousted and killed in a NATO-backed uprising in 2011.