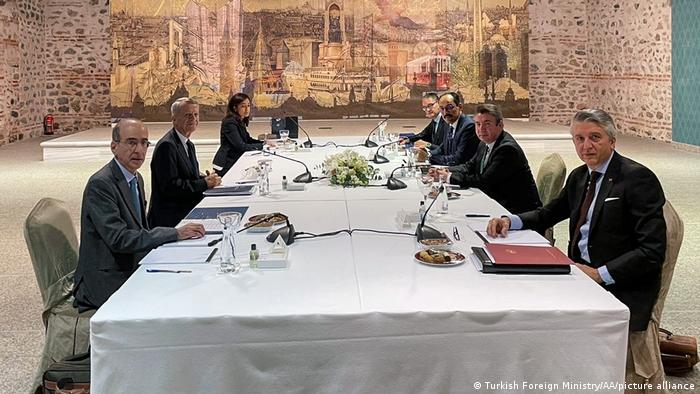 Ambassadors, ministers and other key political figures from Turkey and Greece met at Dolmabahce Office in Istanbul

Greece and Turkey have held their first direct talks in nearly five years over their acrimonious eastern Mediterranean standoff.

The 61st round of discussions between the neighbors and fellow NATO members took place in Istanbul on Monday.

There is some anticipation that the meeting could help thaw the frosty relationship between the two countries. The consultations were described as "exploratory," with the expectation for more formal meetings to follow.

The United States said it "welcomes" the resumption of contacts, while Germany called them the "positive [sign] we have been waiting for for some time."

Tensions between Ankara and Athens were inflamed last year when Turkish President Recep Tayyip Erdogan declared he had "opened the gates to Europe," sparking an exodus of refugees to the Turkey-Greece border which spans some 200 kilometers (120 miles).

The two nations have also been at loggerheads over natural gas reserves and maritime boundaries, with both claiming the right to drill for resources in the same part of the East Mediterranean.

The standoff with both Greece and Cyprus last summer saw Turkey send exploration vessels into contested waters, EU allies dispatch ships to the region to back Greek claims and both Ankara and Athens conduct military maneuvers with warships and fighter jets.

The EU had threatened to impose sanctions on Turkey. But after a virtual meeting with his 26 EU counterparts on Monday, German Foreign Minister Heiko Maas, who was in Turkey last week, said the ministers had decided to hold off on those measures for the time being.

"We did not decide to sanction Turkey today, because we see that there are positive developments," he said. "There are no Turkish ships in the contested areas in the eastern Mediterranean anymore; exploratory talks between Turkey and Greece have begun this evening in Istanbul. Those are all positive signals that we had waited for for a long time, which should now not be strained by sanctions."

Cigdem Nas, associate professor of international relations and secretary general of the Economic Development Foundation of Turkey, told DW that Monday's talks are not only important for Turkey's bilateral relations with Greece, but will also play a key role in the country's relations with the EU.