EU leaders have warned that Turkey could face sanctions if it does not cease its "provocations and pressures." The bloc also said it would reward Ankara for good behavior. 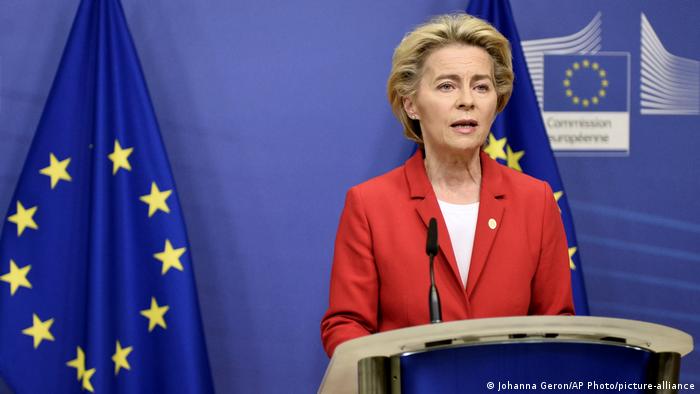 The European Union on Friday threatened to impose sanctions on Turkey amid increasingly tense ties with Ankara over its continued drilling for gas in the East Mediterranean, and its roles in regional conflicts.

"We want a positive and constructive relationship with Turkey, and this would also be very much in Ankara's interest," European Commission Chief Ursula von der Leyen said after a meeting of the EU leaders.

"But it will only work if the provocations and pressures stop. We, therefore, expect that Turkey from now on abstains from unilateral actions," von der Leyen said.

"In case of such renewed actions by Ankara, the EU will use all its instruments and options available. We have a toolbox that we can apply immediately."

The EU warning comes amid growing calls within the 27-nation bloc to take a tougher stance against Turkey over its aggressive actions in the East Mediterranean.

Earlier on Thursday, Austrian Chancellor Sebastian Kurz called for ending EU accession talks with Turkey and for imposing sanctions on the country.

He criticized Ankara's slide into authoritarianism and said its recent gas exploration efforts in the East Mediterranean were a clear infringement of international law.

"We finally need to see a clear reaction to Turkey's actions," Kurz said in Brussels. "The European Union has to finally set up red lines for President (Tayyip) Erdogan, meaning an end of accession talks and sanctions against Turkey."

Tensions began when Turkey sent a gas exploration vessel in the disputed waters. There are no agreed maritime borders between Turkey, Greece, and Cyprus in the East Mediterranean, but Ankara has said it has a legitimate claim in the area.

Military vessels were deployed by both Turkey and Greece, and a war of words erupted between the two sides.

Last month, the Turkish seismic research vessel left the contested waters in the first sign of easing tensions. But Erdogan's Defense Minister said that it did not mean that Turkey was "giving up" on jockeying for position in the East Mediterranean.

EU leaders added that if Ankara continues efforts to stop its provocative actions, the bloc has "agreed to launch a positive political EU-Turkey agenda," according to a joint statement seen by news agency DPA.

European Council President Charles Michel said that the EU leaders have backed a two-pronged approach that offers incentives and deterrents.

The incentives include modernization of customs union, closer trade ties, and an improved EU-Turkey migration deal, he said. "We will monitor closely the situation week after week," Michel added.

Meanwhile, during a speech in the Turkish parliament, President Erdogan described his country's operations in the East Mediterranean as its most important "naval struggle of the past few centuries."

He went on to say the EU was an "ineffective, horizonless and shallow" structure that has become a "slave to the conceit" of Greece and Cyprus.

Erdogan added that he was committed to dialogues to resolve disputes.

Just last week, European Council President Charles Michel took a swipe at the UK over its threats to renege on parts of the EU withdrawal treaty it signed in January. Now, repercussions are becoming reality.