These live updates are now closed. To read more on how the three-day event unfolded please click here. 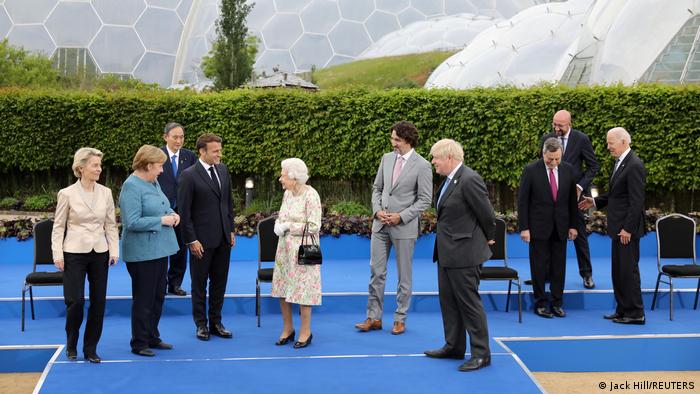 Criticism from health and environment campaigners followed the release of the final G7 communique.

"This G7 summit will live on in infamy," said Max Lawson, the head of inequality policy at international aid group Oxfam.

"Faced with the biggest health emergency in a century and a climate catastrophe that is destroying our planet, they have completely failed to meet the challenges of our times."

Campaigners also complained that the G7 failed to go into details about how it will pay for a newly agreed "Nature Compact" — aimed to protect 30% of the world's land and oceans from further destruction by 2030.

Additionally, the 1 billion coronavirus vaccine doses for poorer countries falls far short of the 11 billion doses the World Health Organization said is needed to vaccinate at least 70% of the world's population and truly end the pandemic.

International Olympic Committee (IOC) president Thomas Bach meanwhile thanked "G7 leaders for their support" for the Tokyo games that were postponed for a year due to the coronavirus pandemic.

"We take this as a great encouragement to deliver safe and secure Olympic and Paralympic Games Tokyo 2020 for everybody in this spirit of worldwide solidarity," Bach said.

The Bidens emerged from a Land Rover on Sunday to meet the awaiting queen before inspecting the Guard of Honor assembled on the castle grounds. 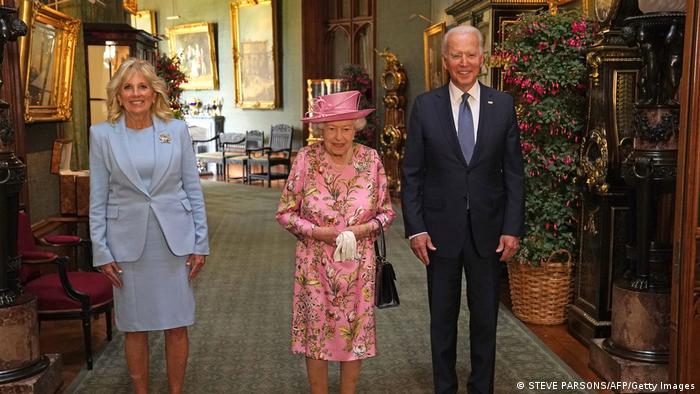 The queen and the US first lady stayed on a dais as Biden walked along the guard. Once Sunday's inspection was completed, the queen and the Bidens headed into the castle for tea.

Following the visit, Biden said "I don't think she'll be insulted, but she reminded me of my mother." 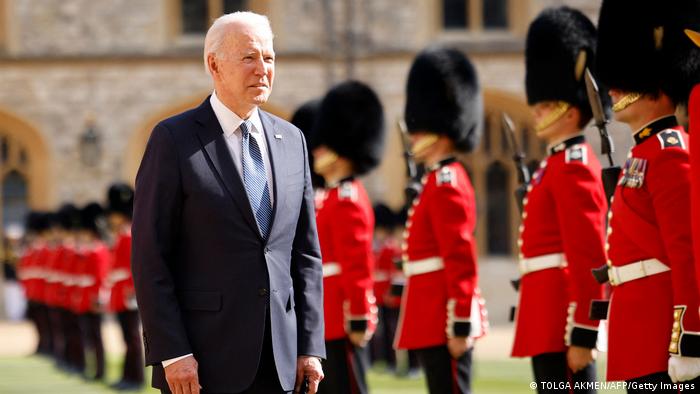 G7 leaders welcome a US comeback

US President Joe Biden said his fellow leaders agreed that "America is back at the table and fully engaged," following a period of "America First" protectionist policy under former president Donald Trump.

Here's a roundup G7 leaders' comments on Biden at the summit.

A "big breath of fresh air" is how British Prime Minister Boris Johnson, host of the summit in southwest England, described Biden, He told reporters Sunday that the G7 stood united anew in its "democratic values." 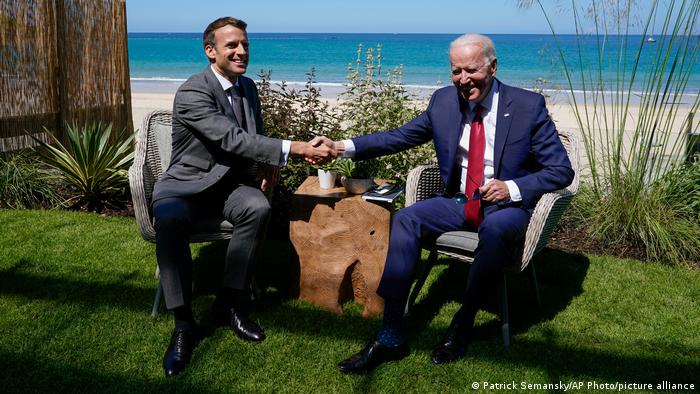 French President Emmanuel Macron told reporters that it was a relief that he was now working with an American president who he termed was "willing to cooperate."

"What you demonstrate is leadership is partnership," Macron said of Biden.

Macron and Biden appeared to have built up quick chemistry during the in-person summit. The two draped their arms around each other and chatted animatedly when they walked together after the leaders' photo on Friday.

US President Joe Biden said democracies were "in a contest with autocratic governments around the world" in his final address at the G7 conference.

"We're in a contest, not with China per se, ... with autocrats, autocratic governments around the world, as to whether or not democracies can compete with them in a rapidly changing 21st century," said Biden.

He indicated Russia had its own problems to "chew on," saying its president, Vladimir Putin, had not changed.

"Let me make it clear I think he's right it's a low point, and it depends on how he responds to acting consistent with international norms, which in many cases he has not," Biden told reporters.

The US president also stressed that his country was making a comeback in international diplomacy, following Trump.

"America's back in the business of leading the world alongside nations who share our most deeply held values,'' Biden said, before leaving Cornwall to visit Queen Elizabeth II at Windsor Castle. "I think we've made progress in reestablishing American credibility among our closest friends."

Biden said he does not view NATO as a "protection racket." Trump had often criticized European member states for what he viewed as too low financial contributions to the organization.

Biden also reported that global leaders were gratified that he accepted the science of climate change: "One of the things some of my colleagues said to me when I was there was, 'Well, the United States' leadership recognizes there is global warming,''' Biden said.

The final communique from the G7 meeting has been released to some media outlets.

On the coronavirus, the document:

On climate change and environment it:

On Russia, the document:

On other human rights issues, it:

On global economic issues, it:

G7 leaders said in their draft communique that China must respect human rights in Xinjiang as well as allow Hong Kong freedoms. The group also expressed concern over what it called Beijing's growing influence in the East and South China Seas, and in the Taiwan Strait.

"We will promote our values, including by calling on China to respect human rights and fundamental freedoms, especially in relation to Xinjiang and those rights, freedoms and high degree of autonomy for Hong Kong enshrined in the Sino-British Joint Declaration," the G7 said in the communique that was almost finalized.

DW correspondent Alexandra von Nahmen says G7 leaders have agreed to increase their financial support "to make sure that they will be able to mobilize €100 billion for poorer nations to cope with the coincidences of climate change and to help them switch to clean energy."

"However, this promise was already made a decade ago and so far the leaders have not managed to live up to their promises," von Nahmen told DW. Therefore, they are "now saying they are definitely going to increase financial spending," she added.

G7 leaders called for a transparent, science-based study into the origins of COVID-19 convened by the World Health Organization, according to the draft communique.

"We call for a timely, transparent, expert-led, and science-based WHO-convened Phase 2 COVID-19 Origins study including, as recommended by the experts’ report, in China," it said.

Merkel on vaccines and infrastructure projects

German Chancellor Angela Merkel said she hopes that a new G7 task force can present details of the first infrastructure projects in developing countries in 2022.

She also said that 2.3 billion COVID-19 vaccine doses should be distributed to low-income countries by the end of next year.

"Germany is responsible for 350 million doses," Merkel said. That includes 30 million doses that Germany had ordered and would distribute, she said. "That will probably be more over time."

The G7 group has "agreed that the pandemic can only be defeated globally," she said. "The way out of the pandemic is vaccines," she stressed.

Speaking about coal, for which the G7 leaders are facing pressure to phase out state subsidies, Merkel said the delegates had not agreed on a date for ending the use of the fossil fuel.

South African President Cyril Ramaphosa, who has joined the summit for its last day, urged the G7 to help finance the World Health Organization's program to increase COVID-19 testing, diagnostics and vaccines.

"We need to address the substantial financing gap for tests, treatments, critical supplies like oxygen and the health systems that enable testing, treatment and vaccination," Ramaphosa said in the presidency statement, referring to the Access to the COVID-19 Tools Accelerator.

G7 countries will provide one billion COVID-19 vaccine doses over the next year and work with the private sector and other countries to increase the contribution over the next months, according to a communique draft.

"The commitments since we last met in February 2021 including here in Carbis Bay provide for one billion doses over the next year," the communique said.

"We will work together with the private sector, the G20 and other countries to increase this contribution over the months to come," it added.

He said at least 11 billion doses are needed to vaccinate at least 70% of the world's population by the middle of next year.

"We need more and we need them faster,'' Tedros said.

Speaking from Cornwall, England, where the G7 summit is taking place, von Nahmen says leaders are expected to discuss the phasing out of diesel and patrol cars as well as ending the use of coal "as soon as possible." She added that the leaders are unlikely to specify a deadline.

Concerning relations between the West and China, von Nahmen said: "The US is pushing and hoping for a united front to counter China's rise," with European countries being "very cautious not to push it too far to the extent that it would prevent any cooperation with China."

"What we expect from the (final) communique is to strike a balance, to stress that it is important to work on global issues with Beijing such as climate change," she said, adding that the G7 would also be expected to "call out China for human rights abuses" and that the Chinese government should "use fair methods to compete with western economies." 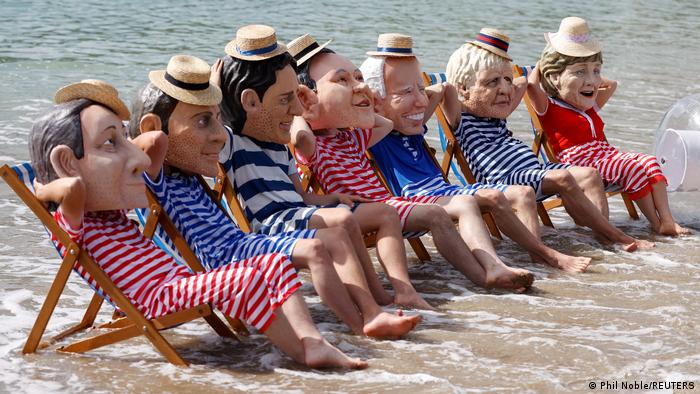 The heads of state plan to commit to steps to limit state subsidies for fossil energy sources.

The US, Germany, Britain and Canada say they intend to provide developing countries with up to $2 billion (€1.65 billion) to accelerate their phase-out of coal.

A White House statement also said that the G7 would coordinate climate targets so that the goal of limiting global warming to 1.5 degrees above pre-industrial levels — as outlined in the Paris climate agreement — remains "within reach."

In remarks released ahead of his speech, Attenborough said global warming and loss of biodiversity are "beyond doubt," as is the fact that "our societies and nations are unequal."

"The question science forces us to address specifically in 2021 is whether, as a result of these intertwined facts, we are on the verge of destabilizing the entire planet."

"If that is so, then the decisions we make this decade, in particular the decisions made by the most economically advanced nations, are the most important in human history," Attenborough added.

The third and final day of the G7 summit takes place in Cornwall, England, on Sunday.

The UK wants to use the summit to coordinate global climate targets and persuade world leaders to agree on tougher climate measures, such as the phasing out of coal.

The heads of state and government will discuss steps on how to limit state subsidies for fossil energy sources as well as how to accelerate the phase-out of coal.

The US leads efforts to create a western alternative to China's New Silk Road project, but the EU is wary of setting up an anti-China coalition. Bernd Riegert reports from Carbis Bay.