The Tokyo Olympics organizing committee has rejected the notion of canceling or postponing the Games while President Joe Biden is offering Americans free beer to get vaccinated. Follow DW for the latest. 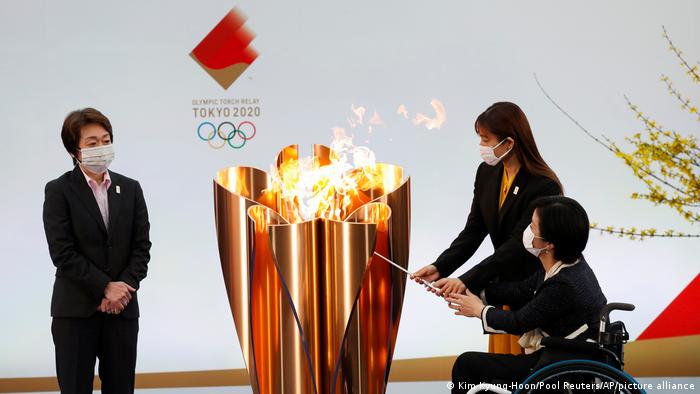 The head of the Tokyo Olympics 2020 organizing committee has again dismissed suggestions of canceling the Games as doubts swirled among city governments.

Opinion polls in Japan continue to show more than half of those surveyed do not want the Games to go ahead but organizing committee president Seiko Hashimoto told the Nikkan Sports newspaper: "We cannot postpone again."

Spectators coming from abroad will not be permitted into venues but officials are still undecided if locals will be allowed to watch the events unfold. Economy Minister Yasutoshi Nishimura said Thursday that excited fans, cheering in close proximity, could pose a contagion risk.

The government of Ota City, some 80 kilometers (50 miles) to the north of Tokyo, has been inundated with complaints over a decision to give preferential vaccinations to staff tending to athletes who are in the area for training.

And Shigeru Omi, Japan's top medical adviser, has become increasingly vocal over concerns that he and other medical experts have about staging the Games. He has even suggested that his medical advice is being ignored by the International Olympic Committee (IOC).

Meanwhile, Kurume City will no longer be hosting Kenya's pre-Olympics training camp, and a player on Ghana's soccer team tested positive for the coronavirus after arriving in Japan for a friendly match.

The Olympics are scheduled to start on July 23.

Here's a selection of other coronavirus-related news from around the world.

Medical experts at the the Children's Hospital of Philadelphia and the University of Pennsylvania have suggested that leading vaccines will offer lasting protection that could diminish the need for frequent booster shots.

But researchers say further is still required and that virus mutations are still the biggest concern over long-lasting protection.

A global summit to advance access to vaccines has secured nearly $2.4 billion (€1.97 billion) for the WHO's COVAX sharing-scheme.

COVID-19 Special: To waive or not to waive vaccine patent rights

Bahrain has begun offering a booster shot of the Pfizer-BioNTech coronavirus vaccine for some
people six months after they received two shots of China's Sinopharm vaccine.

Those living in Bahrain can register for a booster of either Pfizer-BioNTech or  Sinopharm through its BeAware mobile phone app. But now the government recommends people over 50, the obese and people with weakened immune systems to receive the Pfizer shot regardless of if they first received Sinopharm.

China is speeding up its vaccination campaign after a slow start. In just five days in May, China gave out 100 million shots of its COVID-19 vaccines. Public health officials hope to
inoculate 80% of the population of 1.4 billion by the end of the year.

Malaysia's Health Ministry reported 103 coronavirus-related deaths on Thursday,  taking the pandemic total to 3,096. Most of the victims had "prior health conditions like diabetes, high blood pressure and stroke," said Noor Hisham Abdullah, the ministry's director general.

For weeks, Malaysia has been recording the heaviest daily caseload, measured per capita, of the 10 member-states of the Association of Southeast Asian Nations (ASEAN). Daily case numbers in Malaysia have since mid-May surpassed the record set in February of just over 4,500. Over 9,000 infections were reported on Saturday, the most in a single day.

The Southeast Asian country this week imposed two weeks of "total lockdown," tightening a third lockdown in place since May.

The Indian government has announced a deal with domestic vaccine producer Biological-E for 300 million doses to the cost of 15 billion rupees ($205.62 million, €168.3 million).

The vaccine, which is currently undergoing phase-3 clinical trials, will likely to be available in the coming months, the health ministry said.

A coronavirus which Vietnam authorities thought was a combination of the "Kappa" and "Alpha" variants, that originated in India and the UK, is not a new hybrid. It has turned out to be part of the existing "Alpha" variant, the World Health Organization's (WHO) representative in Vietnam told Nikkei.

"There is no new hybrid variant in Vietnam at this moment based on WHO definition," Kidong Park said in an interview with the newspaper, adding that it was within the delta variation that originated in India.

Fifteen more infections have been reported in the southern Chinese province of Guangzhou, with a report saying the COVID variant in the latest outbreak is spreading faster than in previous instances.

Anyone wishing to leave the province has to show a negative virus test taken within the past 72 hours while the city of Guangdong has locked down several neighborhoods.

Taiwan's health ministry will receive an extra T$79.2 billion  ($2.87 billion) to fight the pandemic, as the government laid out the details of a stimulus package approved earlier this week.

The Democratic Republic of Congo (DRC) had detected a surge in COVID-19 cases in May in the capital Kinshasa, the WHO said on Thursday.

"An exponential rise in the spread of SARS-Cov-2 virus has been recorded in Kinshasa," the WHO said as a DRC health ministry official confirmed "the third wave of Covid-19 is already there, it's the Indian (Delta) and South African (Beta) variants."

The World Health Organization has warned that Africa is not ready for the third wave of the pandemic. It urged governments across the continent to "urgently" expand their facilities so that their health care systems do not become overwhelmed.

President Joe Biden has said there will be an array of incentives for Americans to get their vaccine. Free beer and free childcare are among the enticements available as a way of encouraging people to get vaccinated.

The US government is hoping to get 70% of adults at least one vaccine shot by July 4.

Separately, the White House is keen have a vaccine for the next pandemic within 100 days of recognizing a potential viral outbreak.

For COVID-19, one was available in under a year — a feat in itself — but the US' new chief science adviser, Eric Lander, said he wanted the next vaccine even faster.

COVID-19 Special: Focus on Canada – is this the turning point?

Argentina's largest oil workers union is threatening to go on strike over the government's refusal to allow it to privately purchase vaccines.

The Rio Negro, Neuquen and La Pampa Private Oil and Gas Union said it would wait for government authorization until the end of next week. If it doesn't receive permission to purchase vaccines by then, a strike will be called.

Chile has raised the minimum age of AstraZeneca vaccine recipients to 45.

Guatemala says the US is sending it half a million doses as part of the new vaccine sharing plan unveiled today.

Germany's nationwide incidence rate is continuing to fall, this time from 36.8 on Wednesday to 34.1 on Thursday.

The Robert Koch Institute (RKI) reported 4,640 new infections on Thursday, which is also following a downward trend, when comparing the figure to one week ago. The RKI reported 166 deaths in its daily update.

The UK has removed Portugal from its green list in a major blow for tourism. The move mandates quarantine for anyone traveling from the country. Portugal said it could not understand the logic of the British government.

Britain recorded 5,274 new infections, its highest daily total since March 26. Another 18 people died within within 28 days of a positive test.

France's seven-day moving average of daily COVID-19 deaths has dropped below 100 for the first time since
October 27.

The pandemic and migrant labor

Employment will not recover from COVID pandemic until 2023 — report

The loss of jobs during the coronavirus pandemic has destroyed "five years of progress" a new UN report has revealed. And the situation is not expected to recover any time soon.

Coronavirus infections in Germany have passed 250,000 in a single day for the first time since the beginning of the pandemic.