With Tokyo still under a state of emergency, opposition to hosting the games is growing. On Wednesday, a top health adviser said it was "not normal" to host them. 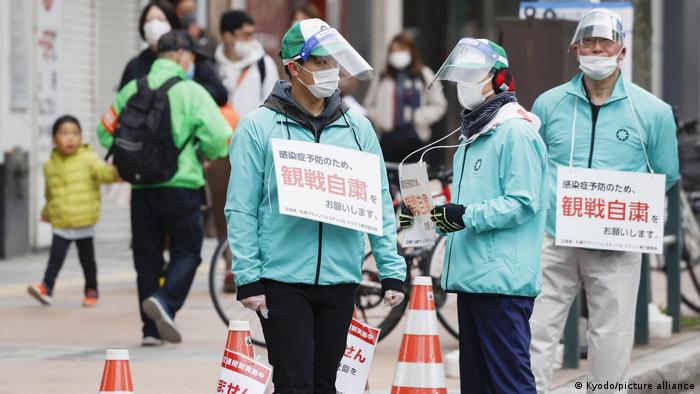 Like many in Japan, Olympic volunteers fear the health risks of pushing forward with the massive event

On Wednesday, the organizing committee of the Tokyo Olympics and Paralympics confirmed reports by Japanese state broadcaster NHK that 10,000 of the 80,000 volunteers for the $15.5 billion (€12.7 billion) event — scheduled to begin on July 23 after a year's postponement due to the coronavirus pandemic — have quit.

Though roughly 1,000 volunteers are said to have quit in protest to sexist comments by former Organizing Committee President Yoshiro Mori, who resigned in February 2021 following the incident, most are thought to have left over potential health risks related to the coronavirus.

"There is no doubt that one of the reasons is the concern over coronavirus infections," Organizing Committee CEO Toshiro Muto said in Tokyo. Volunteers have not been told whether they will be tested, let alone vaccinated before the event.

"There is zero information about that," as Barbara Holthus told dpa news agency. Holthus, deputy director of the German Institute for Japanese Studies in Tokyo, signed up as a volunteer for the Olympics.

Japanese health adviser: 'Not normal to host the games'

"It is not normal to host the games in the current situation," the medical expert told parliamentarians.

Omi urged those insisting that the games go on regardless to explain why: "It is only when there is a clear reason to host the games that the public will get on board ... it is very important for those involved in the Olympics to clarify their vision and the reason for hosting the games."

Omi also emphasized that, if the games were in fact held, "I think it is the Olympic organizers' responsibility to downsize the scale of the event and strengthen coronavirus control measures as much as possible."

No cheering, no high-fives, no tests?

It has been reported that the Japanese government, beyond measures like banning loud cheering and high-fives, is considering whether spectators — if allowed — should be required to present current negative test results before being allowed entry to venues.

Besides volunteers, who make up the largest bloc of participants, thousands of athletes, officials and media would descend on Japan if the games were to be staged. Last week, a state of emergency in Tokyo and other areas was extended to June 20.

Though organizers and politicians are holding fast to the plan of carrying on regardless, a growing majority of Japanese citizens want the event postponed again or canceled altogether amid surging coronavirus cases and a slow vaccination offensive.

According to Reuters news agency, only 2.7% of Japanese have completed inoculations.