Officials have announced that the German and French leaders are to deliver a joint address to the European Parliament. In the first such speech since 1989, the pair is expected to warn of the perils faced by the EU. 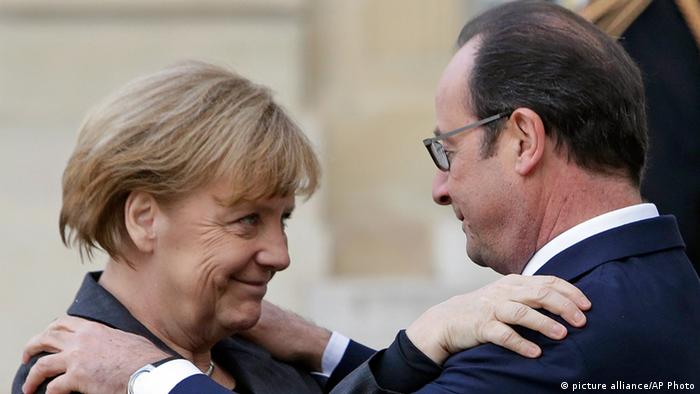 Parliamentary officials said on Monday that Chancellor Angela Merkel and her French counterpart Francois Hollande would make a speech to the European Parliament in Strasbourg early next month.

The announcement came as diplomats struggled to reach agreement on the continent's migrant crisis - just one of a series of divisive issues seen as posing a threat to the European Union. It will be the first such joint address by a German chancellor and French president since 1989, when Helmut Kohl and Francois Mitterrand visited after the fall of the Berlin Wall.

"This is a historic visit for historically difficult times," EU Parliament President Martin Schulz, a German Social Democrat. "The EU is facing immense challenges and requires strong commitment by its leaders.

Both Kohl and Mitterrand pressed ahead with policies that saw rapprochement with the Soviet Union, and which would eventually lead the bloc to adopt the euro as a common currency.

The bloc is presently at odds over management of the Greek financial crisis, its confrontation with Russia and the possible exit of its second-largest economy, Britain.

However, the most pressing source of discord is the ongoing refugee crisis, which has seen national borders close throughout the passport-free Schengen zone.

While some countries, such as Germany, have said they are prepared to accept a large number of migrants, others - particularly in Eastern Europe - have refused.

Several countries, including Germany, have tightened security on their borders with other Schengen nations, as migrants enter the EU from Turkey and via the Mediterranean. Meanwhile, Hungary has built a fence along the frontier with non-EU member Serbia, as well as along part of its borders with Romania and Croatia.

No deal in the East

As the holder of the rotating presidency of the EU, Luxembourg has been charged with working to broker a compromise between member states.

"We still have 20 hours [...] to come to a conclusion," said Luxembourg Foreign Minister Jean Asselborn. "We know we have to find a European solution."

Interior ministers are to meet on Tuesday in Brussels for talks on the resettlement of some 160,000 migrants from frontline states of Greece, Hungary and Italy.

Sources in Brussels have said EU ministers were considering a watered-down plan to relocate migrants and refugees. The proposals were expected to drop mandatory quotas and leave Hungary out of the scheme altogether.

European Council President Tusk has summoned EU leaders to a special summit next week to discuss the refugee crisis. The EU's interior ministers failed to agree on a quota system to distribute migrants across the bloc. (17.09.2015)