NATO is providing Ukraine with additional support in detecting mines and overseeing its airspace. Secretary-General Jens Stoltenberg made the announcement while also calling on Ukraine to press ahead with reforms. 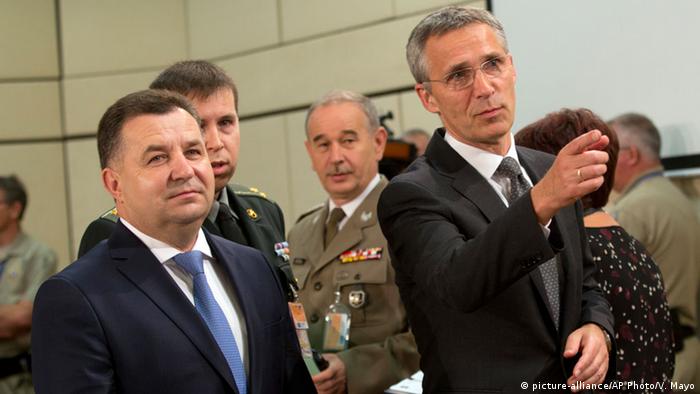 At a meeting of NATO defense ministers and their Ukrainian counterpart, Stepan Poltorak, in Brussels, officials outlined additional support for Ukraine, including aid in defusing roadside bombs. Secretary-General Jens Stoltenberg said NATO would create a trust fund to help with mine removal and detecting and destroying improvised explosive devices in Ukraine's eastern Donbas region. He added, though, that Ukraine needed to reform its military structure in order for NATO's help to prove effective.

"Reforms are essential," Stoltenberg said. "They require a determined effort on the part of our Ukrainian partners." He specifically called corruption a "big and difficult challenge."

"It's a problem for the whole society," Poltorak said of Stoltenberg's criticism.

Stoltenberg also said air traffic controllers in Poland, Norway and Turkey would share security data with Ukraine. Though he didn't mention the incident, belligerents shot down an airliner over eastern Ukraine last July, killing all 298 people on board. Efforts continue to determine responsibility for the downing.

Though fighting has taken place almost exclusively in eastern Ukraine, effects have been felt nationwide.

Ukrainian officials are not alone in accusing Russia of sending troops into the country. However, the Kremlin denies contributing soldiers to the civil war, which has left 6,000 people dead.

On Thursday, NATO's top commander said Russia had built up supplies on the border. US General Philip Breedlove, NATO's supreme allied commander, said the border between Ukraine and Russia remained "wide open," allowing for the free movement of equipment and supplies.

Force levels on Russia's side of the border had not changed much in recent months, Breedlove said, but US military officials had observed in Russia a "stocking of important supplies, ammunition, etc, to levels that would support operations."

NATO will bolster its eastern presence, and the United States has promised additional capabilities to support a rapid response force newly enlarged from 13,000 troops at the start of the year to 40,000. On Thursday, US Defense Secretary Ashton Carter said the equipment would include troop transport planes, surveillance and reconnaissance aircraft, combat helicopters, midair refueling capabilities, and special operations forces. However, he said, the United States had no plans at present to increase the number of troops permanently based in Europe.

A sanctions tit-for-tat is also taking place, with Russia extending a ban on food imports from the United States and EU on Wednesday.