Central Europe's top diplomats will meet Monday to discuss their nations' roles as an EU entry point for refugees. The talks come on the heels of a fresh tragedy in the Mediterranean, which claimed at least 13 lives. 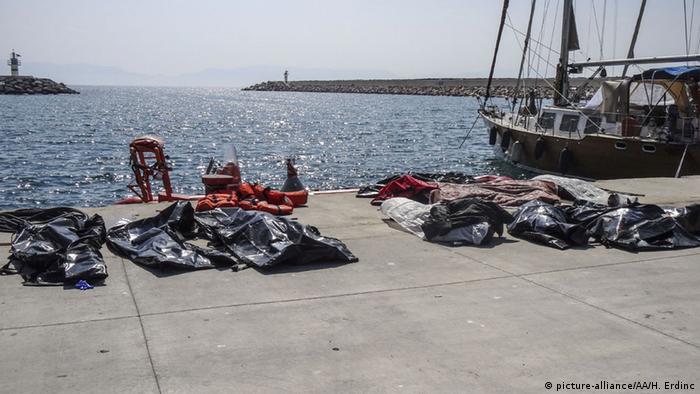 The foreign ministers of the Czech Republic, Poland, Slovakia and Hungary are set to meet for talks in Prague on Monday to discuss the migrant crisis, as they continue to deal with hundreds of thousands of refugees, many of whom have crossed their borders with the hope of continuing on to Western Europe.

The ministers will also meet with their Luxembourgish counterpart, whose country currently holds the rotating EU presidency.

"We will talk [...] about how to solve the issue of the migrants, how Europe should protect its borders," said Polish Foreign Minister Grzegorz Schetyna, adding that it was necessary to "distinguish refugees from economic migrants."

Schetyna also came out firmly against the proposed quota system for redistributing refugees according to national population and wealth. "Each country must be able to decide how many migrants it can receive. Imposing a quota would be, in my view, against European principles," he said.

The Polish diplomat's comments came on the heels of fresh tragedy in the Mediterranean, after at least 13 refugees - six of them children - drowned off the coast of Turkey on Sunday. Turkish media reported that the small inflatable dinghy carrying them to Greece was hit by a Turkish vessel in the dark.

The Greek coast guard, referring to the same incident, reported that they had managed to rescue 22 people from a boat that sank near the island of Lesbos. Greece's Marine Ministry announced that it had launched a search operation for those still missing.

Inside Europe's borders, roughly 10,700 asylum seekers walked into Austria from Hungary on Sunday. Despite Hungary closing its border with Serbia last week and beginning to implement a plan to close off the frontier with Croatia, refugees already in Hungary continued their journey towards northern and western Europe over the weekend.

Almost all of the new arrivals came to the Austrian town of Nickelsdorf, on the border with Hungary, before boarding buses and trains that took them to emergency accommodations elsewhere.

On Sunday, both German Chancellor Angela Merkel and French President Francois Hollande, vocal supporters of a refugee redistribution program, called on their fellow European nations to help shoulder the responsibility for the unprecedented amount of refugees arriving in the European Union.

Speaking on a visit to Morocco, Hollande said any solution to the crisis "must involve all European countries - no one can be exempt or we would no longer belong to the same union built on values and principles."

Merkel, whose country is expected to receive an incredible 800,000 asylum applications this year, urged the rest of the 28-member EU bloc to remember that the crisis is "not just a German challenge, but one for all of Europe."

After EU interior ministers failed to agree on a plan to tackle increased migration last week, European Council President Donald Tusk called a summit for Wednesday for leaders of all 28 countries in an attempt to finally reach a consensus on how best to address the problem.

German police say there has been a fire at planned refugee accommodation in the southwest of the country. Meanwhile, a Syrian refugee is reportedly being questioned over alleged links to the jihadist group IS. (21.09.2015)