The German and French leaders have said they support extending sanctions against Russia over its actions in Ukraine. Merkel cited the 'very sluggish' implementation of last year's peace deal as reason for the renewal. 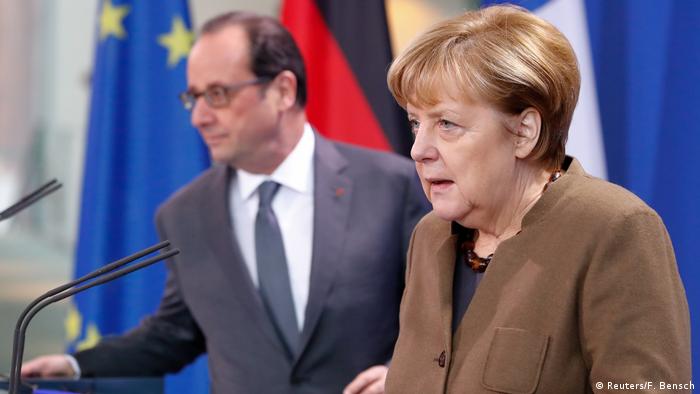 German Chancellor Angela Merkel and French President Francois Hollande said on Tuesday they favored extending EU sanctions against Russia in an upcoming EU summit where the issue will be discussed.

"It will be necessary to extend the sanctions against Russia again - although we would have wished for better progress in the implementation of this process," Merkel told reporters before talks with Hollande in Berlin.

The chancellor said the progress on implementing last year's Minsk ceasefire agreement for eastern Ukraine had been "very sluggish."

"We must continue to apply the terms of the Minsk agreement, and when they are not carried out, we must continue with sanctions," said Hollande, adding that the sanctions did not provide for a sustainable solution.

Despite issuing DW a press pass and promising an interview, Donetsk armed guards turned the team away at their border. The team was held for a hour before being sent back into Kyiv-controlled territory. (12.12.2016)

Interview: Ukraine conflict on the brink

DW sat down with Alexander Hug, Deputy Chief of the OSCE's monitoring mission to Ukraine, to discuss the situation on the ground. He warned of a conflict on the brink of deteriorating. (12.12.2016)

Neither the Ukrainian government nor the pro-Russian separatists waging an insurgency in eastern Ukraine have fully implemented the Minsk agreement.

"Since there hasn't been an effort made, no progress, and the same blockages remain, I, like the chancellor, am in favor of extending sanctions," Hollande said.

The EU's 28 leaders are set to meet in Brussels on Thursday to discuss the sanctions against Russia which will expire on January 31 next year.

There appeared to be consensus amongst most member states to extend the sanctions. Some in the bloc, however, favor lifting the sanctions as Moscow has imposed retaliatory measures that hurt EU farmers.

The sanctions against Russia's energy, defense and finance sectors have been in place since July 2014.

In their short statements to the press on Tuesday, neither leader discussed the rise of populism or the upcoming 2017 election year. National elections in France, the Netherlands and Germany represent a major test for the European political establishments' ability to withstand growing populist movements.

The trip is likely the last Hollande will make as French president to Berlin.

Hollande has already said he will not run for a second term in France's presidential race while Merkel has announced plans to run for a fourth term in September.

Later on Tuesday, Merkel and Hollande are set to attend the German-French digital conference about digitizing both countries' economies. German Economy Minister Sigmar Gabriel and his French counterpart Michel Sapin were also to take part.