Ukraine's president has urged the EU to stay the course on sanctions for Russia until the Minsk agreement is implemented. A summit involving Petro Poroshenko and EU leaders focused on reforms and visa liberalization. 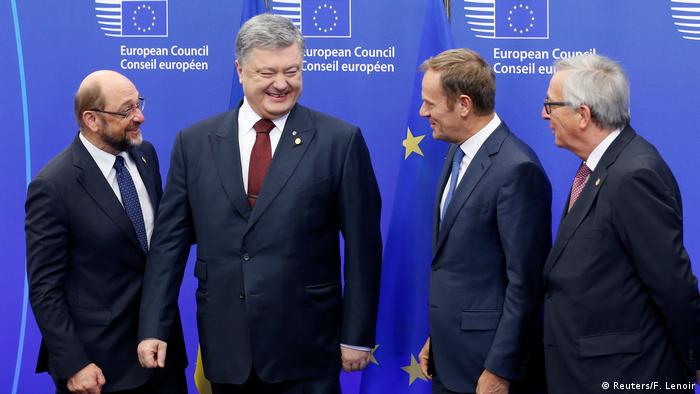 "The last three years have seen the birth of a new Ukraine that advances its democracy and economy through sometimes very tough reforms," Tusk said following the 18th EU-Ukraine summit.

Poroshenko called for sanctions against Russia to remain until the "territorial integrity and sovereignty of Ukraine are fully restored," including Crimea.

"The European Union is under very severe attack on their principles by populists, by nationalists, by euroskeptics and by Russia," Poroshenko said, adding that despite this he was "confident and absolutely sure" about the good shape of the EU in future.

The leaders also emphasized progress on an association agreement between the EU and Ukraine, despite a Dutch referendum in April which saw the majority of voters reject the accord. Tusk hoped a solution would be found by the end of the year.

"My goal is clear: finish the ratification process of the association agreement. This agreement is not only of mutual economic benefit but more importantly it carried great geopolitical significance," Tusk said.

The rejection of an EU association agreement by Ukraine's then-government in 2013 sparked the Euromaidan protests, which was followed by the revolution, Russia's annexation of Crimea and ongoing conflict with pro-Russia insurgents in the east.

Tusk said he had spoken to both Dutch Prime Minister Mark Rutte and Poroshenko.

"We are working hard to find a solution that will allow the Dutch to ratify, by addressing all their concerns, while fully respecting the interests of Ukraine and making sure that the remaining 27 [EU member countries] do not need to ratify again," Tusk said.

Tusk also said he was glad all EU member states had decided that Ukraine was ready for visa-free travel to the bloc, which would enter into force following intra-EU discussions on visa policy reforms.

"This discussion does not concern Ukraine any more, as Ukraine has already done its work perfectly," Tusk said, comments that were echoed by Poroshenko.

"I am very happy to hear today that there is some vision that this process will be… finished by the end of this year," Poroshenko said.

The summit also took place in the wake of Donald Trump's victory in the US presidential elections, which raised questions about whether Trump's stated desire to mend Washington-Moscow ties would come at Ukraine's expense.

Poroshenko said he had spoken with Trump about "the question of Russian aggression and the illegal annexation of Crimea."

Donald Tusk said he focused on the Ukrainian question in his phone call with Trump.

"His reaction was very general, without details but at least promising compared to some announcements during the campaign time," Tusk said.

Monitors from the Organization for Security and Co-operation in Europe (OSCE) have continued to report near daily exchanges between the warring sides in eastern Ukraine. Germany and France have proposed a meeting next week with Russia and Ukraine to quell the violence.

Almost 10,000 people have been killed since the conflict erupted in 2014. The annexation of Crimea by Russia increased tensions between Moscow and the West.

For the second time in a week, Ukrainian officials have been slammed for appointing inexperienced young women to top posts. The new head of Kyiv's "lustration" office just graduated from university. (24.11.2016)