Can NATO strike the right balance of force and diplomatic fortitude to make the Kremlin back off? Aboard the British aircraft carrier HMS Queen Elizabeth, Teri Schultz tees up a key meeting of foreign ministers in Riga. 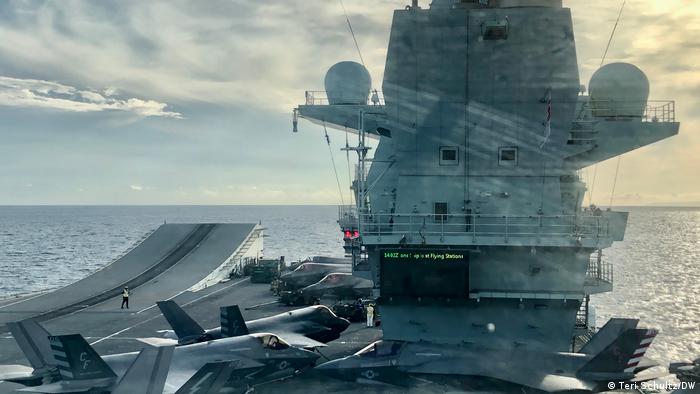 "We're the ones that keep other people awake at night": That's the impact US Marine Corps Brigadier General Simon Doran hopes this massive show of NATO power has on Russian military planners plotting their next moves.

Doran is the senior American representative serving with the UK's Carrier Strike Group 21 (CSG21), the largest fifth-generation carrier air wing in the world. It's on its way back to Portsmouth, England after completing a seven-month voyage of some 40,000 nautical miles to the Indo-Pacific, where along the way forces linked to the deployment took part in strikes against "Islamic State," tracked Chinese submarines and carried out exercises in the Black Sea. And, Doran emphasized, CSG21 is ready for duty anywhere.

"Hopefully we're not only deterring potential adversaries, we're also reassuring all of our partners and allies that if called upon, we will be there," he said. Gesturing around the lower deck of the HMS Queen Elizabeth, the centerpiece of CSG21, he added proudly: "When you have an aircraft carrier that's full of fifth-generation aircraft, surrounded by a ring of steel of highly capable vessels, it's something everybody wants to think about."

The most worrisome "there" for NATO at the moment is likely the Black Sea, where CSG21 engaged in military exercises in June, and where the tide of tension has again risen as Russia reinforces its troop presence on the border with Ukraine after an earlier such boost in March and April.

After that came the Minsk-facilitated — and, many insist, Moscow-backed — flow of migrants over Belarus' borders with NATO allies Latvia, Lithuania and especially Poland. The West has accused Belarusian leader Alexander Lukashenko of using the migrants in an attempt to destabilize the European Union.

Polish President Andrzej Duda has said the Belarus border issue and the Ukraine buildup cannot be seen separately. Duda visited NATO headquarters last week to ask for "strengthening of the air policing mission…strengthening of observation, surveillance and strengthening of the readiness of NATO units along the eastern flank of the alliance." 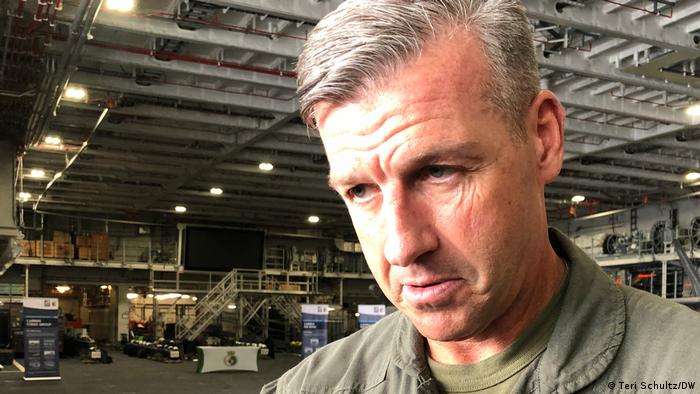 So the stakes are particularly high for the meeting of NATO foreign ministers starting on Tuesday, coincidentally taking place in Riga, Latvia. Speaking to the press on Saturday, NATO Secretary-General Jens Stoltenberg pointed out it was "the second time this year that Russia has amassed large and unusual concentrations of forces in the region…heavy capabilities like tanks, artillery, armored units, drones and electronic warfare systems as well as combat-ready troops."

NATO warns of 'consequences' — but what comes next?

Stoltenberg said the move is "unprovoked and unexplained. It raises tensions and it risks miscalculations." He also warned that "any use of force against Ukraine will have consequences [and] costs for Russia."

NATO is grappling with how to avoid such miscalculations, while making the costs appear high enough to get the Kremlin to back off. "All options are on the table and it's now for the alliance to decide what are the next moves that NATO wants to take," Karen Donfried, the US assistant secretary of state for European and Eurasian affairs, told reporters on Friday. "There is ally cohesion around this support for Ukraine, that it is not acceptable for Russia to continue to potentially use military action against Ukraine."

However, it's not so simple as choosing an option or two from what Donfried calls NATO's "toolkit," due to what one senior US official described as the "classic quandary in the deterrence game."

"At one level, if we say there clearly would be consequences if Russia took an action like this, you want to have some clarity about what those consequences are," explained the official, who was authorized to speak on the matter but not be quoted by name.

On the other hand, he added, "[y]ou don't necessarily want pin yourself down or end up in a situation where you may somehow contribute to a dynamic that wouldn't necessarily lead in the direction that you would want to go in. And so it's a question of finding the right signals and the right deterrent posture that in fact leads to a de-escalation rather than an escalation."

NATO diplomats tend to portray as a "success" the alliance's deterrence strategy in the spring, after which Moscow's buildup de-escalated without incident. Yet just months later, they're back, and this time reportedly installing field hospitals as well, seen as a signal that conflict is anticipated.

Lauren Speranza, an expert on trans-Atlantic defense and security at the Center for European Policy Analysis (CEPA), said NATO could have done more to prevent this situation, having fallen short in the strength of its dissuasion and in imposing sufficient costs on Russian President Vladimir Putin.

"Russia's 'hybrid campaigns' are widespread and ongoing across the alliance," Speranza told DW. "Reacting [mildly] to individual incidents is not enough." 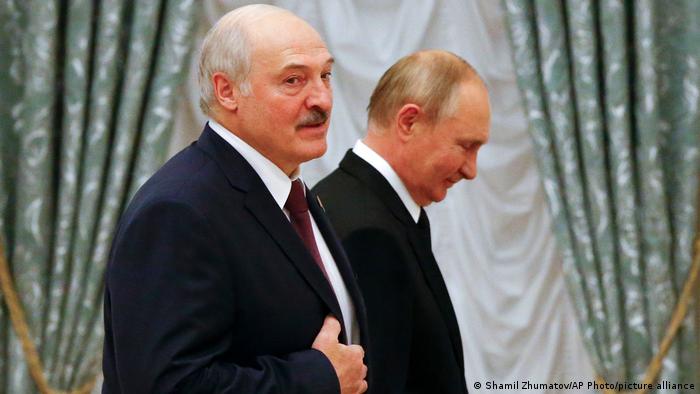 In addition to reinforcing allies' resilience to hybrid attacks, Speranza said the alliance should work with the European Union to "explore more coordinated, proportionate countermeasures to punish Moscow.

"This could include carefully calibrated offensive cyber maneuvers, diplomatic expulsions and seizure or freezing of Russian state assets that Putin would not expect allies to undertake in a cohesive, politically unified way," she said, "and might encourage him to reshape his calculus."

Putin 'needs to be isolated': analyst

Unless and until Putin changes, Russia analyst Olga Lautman insists NATO and allied governments should quit flattering the Russian president and treating him like a partner in dialogue.

"The West paints Putin as this grand strategist — he's not," she told DW. She said, for example, that Stoltenberg should not be calling for meetings of the NATO-Russia Council until these aggressive actions stop.

"Right now, [Putin] is testing to see how serious we are," she explained. "I honestly do worry that he'll invade Ukraine in the next coming weeks but at the same time, he's also testing how far he can go before he gets some kind of compromises or another summit…he just needs to be isolated."

In the meantime, troops aboard the HMS Queen Elizabeth will continue sending more traditional messages to the Kremlin. "The fact that the aircraft carrier has come through the Black Sea and is demonstrating its ability has proved that defense of the EuroAtlantic area is absolutely front and center for NATO," General Tim Radford, NATO's deputy supreme allied commander in Europe, said last week aboard the ship. "There is continuous vigilance around the area and the whole EuroAtlantic area, whether that be in the north or the south or in the Black Sea region."