During her last official visit to Poland, the German chancellor decried Belarus for conducting "hybrid attacks" against its EU neighbors. 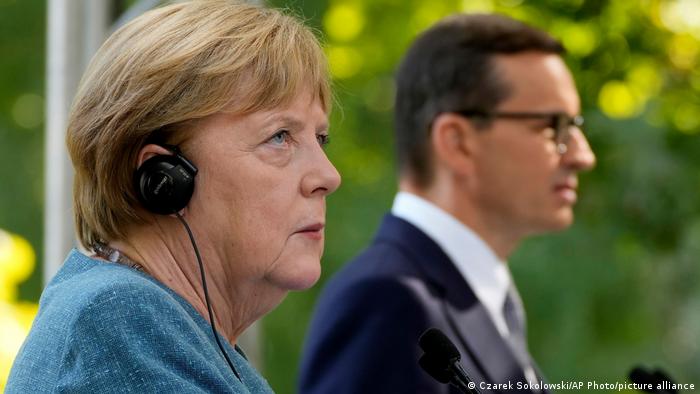 German Chancellor Angela Merkel on Saturday called on Belarus to offer humanitarian help to migrants trapped on the country's border with Poland.

During her last official visit to Poland as chancellor, she said it was "completely unacceptable" that Minsk was illegally pushing migrants over the border into European Union territory.

Merkel backed her Polish and EU counterparts in describing the tactic by Belarus as "hybrid attacks."

Poland, Lithuania and Latvia have accused Minsk of trying to destabilize their countries by flying in refugees from Iraq, Afghanistan and Syria and then pushing them over their shared borders.

Security was high on the agenda during her talks with Polish Prime Minister Mateusz Morawiecki, on the 20th anniversary of the 9/11 attacks and following the Taliban's recapture of Afghanistan.

Merkel also sought to soothe fears over the Nord Stream 2 gas pipeline, which operator Gazprom said Friday had been completed.

Warsaw is concerned the Baltic Sea pipeline will increase Europe's dependence on Russian gas and could be used by Moscow to exert pressure. 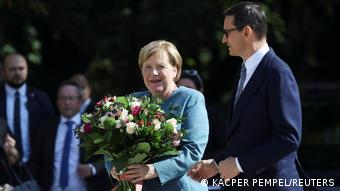 Nord Stream 2 could also be used to bypass Ukraine, which currently relies heavily on fees paid by Moscow for gas to transit the country.

"I made clear that it is our concern that Ukraine will remain a transit land for Russian gas," Merkel said during the joint media conference with Morawiecki.

Poland-EU justice row must be solved by dialogue

Merkel also urged dialogue to resolve the dispute between the European Commission and Poland over the country's reforms to the judicial system.

"Politics is more than just going to court," Merkel said, adding that talks may already be taking place, but if not, Germany would back this as an approach.

No talks with Duda

The chancellor was originally set to meet with President Andrzej Duda. However, Merkel's spokesman said on Friday that Polish officials had cited "scheduling problems," and that the meeting would not now take place.

Duda was instead due to visit the southern Polish city of Katowice to mark the anniversary of the anti-communist trade union, Solidarity.

The change of schedule took place immediately after Russia announced that Nord Stream 2, a pipeline that will carry natural gas from Russia to Germany, had been completed.

Merkel has visited Germany's neighbor more than two dozen times since coming to power in 2005.

The Polish border is set to go into a 30-day state of emergency to further prevent refugees and migrants from entering the country. The EU has accused Belarus of intentionally sending migrants across the border.

For over three weeks, 32 Afghans have been stranded at the frontier between Poland and Belarus. The Polish government has now declared a state of emergency. Activists and opposition politicians say this is absurd.