EU and US accuse Belarus of 'hybrid attack' at borders

"It is important that Lukashenko understands that [the regime's] behavior comes with a price," the EU's Ursula von der Leyen said following talks with US President Joe Biden in Washington. 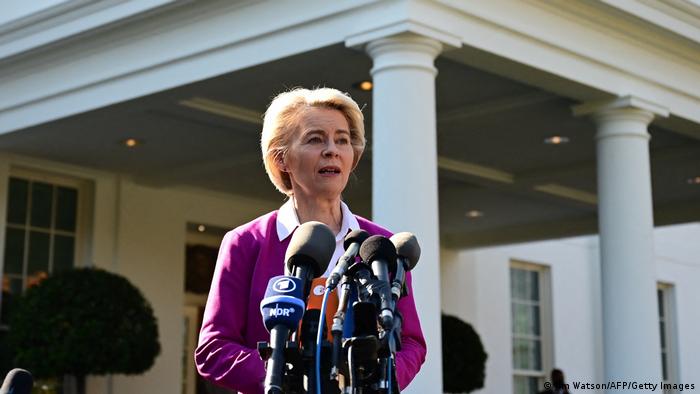 The European Union is preparing to levy fresh sanctions against Belarus over the regime's move to send thousands of migrants to the bloc's borders, European Commission President Ursula von der Leyen said on Wednesday.

The remarks came following talks with US President Joe Biden at the White House, with Washington and Brussels seeking to align themselves on issues ranging from trans-Atlantic trade to growing tensions in eastern Europe.

What was said about Belarus?

Regarding the migrant crisis on the Belarus-EU border, von der Leyen said she and Biden agreed to look into potential sanctions on airlines that facilitate human trafficking to Belarus.

"At the beginning of next week, there will be a widening of the sanctions," von der Leyen told reporters at the White House.

Both she and Biden "absolutely shared the same assessment" that Belarus leader Alexander Lukashenko had launched a "hybrid attack" against EU democracies.

"It is important that Lukashenko understands that [the regime's] behavior comes with a price," von der Leyen said.

Von der Leyen and Biden were slated to discuss a host of issues, with global warming and trade also topping the list.

Biden was keen to stress a message of unity with the EU.

"President Biden will reaffirm his support for the European Union as a fundamental partner for the United States," White House spokesperson Emily Horne said in a statement ahead of the leaders' talks.

Brussels and Washington are looking to kick off the new US-EU Trade and Technology Council to agree "rules of the road" concerning economic issues. US and EU officials will also discuss how to achieve new targets aimed at curbing the effects of climate change.

The meeting on Wednesday seeks to build on talks during the G20 summit in Rome, as well as at the UN climate conference, COP26, in Glasgow.

The ongoing conflict in Ukraine as well as growing tensions in Western Balkans are also on the agenda. In recent weeks, fears had been growing of a potential new conflict in Bosnia after the country's ethnic Serb leader made several secessionist threats.

Later on Wednesday, von der Leyen is set to receive a leadership award from a US think tank, the Atlantic Council, honoring her as a "true European and trans-Atlantic citizen."

What's the status of US-EU relations?

Biden has been keen to get relations between Washington and Brussels back on the right track, after former President Donald Trump repeatedly slighted European allies.

Relations have somewhat improved under Biden, who has helped broker a settlement to two major trade disputes concerning aircraft manufacturers and steel production. The tone of rhetoric has also improved, with leaders emphasizing friendship between the 27-member bloc and Washington.

Still, the road has not been entirely smooth.

The chaotic pullout of international troops from Afghanistan, and the country's subsequent fall to the Taliban, created tensions for the United States with European allies who had contributed to the NATO mission there.

Furthermore, a new defense deal between the US, the UK and Australia ended up nudging out contracts for French submarines — leaving France incensed with Washington and Canberra.

COP26: US and EU unveil plan to slash methane emissions by 2030

European Commission Chief Ursula von der Leyen has said a global methane reduction pledge sponsored by the EU and the US will "immediately slow down climate change." Over 80 countries have signed on to the pledge.