Managing wolves in Germany: A toothy job for tough ladies | Environment | All topics from climate change to conservation | DW | 27.10.2017

Managing wolves in Germany: A toothy job for tough ladies

The wolf commissioner for the German state of Brandenburg and the director of a wolf sanctuary in Saarland, each in her own way, work to reconcile Homo sapiens and Canis lupus. 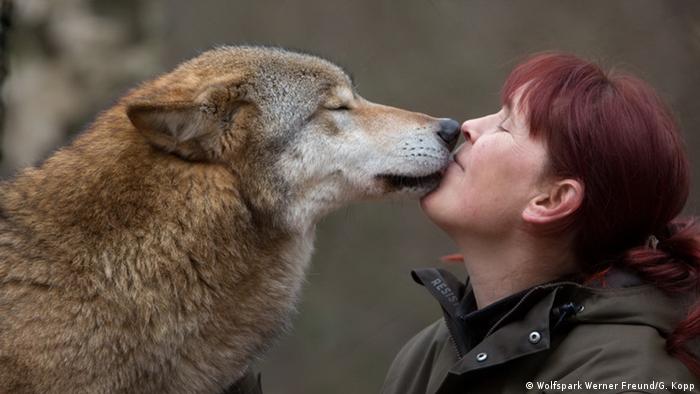 Armed solely with a logbook, a folding ruler and an electric fence tester, Valeska de Pellegrini is ready to deal with wolves. Or to be more exact: to deal with farmers who are concerned about their livestock being threatened by wolves that, in turn, are endangered by various human factors — a complex cycle of causes and effects.

De Pellegrini is a wolf commissioner for the German state of Brandenburg. As she braces herself for her daily routine, some 700 kilometers (430 miles) to the southwest, in the state of Saarland, Tatjana Schneider, a director of the Werner Freund wolf sanctuary, is getting ready to greet "her" packs: Canadian timber wolves, their Mongolian and Swedish cousins as well as the Arctic "gang."

For both women, who have grown to love their "toothy" jobs, another day is about to begin.

- Germans divided over return of the wolves 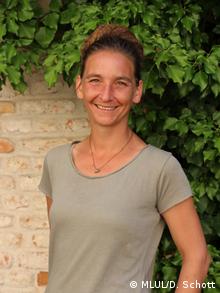 Selected from around 100 candidates

De Pellegrini, a 39-year-old Munich-born researcher, was hand-picked from around 100 applicants to fill the position of wolf commissioner after a nationwide selection procedure run by the Federal Ministry of Food and Agriculture earlier this year.

Biology and behavioral patterns of wolves, conflict mitigation, forestry and forest management — these are just a few areas where she had to demonstrate her competence.

"My task was to write a press release. Some sheep were found dead, and the officials presumed that wolves were involved in the killing," de Pellegrini told DW. "During the oral part, we had to present the case in the round."

In June, de Pellegrini took on her new responsibilities that require her to provide consultations to a wide array of "interest groups," including shepherds and farmers, who often see predators as a threat for their cattle. 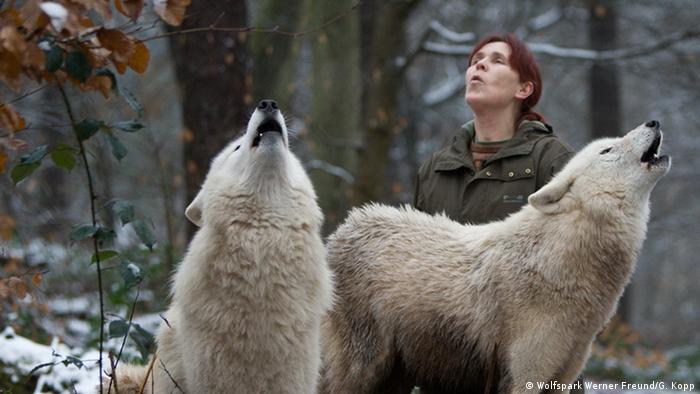 Schneider often howls in unison with the two Arctic wolves, Inuit and Vilks

'Mother' to more than 30 wolves

The problem of peaceful coexistence of Homo sapiens and Canis lupus lycaon (also known as the timber wolf) is something that has occupied 49-year-old Tatjana Schneider from Brunsbüttel, Germany, for the better part of her life.

In 1993, she started working as a volunteer at the Werner Freund Wolfspark, an animal sanctuary in western Germany, where by the end of the 19th century wild wolves had been completely eradicated.

Having accomplished her first task, "to help treat an injured Arctic male with quite impressive teeth," she was soon after asked to support the team and became a longtime assistant to researcher Werner Freund.

With the death of Freund, who was often labeled in the media as Germany’s "wolf man," she took over as park director in 2014 and is now adamant that she will find her own way of getting on with its lupine inhabitants. 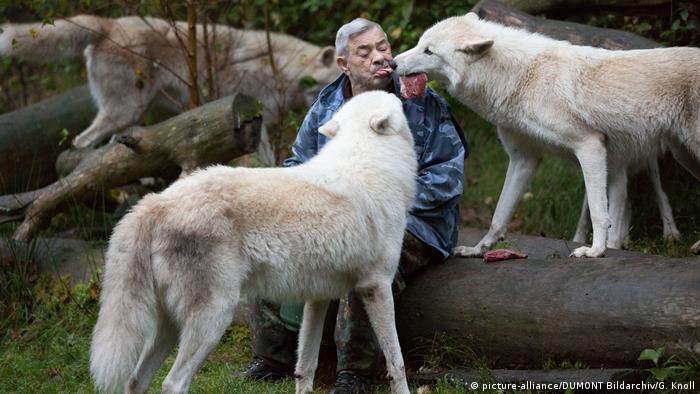 Werner Freund was known for biting into pieces of raw meat, behaving as the alpha male of the pack

"Every wolf is an individual; each has its own character," said Schneider. Even though her life path has been crossed by many packs — over 18 years, she has raised 38 wolf cubs — memories of some of those meetings never seem to fade.

One such memory is her first encounter with a wolf out in the wild, a moment as serene and raw as the air in the Canadian Rockies where it occurred, on a quiet spot on the bank of a frozen lake, peaceful and pristine in the pearly hours of early morning.

The wolf was black, about 3 years old — not a youngster, rather an adult, and all alone. For a minute or so he was trying to break the ice with his paws. Then, a crack in the silence — he dived right in, half of his body disappearing beneath the ice.

"He was busy fishing and looked at me only once," Schneider recalled. 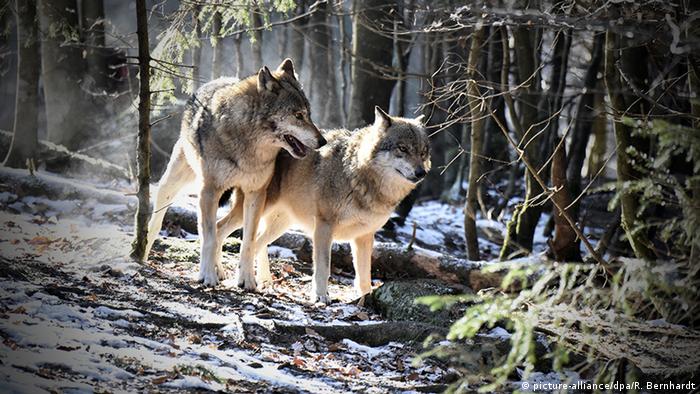 Timber wolves are very temperamental, according to Schneider

For Valeska de Pellegrini, the Colbitz-Letzlinger Heath in central Germany was where she first had the chance to establish direct eye contact with a wolf. "It was really intense," she admitted.

When walking across the heath with her dogs, she suddenly spotted two animals, no more than 100 meters (about 300 feet) away.

"We must have been equally surprised to see each other," she said. "The female was the first to steal away, the male stayed for a while and kept watch. Then he too was gone."

How a wolf ticks

De Pellegrini and Schneider are both driven by a quest to help people better understand how this animal ticks.

"When searching for food, they are very efficient with their energy and try to find a relatively easy way to catch their prey," said de Pellegrini. A stack of hay bales close to a sheep pen, for example, may give the predator a chance to jump in, she added.

On her trips across Brandenburg, the wolf commissioner gladly shares her knowledge on a wide range of topics: from the statutory ban on wolf slaughter and compensation payouts for killed livestock, to protective measures against carnivores and the use of a voltmeter for regular checks on electric fencing. When talking to farmers, she is always quick to warn: "Wolves can usually perceive that the fence is disabled, even from a distance." 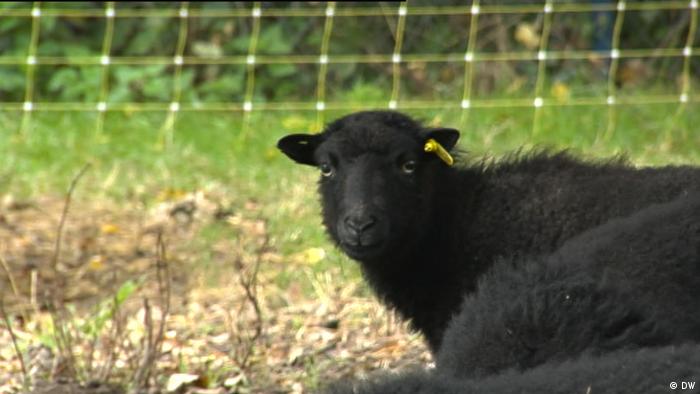 As the day goes by at the Werner Freund wolf sanctuary, the time comes for dinner. The lupine diet varies from raw chicken and calf meat to rabbit and deer. "No worries, we are not on their menu," laughed Schneider, entering the enclosure. The Arctic pair, Inuit and Vilks, greet her with a lick on the face, a sign of acceptance.

In regular contact with the wolves, Schneider draws a great deal of her conclusions about their behavior from direct observation. Her daily routine includes howling with wolves, treating their wounds, supplying their food and even sketching them.

"The timber wolves from North America and Canada are very temperamental," she explained. They are path-breakers, always inspired "by something out there that is bigger."

"The Europeans are shy. They would be very careful in new situations," she said. "As for the Arctic wolves, they also have some shyness in their character, but are usually more open than the European ones."

Neither angels, nor demons

Whatever the character or subspecies, no other animal throughout history has provoked more polarized emotions than the wolf.

"People are quick to stamp these predators as 'problem animals,' although the problem is in our heads," said Nicola Gölzner of the Wolf Center educational center in Lower Saxony. Cases when a wolf approaches humans and is no longer shy or timid in its behavior are "extremely rare," she told DW. Another rare scenario is when a wolf only specializes in killing livestock.

When asked about the concept of "a big bad wolf," de Pellegrini also brushed it off: "As one of my colleagues says, in Germany each year around three people die by cats, simply because scratches from their feline pets get infected." On the other hand, since the return of the wolves, there have been no reported cases of death or injury to humans, she said.

"One should neither idolize nor demonize these animals," Schneider said. "It is simply a predator which has the right to enjoy its space on Earth and to live its life."

The wolf management authority wants to put down six wolf-labrador dogs, sparking an outcry from puppy lovers. The hybrids threaten the genetic future of the resurgent wolf population. (23.10.2017)

A safari in the Bavarian Forest

The mountainous regions of southern Germany are an idyllic place to ski in winter. But few realize that the Bavarian Forest National Park is also home to some large and intriguing animals. (31.01.2012)