Rolf Kluenter is a German artist whose works have been very much influenced by Asia. He was born in 1956 near Cologne and studied at the Düsseldorf art academy. In 1988, he went to Nepal, where he later taught art at the Tribhuvan University in Kathmandu. That's when his own creative work began. He has been living and working in Shanghai since 1999. 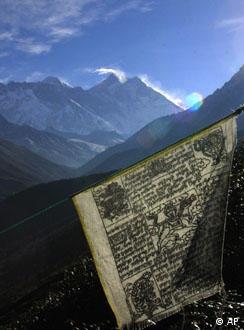 Ralf Kluenter's work has been influenced by traditional Nepalese crafts

Rolf Kluenter’s studio is located in a trendy part of Shanghai where there are many galleries. The influence of Shanghai and Nepal on his work is immediately perceivable -- just from the way his works are arranged around the room. Unfinished pieces have been laid out on one side of the studio. Whereas works completed in Nepal have been displayed on the other side.

Kluenter says he was especially inspired by the traditional Nepalese method of producing paper: "The paper is produced from the bark of the daphne shrub which grows in the Himalayas. In Nepal -- and Tibet -- paper has been produced like this for millennia. Once the bark is processed, small sheets of manuscripts are made from the material. The sheets are used for writing religious scripts. There are also black manuscripts, invented in the 11 century, on which one writes using gold or silver. Then they have an inner meaning -- they are sutras, precious texts, which take on a different meaning when deposited in a shrine."

Kluenter learnt how to make this hand-made paper. He then cut the sheet into small shreds or strips, rearranged them and stuck them back together. The material then acquired a new texture. Sometimes a patch remained free, which allows the viewer to see the picture behind. The artist also learnt how to dye the paper mixture by using coal, allowing him to make further use of it.

"I also folded paper a lot there, I discovered the old Nepalese paper-folding tradition, and gave it a new form," explained Kluenter. "The paper thus gets a new material presence."

From Nepal to Shanghai

He first visited Shanghai when he was organising an exhibition of his own works. He then decided to move there. The new environment introduced him to new themes and changed his style.

At the moment, he is painting on canvas, and also making videos and installations. The city and its many facets are visible in his work once again. In one installation for a Shanghai gallery, he partially covered the windows with sheets of transparent film which he had previously printed.

He explained that the black fields represented the "Jewish quarter, which is densely populated, because of the flight of Jews from Germany."

"Under them are a wall and a walled-up window, which serve as a background to this map. On top of the map is a tilted face which shows the biometric points. I have put these three levels on top of one another -- it reminds me of the time after the Second World War, the walled-up wall, isolation, biometrics, and recognition."

Kluenter likes to explore Shanghai's hidden layers. But he has not forgotten or discarded his experiences from Nepal . When invited to the Shanghai Biennale last year, he suddenly became fascinated with the situation in Nepal:

"This project is called ‘Beyond My Chair’. From those paper nets, I made a huge chair which was 4.2 metres long and 2 by 2 metres wide, and was overturned. A Nepalese woman sat next to it and did a performance. Every two hours, she would stand up and turn over the chair -- the role of women, maintenance, the chair and what will happen with it... And in the background a film about a woman in the Himalayas was running -- she was sitting in her mud hut doing needlework."

"‘Beyond My Chair’ also addressed the situation in Nepal because the king has been overthrown over the last year, losing all his power. I also addressed the old Nepalese custom, according to which everything happens on the floor, people sit on mats, there is a connection with the earth. That was very well-received here in China."

Kluenter now has studios in Shanghai and Kathmandu, as well as in Zülpich, Germany. He sometimes flies back to Nepal before starting work on important pieces. He can't quite give up his past.

The museum is closed to the public, but the spy agency revealed some declassified artifacts in time for the agency's 75th anniversary.

Canadian Prime Minister Justin Trudeau spoke of "significant damage" in eastern Canada as he ordered the military to help with clean-up operations.