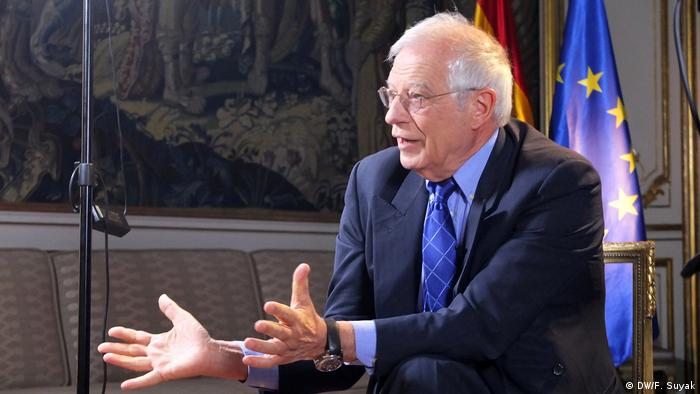 Spain's Josep Borrell has come a remarkably long way since growing up as the son of a baker in the Catalan Pyrenees village of La Pobla de Segur.

If approved by the European Parliament, he will take up a five-year term as High Representative of the Union for Foreign Affairs and Security Policy, and of Vice-President of the European Commission, becoming the chief diplomat for 500 million Europeans.

Borrell earned several degrees in aeronautical engineering, mathematics and a PhD in economics, before coming a professor in Spain and eventually entering politics in 1975 with the Socialist Party as the country transitioned to democracy following the death of dictator Francisco Franco.

Spain's foreign minister since 2018, the 72-year-old has held some of the top positions in Spain and Europe spanning a four-decade career. He entered government in 1982, serving successively as secretary for budgets, treasury and minister of public works under Prime Minister Felipe Gonzalez until Socialist rule ended in 1996.

"I have devoted a significant part of my life, my work, and my political activities to European issues, which have always taken a central place in my interests and commitment," Borrell wrote in his CV, which he was required to give to the European Parliament ahead of a confirmation hearing on October 7.

Turning Europe into a diplomatic heavyweight

The EU has set out developing a more efficient and robust foreign policy apparatus as a priority in a multi-polar world dominated by the United States and EU on one hand, and China and Russia on the other.

In her mission letter to Borrell, President-elect of the European Commission Ursula Von der Leyen tasked him with making the EU "more strategic, more assertive and more united in its approach to external relations. You should seek to strengthen the Union's capacity to act autonomously and promote its values and interests around the world."

It will be a difficult task as EU member states often jealously guard their sovereignty and conduct of foreign affairs, and other European commissioners stake out rival positions. There are also differences between Germany and France, and between Central and Eastern European countries and the rest of the bloc.

"Borrell is a tough and demanding negotiator who is always open to challenge the status quo," a Spanish diplomat who requested anonymity told DW. "He also has a huge working capacity and determination driven by a strong sense of purpose."

Jose Torreblanca, the head of the Madrid office of the European Council on Foreign Relations, said Borrell's first task would be to make the foreign policy chief position work again and to gain the appreciation and trust of member states.

"The general feeling is that the European foreign policy chief has been shut off from the main policy dossiers," including Russia, Ukraine, conflict in Libya, migration, Syria and transatlantic relations.

Similar to outgoing foreign policy chief Federica Mogherini, Borrell will have little luxury in choosing the next crisis to emerge on the international stage. He will be entering office with instability in the Middle East and North Africa, migration from Africa, conflict in Ukraine, Russian ambitions, Balkan integration, tensions with Iran and "systemic rival" China high on the agenda. As a Spaniard, he may play a special role in crafting EU foreign policy towards Venezuela.

Then there is the United States under President Donald Trump's combative "America First" foreign policy, which has driven a chasm between historic transatlantic relations.

Last year, he said that the US threats under Trump to militarily intervene in Venezuela sounded like some sort of "cowboy diplomacy."

Borrell is not without baggage and controversy, not the least because of his strong opinions and direct, some would say undiplomatic style. In a heated interview with Deutsche Welle earlier this year, he walked off the set after becoming irritated at questions over Catalonia. Borrell hails from the region and is a proud Catalan, but is a staunch opponent of the Catalan secessionist movement — a flashpoint in Spanish politics.

There are also questions over his finances and conflicts of interest. He was forced to resign from the European University Institute in 2012 for failing to disclose earnings as a board member of sustainable energy company Abengoa. Last year, Spain's market watchdog fined him for insider trading after selling shares in the group in 2015 shortly before it announced it was on the verge of bankruptcy.

A previous financial scandal in 1999 forced him to resign as Spain's Socialist Party leader and prime minister candidate, although he was never directly accused of fraud while in the finance ministry.

From the EU to Trump: Where does Ursula von der Leyen stand?

Germany's defense minister has been at Angela Merkel's side since 2005. No stranger to global affairs, she's set to become the next European Commission president. So how does she view Europe's most pressing challenges? (04.07.2019)

A transatlantic trade war is taking shape. But one thing is clear: Donald Trump won't rest until he gets his way. His opponents will have to join together — yet that doesn't seem likely, says Henrik Böhme. (01.06.2018)

Germany's relationship with the US used to be a close friendship, but under President Trump, it feels like anything but. Foreign Minister Heiko Maas is arguing for a "balanced partnership" as counterweight to the US. (24.08.2018)

News of a potential breakthrough to end the ongoing conflict in eastern Ukraine has been greeted as a positive step in Moscow and Berlin. Opposition in Kyiv, however, called it capitulation. (03.10.2019)