Shinzo Abe is the first Japanese prime minister to visit Iran in over four decades. The trip comes amid escalating tensions in the Persian Gulf, as the US tries to cut off Iran from its main oil customers. 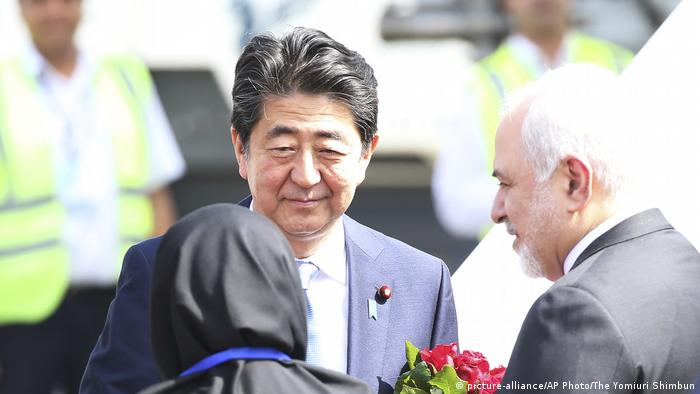 Japanese Prime Minister Shinzo Abe has arrived in Iran for a two-day diplomatic mission aimed at cooling rising tensions between Washington and Tehran.

"Amid concerns over growing tension in the Middle East, and with the attention of the international community on the issue, Japan wishes to do its best toward peace and stability in the region," Abe told reporters in Tokyo before leaving for Tehran.

Abe's trip is the first by a Japanese premier since Iran's Islamic Revolution four decades ago. The last Japanese prime minister to visit Iran was Takeo Fukuda in 1978. In Tehran, Abe is scheduled to hold talks with Iranian President Hassan Rouhani, Supreme Leader Ayatollah Ali Khamenei and other senior leaders of the Islamic Republic.

Abe's Iran trip comes at a time when Tehran finds itself increasingly boxed in by intensifying US sanctions, which will likely cut the Middle Eastern nation off from its main oil customers.

US President Donald Trump's administration has taken an increasingly hawkish stance against Tehran, with Washington recently dispatching an aircraft carrier strike group and bombers to the Persian Gulf, among other measures.

During Trump's state visit to Tokyo at the end of May, the US president did not oppose Abe's plan to travel to Iran. Both Abe and Trump also discussed Iran over phone on Tuesday. "The two leaders exchanged views on regional issues, including the situation in Iran," Japan's chief cabinet secretary, Yoshihide Suga, told reporters.

"Abe is in Tehran with Trump's blessing, and he has access to the highest level of Iranian leadership," Shihoko Goto, senior Northeast Asia associate at the Wilson Center in Washington, told DW.

"Abe's visit to Tehran represents a new development for Japan on the global stage," she said. "Abe is eager to play the role of honest broker, especially ahead of Japan's Upper House election next month. It would catapult Japan into a role that it has not played in the past, as it seeks to encourage dialogue between two sides now seemingly at a deadlock."

While Abe's visit is seen by some as an effort to mediate between the US and Iran, some experts remain skeptical about the potential for any breakthrough.

"I do not believe that Shinzo Abe's trip to Iran can change 40 years of enmity between Iran and the US. Like the German foreign minister this week, he will return to Japan unsuccessfully and empty handed," a Tehran-based Iranian political analyst, Sadegh Zibakalam, told DW.

This view is shared by Stephan Nagy, a professor of international relations at Tokyo's International Christian University. Japan's friendly relations with both Tehran and Washington put Tokyo in a good position to facilitate dialogue, albeit with limitations, he told DW.

Nagy said that Japan was not in a position to "bridge the massive security divide between Iran and the US." Moreover, the expert added, "Japan is allergic to the idea of nuclear weapons," and Iran's nuclear ambition limits the scope of what Japan would be willing to accept diplomatically.

The Iran trip will put Abe's diplomatic skills to the test, as Tokyo has limited room for maneuver to engage in an independent foreign policy vis-a-vis Tehran. Japan relies on the US for its security and for Abe, maintaining Tokyo's security relationship with Washington is top priority.

"Japan cannot afford to have friction with the US simply because of the threat that is posed by North Korea and, more importantly and over the longer term, China," Jun Okumura, an international relations analyst with the Meiji Institute for Global Affairs, told DW last July, after Abe canceled a planned trip to Iran.

Iran is currently locked in a bitter standoff with Washington. Last year, Trump withdrew the US from the landmark nuclear deal that Iran and six world powers struck in 2015.

Washington has since reimposed crippling unilateral sanctions, aimed at putting an end to Iran's oil exports and inflicting economic pain as part of the US' "maximum pressure" campaign.

The Trump administration's moves have elicited a strong backlash from Tehran, prompting it to suspend some of its commitments under the deal. In May, Iran said it would keep more enriched uranium than allowed under the nuclear accord, and set a 60-day deadline to negotiate new terms.

Japan was one of the top consumers of Iranian oil but the country has now stopped buying due to US sanctions. A country with no known reserves of fossil fuels, Japan is heavily dependent on imports of oil and gas, particularly from the Middle East.

Nagy said that Japan's relations in the past were based on "energy diplomacy," which the US tolerated because Japan does not have its own fossil fuel reserves. According to Japanese government data, Iranian oil comprised 5% of Japan's total supply before tighter US sanctions were introduced.

Japan clearly has a stake in ensuring stability in the Middle East, not least in accessing energy supplies from Iran, said Goto. "Still, the challenge is whether Abe can fulfill the role of honest broker not only by being the go-between of the two sides, but also by continuing to push for continuous engagement at the working level as well."

Iran remains within the limits set by the 2015 nuclear deal with major powers, the IAEA has said. The accord has unraveled after the US withdrew from the deal, sanctioned Iran and sent more troops to the Middle East. (31.05.2019)