German Foreign Minister Heiko Maas' Iran trip made clear that Europe's role in the Middle East is little more than that of a well-meaning extra. Yet these diplomatic efforts are still important, says Matthias von Hein. 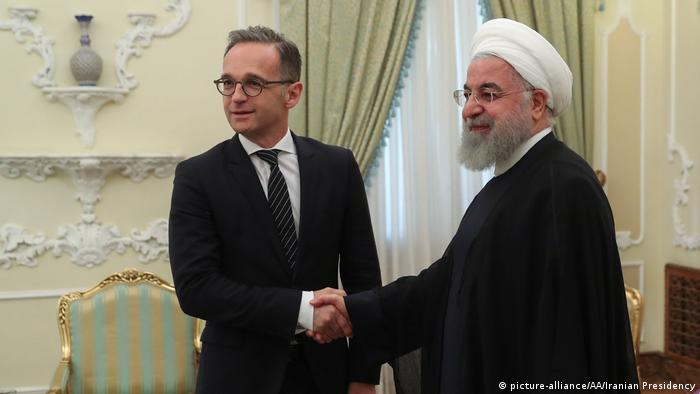 Germany's foreign minister went to Tehran empty-handed, and empty-handed he returned. There was no "miracle of Tehran": The nuclear agreement was not saved, nor did the region suddenly change course for one of de-escalation. In any case, no one should have had any great expectations of this "journey to the crisis zone," as Maas' spokesperson described it. The party actually responsible for the escalation in the Gulf — the United States — wasn't at the table for the discussions.

Washington's campaign of "maximum pressure" is, as intended, strangling Iran's economy. Oil exports have collapsed, there's galloping inflation, the currency is in free fall. The pressure is also mounting in Iranian domestic politics. The result: Iran is nearly at the end of the "strategic patience" it has been practicing so far. Tehran is asking for concrete help in opposing the US sanctions — or, better still, their suspension. Otherwise, it has threatened that, beginning on July 7, it will start to carry out controlled violations of its obligations under the nuclear agreement, particularly concerning the enrichment of uranium beyond the permitted threshold.

Europeans have nothing to offer Tehran

But Germany's top diplomat couldn't do any more than point to the European trade exchange channel INSTEX as a way of circumventing American financial sanctions. So far, though, not a single transaction has been made via INSTEX. Europeans support the nuclear agreement, and with good reason. But they cut a helpless figure in trying to keep the agreement alive against the will of the US administration. They can't provide the economic exchange and trade that was promised in return for the controlled renunciation of nuclear weapons. Banks, in particular, and businesses with US investments are too afraid of being targeted by the American financial authorities.

The situation is further complicated by the fact that Washington doesn't seem to be of one mind concerning the aims it is actually pursuing in Iran. Regime change, as national security adviser John Bolton has in mind? Or just a "better deal" from the dealmaker-in-chief, US President Donald Trump? And if the US really is keen to have further talks, as both Trump and his secretary of state, Mike Pompeo, have said, why is this offer immediately garnished with another tightening of the sanctions screw, as happened last Friday? In any case, the real question is why Tehran should have faith in any new promises that come out of the White House when the United States is already reneging on the previously negotiated agreement.

Read more: Why Germany can't concede too much to Iran

Every channel of communication is important

And yet: With aircraft carriers, soldiers and bomber squadrons already posted to the Gulf, it's a good thing that the diplomats are heading there, too. The situation is extremely dangerous. Neither side wants a war — with the possible exception of perpetual hawk Bolton, but everyone is preparing for and anticipating him. In this situation, misunderstandings can trigger potential disaster. Every channel of communication is invaluable. Especially if Washington and Riyadh are also connected to these channels somewhere down the line — as with Japanese Prime Minister Shinzo Abe's visit to Tehran at Trump's behest, or that of United Arab Emirates Crown Prince Mohammed bin Zayed Al Nahyan to Berlin, both set for Wednesday.

Ultimately, however, there is no escaping the need for direct talks between Tehran and Washington. The whole world has an interest in these talks, and Maas will have made the case for them in Tehran. But Iran is hardly going to sit down at the negotiation table while the sanctions knife is being held to its throat.

German Foreign Minister Heiko Maas has arrived in Iran, looking for "constructive ways" to save the 2015 nuclear deal. DW takes a look at the timing of his visit, the various actors involved and their goals. (10.06.2019)

Australia's Sydney braces for floods amid massive rainfall 1m ago