The winning project provides psychological support to refugees and promotes women's empowerment. It also supports understanding between Jews and Muslims. 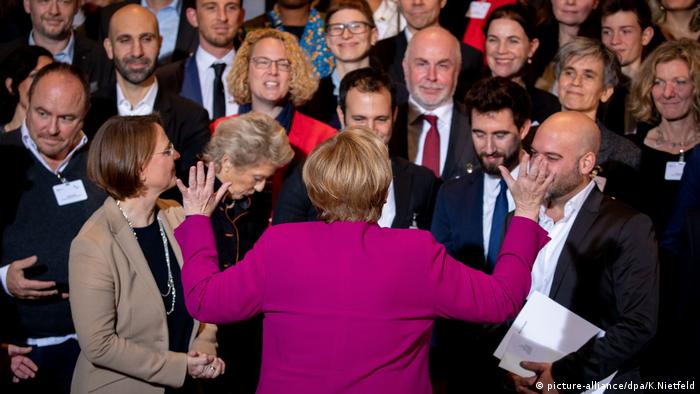 The project "Building Bridges Encountering diversity" (Brückenbau - Vielfalt begegnen) won the annual prize for imparting the values of tolerance, non-discrimination, equal rights and acceptance of different religions in its work with refugees.

The project is run by the Central Welfare Office of the Jews in Germany and the Israeli relief organization IsraAID at 10 migrant reception centers in Berlin and Frankfurt. It receives support from the German government.

Workers in the project are Arabic speaking Israelis, Jewish Israelis as well as Germans, who are also supported by volunteers.

"The mission of integration and imparting values is definitely not always easy. The tone has even become more testy," Merkel said in Berlin.  But she added: "Germany would be much less rich without its citizens who have an immigration background."

She called the project "a really groundbreaking initiative."

The Central Council for Jews in Germany nominated the project, which was then selected by a jury.

Council President Josef Schuster said the project helps to create bridges between religions as well as between refugees and other members of society.

"The prize encourages the continuation of exchanges between Muslims and Jews," he said.

Jewish and Muslim leaders from Germany led a memorial for the victims of the Auschwitz death camp on the 74th anniversary of Nazi deportations from the Litzmannstadt ghetto. The ceremony was part of an educational tour. (09.08.2018)