Despite gloomy headlines about the asylum policy debate, a majority view life with their immigrant and non-immigrant neighbors positively. The study still noted an East-West split, as well as a divide on headscarves. 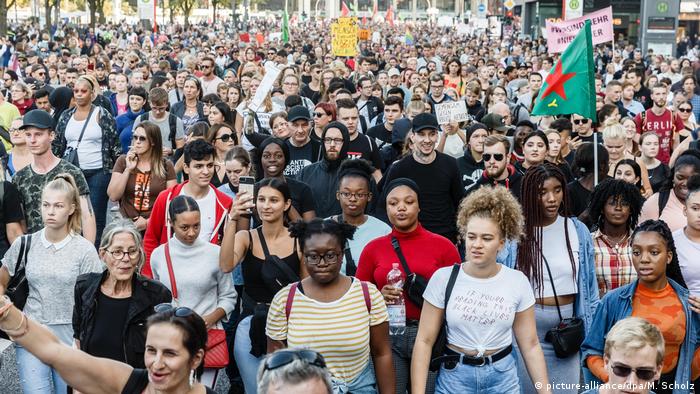 People living in Germany continue to view the country's multicultural society positively, according to a new study published by the Expert Council of German Foundations on Integration and Migration (SVR).

The "Integration Barometer 2018" is the first representative study on the matter to come out since the start of the so-called refugee crisis in 2015, which saw hundreds of thousands of people escaping war and poverty in their home countries enter Europe.

Despite refugees and immigration policy dominating the news and politician's speaking points in Germany, the study found that most people still think that life with their immigrant or non-immigrant neighbors is going well.

Solution to tensions in education

Researchers noted that skepticism about immigrants can be overcome by having more "personal encounters."

"The everyday experiences are significantly better than what the [media] discourse would suggest," researchers wrote in the study.

Germany's integration commissioner, Annette Widmann-Mauz, said the study's results were "a good sign" and that it's important to support schools and other places where people have more opportunities to come into contact with their neighbors. She noted that the attitudes about integration are most positive "wherever there are direct contacts in the neighborhoods, among friends or at work."

Attitudes towards refugees were largely positive from both people with and without immigrant backgrounds in Germany. Around 60 percent of local Germans support continuing to take in refugees, also if Germany were the only country accepting asylum-seekers in the European Union. However, a majority of them also want to curb refugee arrivals.

Around 80 percent of Muslims questioned in the study supported women and girls being allowed to wear headscarves to school. Only 41 percent of Christians, on the other hand, thought that headscarves should be allowed in schools. Local Germans were more open to allowing headscarves in public authorities, with 52 percent backing the idea.

The "Integration Barometer 2018" is a representative study of people with and without immigrant backgrounds in Germany. A total of 9,298 people were surveyed between July 2017 and January 2018.

The results of the latest "Integration Barometer" come after weeks of far-right protests against refugees and immigrants rocked several eastern German cities, including Chemnitz and Köthen. Although topics focusing on migrants and refugees dominate headlines and dictate and within the German government, opinion polls suggest that concerns about pensions, housing, education and infrastructure top the list of issues people are most concerned about in Germany.