Urban redevelopment in Altena in northwest Germany is at the heart of a successful refugee resettlement program. The story resonates on Architecture Day, where the motto is for architecture to "create quality of life." 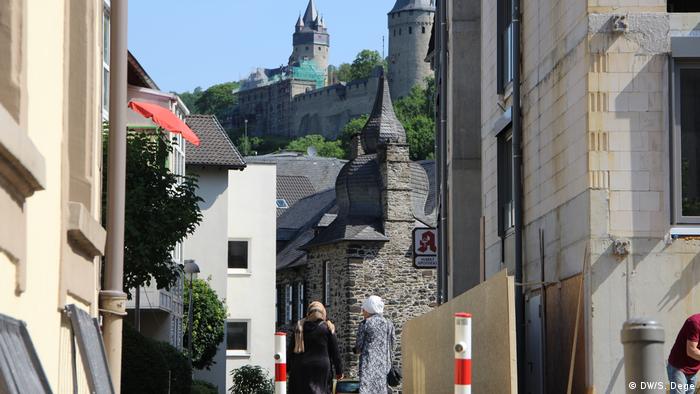 Fahad Al-Azzawi smiles as he puts on the kettle for tea - he has just signed the rental agreement for his first apartment in Germany. Fahad's friends in Dortmund, just 40 kilometers away, all still live in shelters.

Being a refugee, he doesn't take this for granted, he told DW. The 28-year-old is a doctor, and he speaks good German. He once worked in the Iraqi city of Mosul, but fled to Germany because he didn't want to sew up injured IS fighters. He is studying hard for the recognition of his Iraqi diploma: two years after arriving in Germany, he would really like to work again. 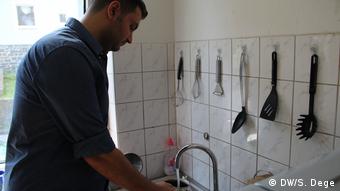 Fahad Al-Azzawi is delighted: his own apartment at long last

Fahad is one of about 400 refugees from Syria, Afghanistan, Iraq and Eritrea who live in Altena.

Just a few years ago, Altena was Germany's "fastest dwindling town." Large enterprises moved away, taking jobs with them.

Businesses closed. Since 1970, one out of three residents has left - leaving behind hundreds of empty apartments.

Then, the town took a bold initiative to stop the downwards spiral: reorganization, reconstruction. 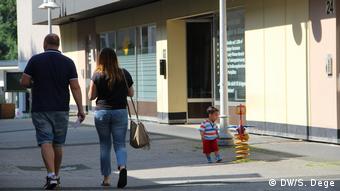 Some spaces are still boarded-up

City planer Lisa Gudra walks through the town with a population of 17,000 people, greeting locals and newcomers alike. On the banks of the river Lenne, a few men are busy helping modify a former bar in a building the town bought with the aim of converting it into a meeting place for refugees. Under the watchful eyes of the German craftsmen, they carry big bags of cement and roll out cables. The plan is to hold language and computer courses here.

The reconstruction work is an example of how Altena decided to approach the refugee isssue. About two years ago, at the height of the refugee crisis in September 2015, the town made headlines when the mayor announced he would be accepting 100 refugees above the number his town was assigned - a sensation.

In another part of town, Joachim Effertz points out a row of neat multi-family residences on Wilhelmstrasse that are owned by a construction company he heads.

People moved here in the 1950s, when the town's iron and steelworks were still flourishing. "Today, 200 of our 1,900 apartments are empty," Effertz said. A few are being torn down - but refugees like Fahad Al-Azzawi live in the others, complete with a copy of the house rules in Arabic hung in the hallway. "We are housing these people in functioning neighborhoods," Effertz said, adding that everything has gone well so far. "I'm particularly impressed by how helpful the locals are," he said. Effertz, too, is pleased to welcome new tenants

One reason why the refugees feel so comfortable in Altena is the level assistance, said mayor Andreas Hollstein, explaining that each refugee family was assigned a local contact person. In addition, the refugees were not accommodated in gyms or containers, but in normal homes. Volunteers also offer German lessons or help with the renovation of apartments.

It's hoped that as many refugees as possible will quickly have paid employment. To this end, the community asked refugees about their qualifications. Hollstein organized job and information exchanges with employers; Effertz spoke with the trade unions.

No wonder that Altena was the first city in Germany to receive the newly created National Integration Prize in May 2017, with mayor Andreas Hollstein standing proudly next to Angela Merkel at the award ceremony.

But in the dreary concrete landscape of Altena, many shops are empty. The disappointment is written in the face of a young woman hurrying to the bus. "There is nothing left in Altena," she complained. "No business, no doctor, no hospital." 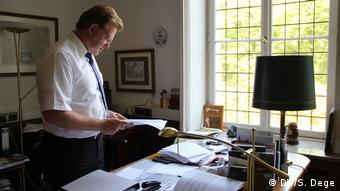 A young woman pushes a two-year-old girl in a pram would be happy to leave. "I am from Altena, but I could just as well move away if I find work elsewhere," she said.

But locals are also happy about the new influx. "I was a refugee myself, and I'm glad about the people who have come to us," said a local pensioner who was originally from the Polish city of Wroclaw.

Altena has also redirected the traffic, the narrow Lenne valley beautified with a pedestrian promenade. A so-called "'infotainment' elevator "today brings visitors up the mountain to the Altena castle, which is perched high above the steep slopes of the Lenne mountains. Hollstein reiterates that urban redevelopment in Altena is far from over. In the same way, integration is "not a sprint but a long-running commitment," he said.

The western German town of Altena has been honored for its contribution towards the integration of immigrants into German society. The prize includes a cash award of 10,000 euros. (17.05.2017)

Merkel: My A-Z on what it means to be German

Amid a fierce debate on the best attributes of German culture, a popular tabloid has printed Chancellor Angela Merkel's A-Z list. But she admitted that there are probably as many answers as there are residents. (22.06.2017)