The western German town of Altena has been honored for its contribution towards the integration of immigrants into German society. The prize includes a cash award of 10,000 euros. 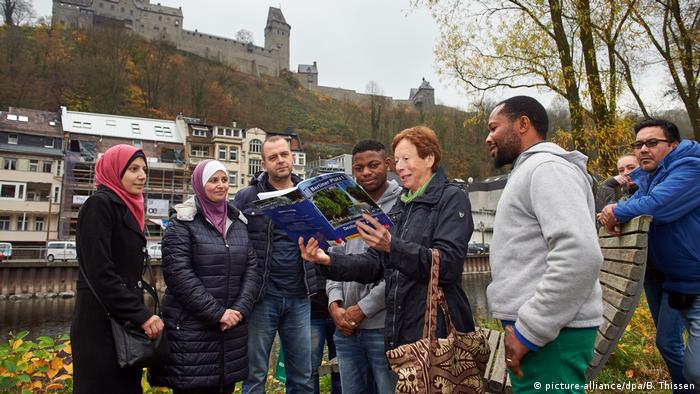 Speaking to the town's representatives while awarding the National Prize for Integration in Berlin on Wednesday, Germany's Chancellor Angela Merkel said that integration was the most successful where people are able to trust each other.

Altena's Mayor Andreas Hollstein thanked Chancellor Merkel for the award and for her policy regarding the refugee crisis.

Justifying their choice for the award, jury members said that the town of Altena was a perfect example of officials and volunteers working with each other to assimilate refugees. The town took in 370 refugees - 100 more than it was supposed to receive.

Several of the town's 17,000 residents had accommodated migrants in their own homes instead of letting them stay in refugee shelters. They also volunteered for teaching the German language and looking after migrant families.

Meanwhile, Altena also profited from the influx. The town had been witnessing a declining population since the last 20 years and numbers have been gradually increasing since 2015.

"The prize shows that particularly small municipalities in North Rhine Westphalia can serve as models for the integration of fleeing people," the head of the union of municipalities, Bernd Jürgen Schneider, told journalists in Düsseldorf. Altena's program, "From refugee to Altena resident" was an example of quick and sustainable assimilation into German society, he added.

The German government decided last year to award the National Prize for Integration to institutions around the country. A jury comprising members of Germany's academic, cultural and political community, under the leadership of the German interior ministry's representative for refugee management, Frank-Jürgen Weise, chose the winner.

The aim of the award was to publicize positive examples of integration into Germany's life and culture, Weise told public broadcaster WDR 5.

A report from the Office for Migration and Refugees has shown a significant decrease in the number of asylum-seekers leaving Germany voluntarily. A new online portal now aims to make returning "the better option." (11.05.2017)

Iraqi refugee shares his success story as an entrepreneur in Germany

Entering the job market in Germany can be difficult for a refugee and often requires special educational qualifications. Could self-employment be the solution? (05.05.2017)