As the US scrambles to reorganize a summit with North Korea, positive outcomes are far from certain. Rather than a calculated strategy, the Trump administration's disorganized diplomacy is leaving the world in suspense. For a period of time in early May, the diplomatic breakthroughs on the Korean Peninsula provided the impression that US President Donald Trump's "maximum pressure" policy was working, and a clear path to negotiation between the US and North Korea seemed possible after a year of "fire and fury" rhetoric and missile tests.

The leaders of North and South Korea held a historic meeting in April and pledged and to officially end the formal state of war between the two countries. After US Secretary of State Mike Pompeo met with North Korean leader Kim Jong-un on May 8, a date was set for an unprecedented summit between Kim and the US president for June 12 in Singapore.

The White House even minted commemorative coins, emblazoned with the word "peace talks" and visages of the two leaders. Trump boasted that "everybody thinks" he should receive a Nobel Peace Prize.

However, only a few weeks later, the meeting between Trump and Kim is no longer a certainty as envoys from all parties scramble to renegotiate after Trump abruptly called off the summit in a letter issued on May 24.

One of Trump's consistent strategies is to keep his opponents off guard by obfuscating his intentions. However, the sensitive and complicated structure of forging diplomacy between the US and North Korea is impaired by mixed signals coming from Trump administration officials and signs of dysfunctional policymaking from the White House. 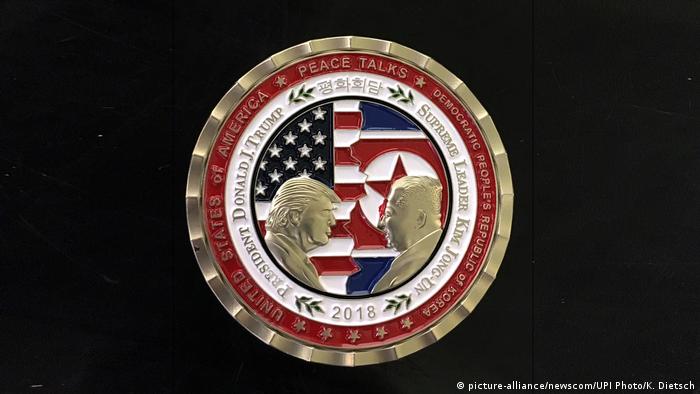 After the summit was cancelled, the White House gift shop announced the coins would be sold at a discount

This was made clear by Pyongyang's reaction to a televised interview with US Vice President Mike Pence on May 21, during which Pence made remarks about the Kim regime meeting a similar fate to Colonel Gaddafi in Libya, who was overthrown and beaten to death in 2011.

"As the president made clear, this will only end like the Libyan model ended if Kim Jong-un doesn't make a deal," Pence told Fox News.

Pence's statements reflect hardliner National Security Advisor John Bolton's remarks in April about the so-called "Libyan model" of denuclearization, which calls for the complete removal of all nuclear weapons material. Pyongyang is very aware of the fact that Gaddafi gave up Libya's pursuit of nuclear weapons in 2003, and was nevertheless overthrown by US-backed forces.

Sieren's China: A war of diplomacy on the Korean peninsula

The remarks from the US vice president came across as antagonistic to the North Koreans at a point where both sides were trying to create a sustainable framework for negotiation. In response, North Korean Vice Minister for Foreign Affairs Choe Son-hui issued a statement published by North Korea's official Korean Central News Agency expressing his "surprise" at "such ignorant and stupid remarks gushing from the mouth of the US vice president."

In the statement, before calling Pence a "political dummy," Choe said that as vice president, Pence should "sense the trends in dialogue and the climate of détente."

"We can also make the US taste an appalling tragedy it has neither experienced nor even imagined up to now," the statement continued.

Trump's letter in response cancelling the summit cited the "open hostility and anger" from North Korea, while boasting about the US' nuclear capability being "massive and powerful." Trump's letter also lamented the "lost opportunity" for the world, but dangled the possibility that talks could continue.

Indeed, after a conciliatory response on May 25 from North Korea's Vice Foreign Minister Kim Kye-gwan, expressing Pyongyang's willingness to talk at "any time and in any format," Trump took an about-face and signaled on Twitter that the summit could very well continue as planned, without making anything official.

"He tries to portray it as negotiation gamesmanship, which in some ways is true," added Fitzpatrick. "His announcement that the summit was off pressured the North Koreans into quickly moving to try to put it back on. But when Trump then contradicted his own staff and said the meeting could still be held on June 12, he displayed his keenness to make it happen."

"By being so enthusiastic about the summit and basking in the false hopes that it will bring him a Nobel Peace prize, Trump cedes leverage to North Korea," said Fitzpatrick.

Giving the advantage to Pyongyang?

Sensing an opportunity to save face, on May 26 Kim quickly organized a meeting on the northern side of the truce village of Panmunjom with South Korean President Moon Jae In, who had been blindsided by Trump's abrupt pullout.

In a show of bonhomie, the two were pictured embracing and Moon returned from the meeting with a message for Washington that Kim was "willing to denuclearize," if the US would respect North Korea's sovereignty.

"Kim has already taken advantage of the situation," Dr. Jung Pak, SK-Korea Foundation Chair in Korea Studies at the Brookings Institution’s Center for East Asia Policy Studies in Washington, told DW. "He met with President Moon in a quickly organized second summit meeting, creating the perception that North and South Korea were working toward peace, while the US gets the blame for obstructing dialogue."

"Moon has been clear that he wants to play the role of mediator between the US and North Korea, in effect 'coaching' Trump and Kim on how to handle each other," said Pak.

"There is concern that improvement of inter-Korean relations without Kim's commitment and actions on denuclearization will defeat the "maximum pressure" campaign (if it hasn't already), while it buys time for Kim to continue developing his WMDs and normalize his claimed status as a nuclear weapons power," said Pak.

Although there is no official certainty, there are signs that both sides are continuing to lay the groundwork for a summit. On Thursday, May 31, US Secretary of State Pompeo hosted Kim Yong-chol, the highest ranking North Korean official to visit the US in 18 years. After the meeting, Pompeo said the two sides had "made progress" and that Kim was expected to deliver a letter to President Trump from the North Korean leader on Friday.

Even if the summit does take place, there is currently no indication that either side has shifted their standpoint. It is also unclear if both sides agree to the meaning of "complete denuclearization." Although they apparently "completely dismantled" their nuclear test site, North Korea has yet to express any willingness to dismantle their nuclear capabilities or "immediately" denuclearize.

"Based on the sequence of events that led to Trump's non-cancellation/cancellation of the summit with Kim, it seems that there are signs of policy dysfunction in this White House with respect to North Korea policy," said Pak.

While the symbolic value of a US-North Korea summit cannot be denied, outcomes changing the strategic landscape are far from certain.

It seems that for the Trump Administration, the act of holding the summit would be seen as a victory.

"It would be nothing short of tragic to let this opportunity go to waste," said Secretary Pompeo on Thursday.

Looking closer, the best-case outcome of a summit is most likely to be just the beginning of long-term, technical negotiations. But if Trump's history is any indication, he would be satisfied with the appearance of unprecedented diplomacy.

"All roads to peace on the Korean Peninsula obviously have to run through Seoul and Pyongyang," said Fitzpatrick.

"North and South Korea can by themselves make many strides toward peace.  But North Korea has always demanded that the US be its main interlocutor. And of course, the US role is crucial because of the nuclear umbrella it wields. So ultimately, real progress toward denuclearization must involve the US, even if its influence is diminished by Trump's poor judgment and leadership."

US President Donald Trump has hinted that a canceled summit with Kim Jong Un may be reinstated. He added that if successful it will likely take place in Singapore on June 12. (26.05.2018)