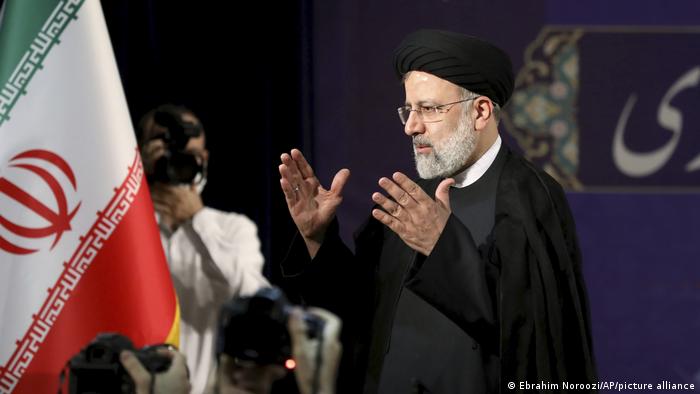 The news of hard-liner Ebrahim Raisi's election win in Iran on Saturday sparked mixed reactions from the international community.

The 60-year-old arch-conservative cleric will replace outgoing moderate President Hassan Rouhani, who could not run again after holding office for two terms.

Raisi is known as a fierce critic of the West. He will become the first serving Iranian president to already be under US sanctions before entering office, due to his involvement in mass executions in 1988.

Iran's regional allies were quick to congratulate Raisi, but analysts say his win could spell difficulties in improving ties with regional neighbors and the West.

Who welcomed his win?

One of the strongest messages of support came from Russia, with President Vladimir Putin saying Raisi could help strengthen "bilateral cooperation."

"This responds entirely to the interests of the Russian and Iranian people and goes towards reinforcing regional stability and security," Putin said in a message.

Syrian President Bashar Assad was one of the first to welcome the win, sending his "warmest congratulations" in a statement. Iran has been a key player in helping Assad hold power in Syria's decade-long conflict.

Congratulations also came in from the United Arab Emirates as well as Oman, which has served as a mediator between Tehran and the West.

How did others respond?

Israel voiced concern over Raisi's win, saying the international community should be alarmed over his commitment to a "rapidly advancing military nuclear program."

The United States said it regretted Iranians were not able to participate in a "free and fair electoral process."

A State Department spokesperson said, "Iranians were denied their right to choose their own leaders in a free and fair electoral process."

The European Union also did not react immediately. Brussels did, however, release a statement on Saturday evening saying negotiations on reviving the 2015 Iran nuclear deal will resume on Sunday.

The EU statement said representatives from Iran will be present at the talks in Vienna, along with the other signatories of the 2015 deal. The US also said it would participate in indirect negotiations on the Iranian nuclear program.

What have analysts been saying?

Experts are divided on what Raisi's win could mean for the future of the nuclear deal talks.

Analysts with the Eurasia Group think tank said his win wouldn't likely uproot the negotiations in Vienna, but warned that his election could have a major impact on other areas of Tehran's foreign policy.

Why are Iranian voters so frustrated?

Raisi's "hard-line, anti-Western views are a sharp break from the more moderate stances of Rouhani and will have a significant impact on Tehran's relationship with the outside world."

"Iran has now sent a clear message that they are tilting to a more radical, more conservative position," said Abdulkhaleq Abdulla, a UAE political analyst, told the Reuters news agency.

"Nevertheless, Iran is not in a position to become more radical ... because the region is becoming very difficult and very dangerous," he added.

Voting controversy at home and abroad

Exiled Iranian opposition groups decried the election results as a farce, saying the vote was an engineered victory for Raisi. They'd called for a boycott of the election, which they hailed as a success based on the low voter turnout.

The head of the National Council of Resistance of Iran (NCRI), Maryam Rajavi, said the low turnout showed Iranians had "voted for the overthrow of the ruling theocracy."

Meanwhile, Iran summoned Britain's ambassador on Saturday over reported attacks on ex-pat voters. The incidents allegedly took place at polling stations for Iranian ex-pats set up in the UK.

An Iranian Foreign Ministry spokesman said one incident involved the "beating" of a woman who was voting.

Britain's ambassador was summoned over alleged disruptions to voting in Birmingham and London.

A report by IAEA chief Rafael Grossi says Tehran has failed to provide a proper explanation for the discovery of uranium particles at three sites across the country.