Two years on from the Paris Agreement, a summit in the French capital has mobilized investors to fight global warming. But critics say that when it comes to government funding, France in particular needs to do more.

French President Emmanuel Macron opened Tuesday's international summit in Paris aimed at raising funds to fight climate change with a stark warning. "We are losing the fight against global warming," he said at the Seine Musicale, a performing arts center shaped like a ship with a sail made from solar panels — a building that aspires to a more sustainable future.

Environmental groups welcomed the news that investors including the World Bank and insurance provider AXA were moving away from fossil fuels. Yet despite Macron's high-profile efforts to take leadership on climate action, critics said France's commitments on climate finance fell short.

Exactly two years after the historic Paris Agreement, and just weeks after the COP23 summit in Bonn, Germany, the One Planet Summit was put on by the UN and World Bank.

Laurence Tubiana, French ambassador for international climate negotiations, who played a key role in brokering the 2015 COP21 agreement, said the urgency of the problem meant it was vital to maintain momentum. "The COPs set the global targets," Tubiana said. "With the One Planet Summit, we can develop strategies to achieve these targets."

So far, climate finance has proved a sticking point in international negotiations.

Huge sums of money are needed to guard against the impacts of climate change — for example building dams against flooding or reducing emissions through the development of renewable energy capacity.

Developing countries are often among those most impacted by climate change, but lack the resources to adapt, or to develop new sources of energy. In 2009, industrialized countries promised to come to their financial aid, with $100 billion (€85 billion) per year in climate finance from 2020.

But according to the latest OECD figures from 2014, only $41 billion was flowing from the richer countries to those in need.

Tuesday's summit aimed to boost that figure with both public funds and private investment.

Some 4,000 people descended on the French capital for the gathering, including around 50 heads of state, as well as local officials and representatives from private finance institutions, major companies, investors, NGOs and foundations. 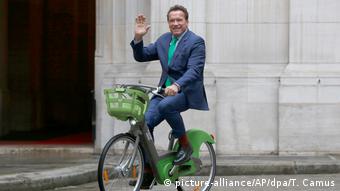 Former California Governor Arnold Schwarzenegger also made an appearance. US President Donald Trump was not invited.

The result was 12 official pledges covering a range of programs including mitigation and decarbonization projects, support for island states vulnerable to climate change and promoting climate research. The Climate Action 100+ initiative encouraged large institutional investors to consider the carbon footprint of the companies they put their money into.

But the most attention-grabbing announcement came from elsewhere.

The World Bank said it would cease investment in the drilling and production of oil and gas from 2019.

"It will have a real impact as the World Bank often leads the way and has a huge potential to change the economy," she told DW.

France's leading insurer, AXA, announced it would continue to move away from investments in coal, and cease to insure tar sands projects and pipelines. The company also said it would double investment in renewable energy to $12 billion euros by 2020.

The European Union, meanwhile, said it would invest €9 billion in African climate projects by 2020.

CPI regularly publishes what it claims is the most complete overview of financing to counter climate change. It says that in 2015 and 2016, combined public and private investment worldwide amounted to $410 billion. 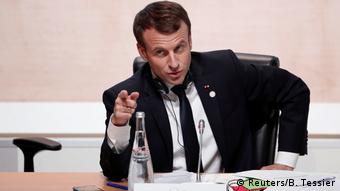 Is Macron doing enough when it comes to financing the fight against climate change?

Buchner says there's a clear upward trend, with a growing field of different players getting involved.

"One of the interesting findings was that last year for the first time there was direct investment by institutional investors such as pension funds and lending by commercial banks," she said. "That's very positive."

Buchner is hopeful that Tuesday's summit will boost this trend further — and fast. She pointed out that much more money is needed, and it often takes time for investments to have an impact.

"According to the International Energy Agency we will need to invest $1 trillion to get on track when it comes to the energy sector," she said. "And that doesn't even include agriculture, forestry and water."

France brings up the rear

Armelle Le Comte, a climate specialist at Oxfam, was impressed by promises from the World Bank and AXA. But less so by the 12 pledges from the countries themselves. "The governments haven't contributed enough — it's rather meager," she told DW.

Above all, Le Comte said France had plenty of catching up to do.

President Macron has made headlines this year with his initiative to promote climate research in response to Trump's plans to exit the Paris Agreement, and his "Make Our Planet Great Again" video. Yet Le Comte called the summit's host nation "one of the worst students in the class" on climate finance.

"In 2016 we invested just €3.5 billion euros in the struggle against climate change — the German budget was more than twice that."

She added that of that sum, only 8 percent was in direct grants, with the remainder taking the form of loans. "That's a real problem," Le Comte said. "The poorest countries are practically excluded from this kind of financing because they aren't creditworthy."

By comparison, grants made up around 30 percent of Germany's contribution to climate finance.

Paris has put relatively little public money into mitigation measures either. During the summit, Macron upped the French target of spending €1.2 billion per year on mitigation to €1.5 billion. But Le Comte said that was a drop in the ocean. She would like to see the budget doubled, at least.

"Macron has spoken a lot of big words," Le Comte said. "We are still waiting for action."