Germany, France and the UK have set up a payment channel with Iran called INSTEX, to help continue trade and circumvent US sanctions. Washington has cautioned EU nations against such actions. 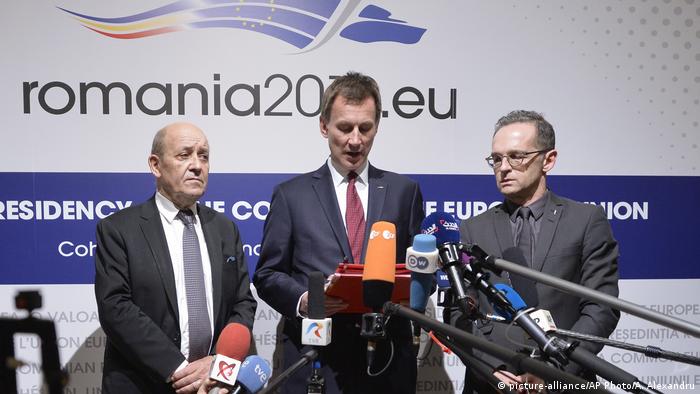 Several European countries have set up a new transaction channel that will allow companies to continue trading with Irandespite US sanctions. The announcement was made on Thursday.

The channel, set up by Germany, France and the UK, is called  INSTEX — short for "Instrument in Support of Trade Exchanges."

"This is a precondition for us to meet the obligations we entered into in order to demand from Iran that it doesn't begin military uranium enrichment," Maas said.

The payment channel allows for European countries to continue trade with Iran but could put them on a collision course with Washington.

"This is an important step and a political signal by E3, who feel duty bound to uphold the Iran nuclear deal as long as Iran fulfills all its obligations as set out in the treaty," German government sources told DW, referring to the three EU countries. "The E3 have emphasized their aim of facilitating legitimate trade relations with Iran."

Iranian Deputy Foreign Minister Abbas Araghchi told state television it was "a first step taken by the European side ... We hope it will cover all goods and items."

The Trump administration had warned the European Union against trying to sidestep sanctions on Iran.

On Thursday, the US State Department said it was "closely following" reports on the European mechanism.

"As the president has made clear, entities that continue to engage in sanctionable activity involving Iran risk severe consequences that could include losing access to the U.S. financial system and the ability to do business with the United States or US companies," the State Department said in a statement.

Trump pulled the US out of the 2015 Iran nuclear deal and reimposed sanctions last year. Along with fellow signatories Russia and China, the EU maintains that Iran has not broken its side of the deal and should be allowed to trade.

"The lifting of sanctions is an essential dimension of the JCPOA (Joint Comprehensive Plan of Action), the Iran nuclear deal. The instrument launched today will provide economic operators with the necessary framework to pursue legitimate trade with Iran," said a statement from Mogherini's office.

EU-Iran relations tested: Although Europe has been willing to show good faith since the US left the nuclear deal, relations with Tehran have recently worsened. The EU imposed sanctions this month over Iran's missile tests and alleged assassination plots on European soil.

US sanctions on Iran raise concern in Turkey

Turkey has been exempt from oil sector sanctions imposed by Washington on the regime in Tehran. But Turkish businesses fear the possible consequences of a likely shift in Donald Trump's mood toward Turkey. (08.11.2018)