Hungarians protest draconian ′slave law′ as Orban cracks down on dissent | Europe | News and current affairs from around the continent | DW | 17.12.2018

Hungary is seeing its largest protests in years, triggered by an employee-hostile law. But for the protesters, it's about a lot more. Meanwhile, the government, led by strongman PM Viktor Orban, smells a conspiracy. 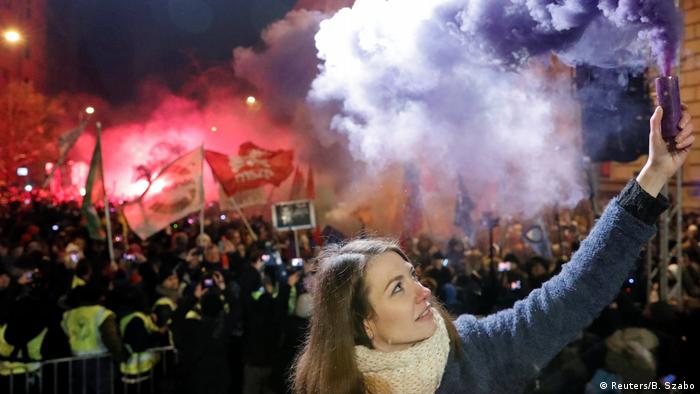 For days, thousands of Hungarians have been protesting against the Orban government's social policies and against the anti-democratic restructuring of their country. It's a wave of protests the likes of which Hungary hasn't experienced in a long time.

In some cases, police have been using violence and teargas against protesters in the last few days, even though before that there had merely been some scuffles with the officers. Dozens of people, some of them not even part of the protests, were arrested, and many were only released after 12 hours or more.

On Sunday, a large-scale peaceful rally organized by opposition parties and Hungarian trade unions took place without problems — initially. But late on Sunday evening the police again used tear gas against demonstrators when they mobbed the building of Hungary's public radio station.

Sunday night, a group of members of parliament, who have free access to the radio building, demanded in vain to be allowed to read a live petition on the news. They continued their protest in the radio building on Monday. At one point, one of the parliamentary protesters was forcibly thrown out of the building, although this is not permitted under current law for various reasons including parliamentary immunity.

The wave of protests was triggered by an amendment to Hungarian labor law, now known to the public as the "slave law," which was passed in parliament last week. The law increases the possible number of overtime hours per year per employee from 250 to 400. At the same time, employers can now take three years instead of one year to pay overtime.

The amendment was passed over massive protests by trade unions, the opposition and civil organizations. The vote was riotous because the opposition had occupied the podium of the parliamentary president.

When Orban and his government reformed labor and tax law years ago in favor of companies, there were hardly any protests. In the meantime, the right to strike has been severely restricted and companies pay lower taxes in Hungary than anywhere else in the EU.

Hungarian trade unions are now weak and politically fragmented. Most opposition parties are only marginally concerned with sociopolitical issues, while non-governmental organizations have concentrated mainly on the issue of undermining the rule of law in recent years.

But now, a certain part of the Hungarian public is directing all of their anger toward the "slave law." The amendment is putting major social problems — which Orban's system has created in the first place — on the shoulders on employees, and doing so in a brazen way that many consider humiliating. In addition, there is a massive shortage of labor in Hungary as a result of the large number of people leaving the country, which in turn is largely a result of the frustration of many Hungarians with Orban's policies.

Over the past eight years, some 600,000 mostly well-educated citizens have migrated from Hungary because of the oppressive political climate, the poor organization and underfunding of some parts of the education and health care systems, and the high dependence of private companies on government support. Now the government apparently wants to combat the massive labor shortage simply by increasing overtime.

But the protests are about more than just the "slave law." A law on the establishment of a new administrative jurisdiction was passed at the same time. It is a new branch of the judicial system, which, unlike the current courts, is largely under the control of the Ministry of Justice.

Cases that are important or sensitive for the government are to be given to the new administrative courts if necessary, thus further undermining the independence of the judiciary in the country.

Other laws also seem to have been the subject of public discontent in recent times. In September, for example, homelessness was virtually banned in Hungary. This is a very broad provision aimed at forcing homeless people into dormitories. Surveys in Hungary have shown that many people in the country do not approve of such action against homeless people.

The fact that former Macedonian Prime Minister Nikola Gruevski, who was sentenced to prison for corruption in his home country, was granted asylum in Hungary in an urgent procedure and now likes to dine in luxury restaurants was also a source of displeasure, as the independent media revealed.

According to a new survey, a majority of Hungarians consider corruption in their country in general to be a greater problem than the danger of migration, which Orban and his government repeatedly evoke.

It is unclear how long the current protests will last. Opposition parties have called for protest rallies in the coming days as well. The Orban government responded in its own way: It claimed the protests were initiated by US billionaire George Soros and the forces behind him, as well as by people who want to flood Hungary with migrants. In addition, the government says, provocateurs and foreign criminals take part in the protests, with the goal of degrading Hungary abroad.

There is a lack of skilled workers in western and northern Europe, unemployment in southern and eastern Europe. "Qualified migration" is the new magic formula, but there will be consequences, says Norbert Mappes-Niediek. (15.12.2018)

In a tense vote, a majority of EU lawmakers backed a motion that opens the door to sanctions against Hungary. Viktor Orban's government is accused of silencing media, targeting NGOs and removing independent judges. (12.09.2018)