Thousands of Hungarians took to the streets in a second day of protests in the capital Budapest. They are furious about the government's decision to allow employers to demand up to 400 hours of overtime from workers. 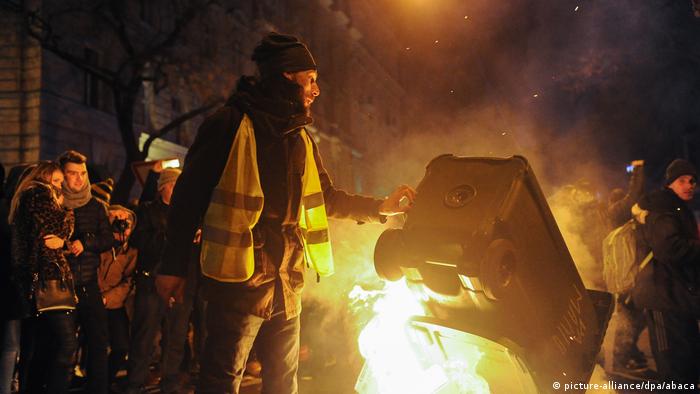 Some 3,000 angry demonstrators took to the streets of Budapest on Thursday to protest laws passed in a tumultuous parliamentary session a day earlier.

Many of the protesters gathered in front of parliament, while others blocked streets and bridges in the city. Protesters could be heard shouting "Dirty Fidesz" and "Orban go to hell," references to Prime Minister Viktor Orban and his right-wing Fidesz party.

Many protesters were angry about new labor laws that will allow employers to require up to 400 hours of overtime from workers each year. Others denounced the government's decision to create new administrative courts that will be run by the government and tasked with overseeing elections and other sensitive government-related procedures.

One protester, Tamas Szabo, told Reuters news agency: "Discontent has brought us here … one is the issue of the courts, which is the next phase of cementing their power. The other is a slap in the face of working people."

Many university students taking part in the protests said they were demonstrating against the government's ouster of Central European University (CEU), an institute founded by Hungary-born billionaire and Orban-critic George Soros.

Although the government rejected claims that the new courts would lead to political interference of the country's judicial system, critics are not convinced. Since taking power in 2010, Orban has consistently worked to undermine the rule of law in Hungary.

Orban and Fidesz have been able to hang on to a two-thirds majority in the Hungarian parliament by taking control of the media and making changes to the country's election system.

The European Parliament has become so incensed over Orban's blatant disregard for EU rules regarding democracy, civil rights and corruption that it triggered sanction procedures against Hungary in September.

Orban, however, is relying on support from allies within the EU, such as Poland, which faces similar criticism, to shield Hungary from any penalties.