George Soros′ university set to move courses out of Hungary | Europe | News and current affairs from around the continent | DW | 25.10.2018

George Soros' university set to move courses out of Hungary

The university trustees have set a deadline of December 1 for an agreement to be signed so its legal status in Hungary is resolved. If not, new students will be heading to Vienna for their courses. 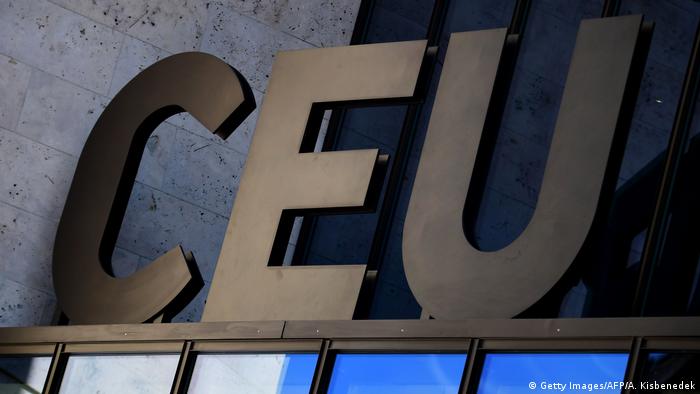 CEU, a graduate-level, private institution founded in 1991 by Hungarian-American billionaire and philanthropist George Soros, said it would switch to enrolling new students in the Austrian capital if it did not receive assurances of academic freedom by December 1.

The university has been locked in a struggle with the government of Hungarian Prime Minister Viktor Orban, who is a major opponent of Soros, after Hungary instituted a new law regarding higher education.

The government has accused CEU of not being in compliance with new educational requirements, The university has maintained it has taken all required steps.

"We are being forced out of a country that has been our home for 26 years," CEU President and Rector Michael Ignatieff told a news conference.

CEU offers graduate-level courses in English and is frequently ranked among the top universities in Hungary.

In April 2017, the Hungarian government instituted changes to the country's higher education law that were seen as mainly targeting CEU. They included a ban on gender studies programs, a suspension on migrated-related research and a requirement for a foreign university to offer courses in its home country.

CEU, which is chartered in the US State of New York but did not conduct educational activities there, has since established educational programs at Bard College, its partner institution. It also suspended a program for refugees in August after Orban's government imposed a tax on programs assisting immigration.

However, the new education law also required Hungary's government to have an agreement with a foreign university's other country in order to operate. The CEU says the refusal of Orban's government to sign it has left the university in "legal limbo."

"The Hungarian authorities have indicated that they would not sign the New York State agreement," the university said Thursday in a statement. "All attempts to find a solution that would enable CEU to remain as a US degree-granting institution in Budapest have failed."

David Cornstein, the US ambassador to Budapest, has been talking with the Hungarian government to try to finalize the agreement. He said in a statement that the CEU remained a priority for Washington and it had overwhelming bipartisan support in the US.

The university said it would enroll new students for the 2019-2020 academic year at its Vienna campus if its legal status in Hungary is not resolved by December 1. Currently enrolled students will be allowed to remain in Budapest to complete their degrees and the university will try to maintain as much research and educational activity in the Hungarian capital as possible.

Thursday's move by CEU, quickly dismissed as a "Soros-style political ploy" by the Hungarian government, is the latest episode in an anti-Soros campaign by Orban. His government has conducted billboard and media campaigns against Soros, blaming him for Europe's migrant crisis.

In May 2017, a Soros-backed non-governmental organization (NGO), Open Society Foundation, was forced to move staff and offices from Hungary to Germany as Orban's government instituted new regulations against foreign-funded NGOs.

Soros has said his support for refugees is part of a larger humanitarian mission to back open societies around the world.

Orban's disdain towards Soros comes despite the fact his Fidesz party received aid from Soros' foundations a couple years before the end of communism in Hungary in 1990.

Soros has also been criticized by Donald Trump, with the US president recently accusing the pro-democracy philanthropist of paying demonstrators to protest against newly confirmed Supreme Court Justice Brett Kavanaugh. On Monday,a bomb was found in the mailbox of Soros' suburban home in New York.

The prime minister supports a new law that could drive a university backed by ideological rival George Soros out of Hungary. Orban believes the CEU has an unfair advantage over Hungarian universities. (31.03.2017)

Viktor Orban has started a personal propaganda war against George Soros, a billionaire US investor and the Hungarian PM's top enemy of the state. DW's Ben Knight explores the new hostility towards the NGO funder. (02.06.2017)