Criticism is growing over a new law in Hungary which could force the George Soros-funded Central European University (CEU) university to be shut down. DW talked to the university's president, Michael Ignatieff.

DW: The Hungarian government is arguing that it's not targeting the Hungarian part of your university but the one registered in the US. What's your take on that?

Michael Ignatieff: You can't split the institution in two. We've been here for 25 years. We are a Hungarian and an American institution, we are also a European institution. You can't split us in two, it won't work.  An institution should be free to award the degrees it wants to award. We have awarded for a long time MAs and PhDs accredited in the United States. Any attempt to attack that is an attack on our freedom and that is what we are resisting.

What's your view on the way the bill has been seemingly rushed through parliament?

Well, in a democratic society - Germany, for example - if they wanted to change the regulations relating to a university you talk, you give them advance warning, you have discussions. We had no advance warning, no discussion, no bilateral exchanges. In fact, they refused to meet us, so that has had the effect of making this much more difficult.

Go ask the prime minister of Hungary, I have no idea. We get up every morning and we do the things universities do. We teach medieval history, we teach political philosophy. We do exactly the same things the great German universities do. Every day of the week. And I simply can't understand why we've been attacked in this way. This is a direct political attack by the government on a free institution. And so we've resisted and that's in accord with a lot of Hungarian citizens. I mean Sunday's demonstration, you know - for hours people streamed past this university, the idea that we are defending a free institution has echos right across Hungarian society.

Read: Massive rally in Budapest in support of Soros-funded university

Do you see a connection between what is happening to your university now and Prime Minister Viktor Orban's political objectives?

I don't know what his political wishes are, it is none of my business. I don't know whether he is right-wing, I don't know whether he is a liberal. I couldn't care less. I want to be left alone. A free institution is entitled to govern itself. Self-governing institutions are a corner stone of democracy. And universities are among the oldest self-governing institutions in the world. Your great German universities go back centuries and they have been free to govern themselves, except in your recent past. This is the value we are fighting for. I have no interest in staging a political confrontation with Orbán, I am not interested in his ideology. I am interested in defending this institution and getting us back to work.

The founding history of the Central European University is unique, it was a beacon for eastern central European countries after the fall of the Berlin wall, established on the basis of the open society ideas of Karl Popper. Are those ideas being attacked? 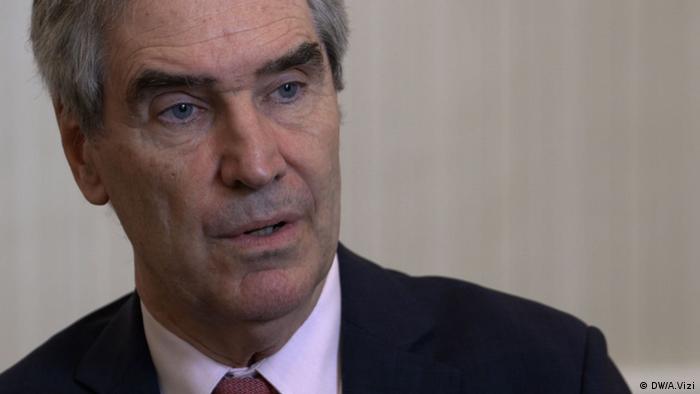 Michael Ignatieff: "We are not going anywhere"

Yes, we are proudly associated with the philosophy of Karl Popper, a great Austrian-German philosopher of science and the key thing about his view of the world was the idea that you have a university where you search for knowledge, you search for truth, if you got it wrong, you correct yourself. That's what freedom means, that's the value we are trying to protect. If that's a problem for the Hungarian government, I simply can't understand why. One of the key parts of this story has been the support we have seen from Hungarian institutions. Great universities in this country have supported us. Because they understand what a free institution means. They understand that if we fight for ourselves, we are also fighting for them.

Your predecessor [John Shattuck - the ed.] was well known for maintaining an open channel for discussions with the Hungarian government. Has this approach changed under your leadership?

The Hungarian government refers to your institution as the "Soros University" - what do you think about that?

There is noch such university. I will not answer questions about a place called "Soros University" because it doesn't exist. This place is called Central European University. I don't answer to George Soros. I answer to 21 trustees. This is why it is an independent institution. That's why it's a free institution.

George Soros is the founder not only of the CEU but also of the Open Society foundation. NGOs affiliated with the foundation in Hungary are facing increasing government pressure. At the beginning of the year Orbán said he wants to have a "Soros-free Hungary." What do you think about his comments not as a rector but as a private citizen?

I think you better ask the prime minister about that. I am proud of our historical association with George Soros, the thing I feel indignant and angry about is that there is no Hungarian anywhere who has done more for his country than George Soros. As I said before, I don't answer to him, but I respect and admire him and I resent the attacks upon a man who is in my regard a Hungarian patriot.

What are your next steps?

We will continue to defend our academic freedom. We will use all legal means to remain in Hungary because the simple point of this is: Hungary is our home. Budapest is our home and if you have 80,000 people marching past your door, they are saying in essence 'you belong here,' you bet we belong here. We are not going anywhere.

Michael Ignatieff has been president and rector of CEU since 2016. The acclaimed Canadian author and academic was leader of the Liberal Party of Canada from 2008-2011.