Massive rally in Budapest in support of Soros-funded university

About 70,000 people have demonstrated in Budapest in support of a local university founded by US billionaire George Soros. Prime Minister Viktor Orban wants to close the college as part of a clampdown on civil society. 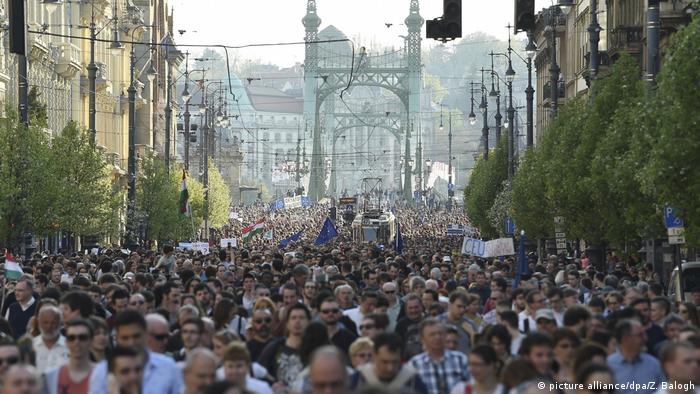 The marchers included students and university staff, many wearing the blue of the Central European University (CEU) and some waving Hungarian, EU and US flags on Kossuth Square outside parliament on Sunday. There were also street protests last Sunday and on Tuesday.

Many chanted for President Janos Ader to veto the legislation. Ader - from Orban's governing Fidesz party - was re-elected by lawmakers for a five-year term in March.

"Don't sign it, Jani," the crowd chanted, using a Hungarian nickname for Ader's first name. Other chants included "A free country, a free university," ''Orban get out," ''Viktator!" and "Europe, Europe." 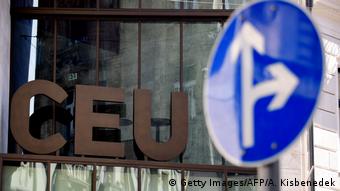 The Hungarian-born Soros founded the English-language CEU in 1991 aiming at helping the region's transition from communism to democracy.

Critics see the move as another attack by Orban on Soros, whom he accuses of seeking to meddle in politics. It is also seen as targeting Soros's Open Society Foundation, which funds civil society groups and has also come under fire elsewhere in the region.

In October 2016 the opposition "Nepszabadsag" newspaper was closed down, with critics accusing Orban of trying to control the press.

Clamping down on the Open Society

Amendments to Hungary's higher education law approved this week could force it to close or move. The law, which was rushed through parliament in less than a week, would require the CEU to change its name and open a campus in the US. The university currently enrolls over 1,400 students from 108 countries.

It is accredited in New York state and in Hungary and students can earn degrees valid in both countries. The CEU has 1,800 students from 100 countries and is ranked in the top 50 universities for political and international studies in the World University Rankings list.

The new rules, approved by parliament on Tuesday, bar institutions based outside the EU from awarding Hungarian diplomas without an agreement between national governments.

A law expected to be passed in May would force NGOs getting more than 7.2 million forints ($24,500) a year from abroad to register with authorities.

The legislation does not mention the CEU by name but the university sees itself as the main target and has warned it may have to close. 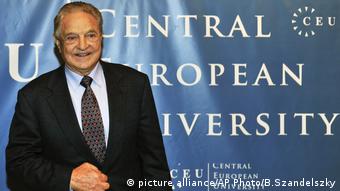 George Soros pictured ahead of the start of his five-day-long lecture at the CEU in Budapest.

The US State Department has expressed its concerns about the legislation and the CEU's ability to continue operating in Hungary.

Deputy Assistant Secretary for European and Eurasian Affairs Hoyt Yee will be in Budapest on Monday to meet with government officials, in part to discuss the CEU. Yee is also expected to meet with authorities from the university.

The governments of the US and Germany have criticized the move to close the university. Hoyt Yee, an official for European and Euroasian affairs at the US State Department, is expected in Budapest during the first half of this week.

More than 900 universities worldwide have signed a petition calling for the new law to be scrapped.