The US president has accused the women who cornered Republican senators in Senate elevators of being "paid professionals." Meanwhile, embattled Supreme Court nominee Brett Kavanaugh has come closer to confirmation. 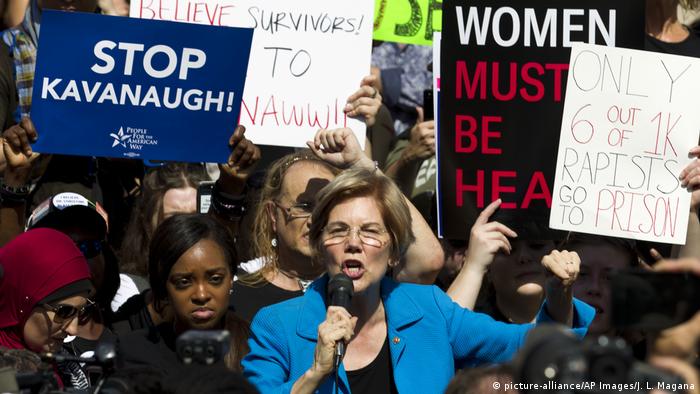 US President Donald Trump has claimed that billionaire investor and liberal donor George Soros is bankrolling the protesters converging on Washington against the nomination of Brett Kavanaugh to the Supreme Court.

He also accused the women who confronted Republican senators in elevators on Capitol Hill over Kavanaugh's nomination of being "paid professionals only looking to make Senators look bad."

Trump did not provide any evidence to support his claims.

"The very rude elevator screamers are paid professionals only looking to make Senators look bad. Don't fall for it!," Trump wrote on Twitter on Friday. "Also, look at all of the professionally made identical signs. Paid for by Soros and others."

Kavanaugh's nomination to the country's top court has led to a divisive debate after Christine Blasey Ford, now a college professor in California, and two other women accused the jurist of sexual misconduct in the early 1980s. Kavanaugh has repeatedly protested his innocence.

Later Friday, the Senate cleared a hurdle to Kavanaugh's confirmation to the Supreme Court by backing a motion 51-49 to advance his nomination.

A final confirmation vote is expected on Saturday.

While the outcome of that ballot is all but certain, last-minute declarations of support from two key senators appear to have tipped the scales in Kavanaugh's direction.

Republican Senator Susan Collins of Maine, who had been undecided, announced she would vote in favor of the 53-year-old's nomination, adding that she did not believe the allegations against him were enough to "fairly prevent" him from serving on the court.

A short time later the remaining undecided Democrat, Senator Joe Manchin, also pledged his support, saying Kavanaugh was a "qualified jurist" who "will not allow the partisan nature this process took to follow him onto the court."

Arizona's Republican senator, Jeff Flake, who had demanded an FBI investigation into the sexual assault claims against Kavanaugh, also revealed he would support the nominee "unless something big changes."

Republican Lisa Murkowski of Alaska is the only Republican who has indicated she will vote no.

Court could tip to the right

If confirmed, Trump's nominee could be sworn in and serving on the bench by next Tuesday. His appointment would shift the court's balance to a 5-4 conservative majority in possible legal battles over controversial issues such as immigration and abortion rights.

Brian Fallon, executive director of Demand Justice, a group that opposes Trump's judicial nominees, said Kavanaugh would join the court "with a cloud over his head."

"He will be an illegitimate justice, and his confirmation will mark a point of no return for the Supreme Court's reputation as the one apolitical branch of government," Fallon told the Reuters news agency.

Over the last few weeks, Republican senators have been confronted by protesters opposing Kavanaugh's confirmation.

Last week, Flake was challenged in a Senate elevator by two women who said they had been sexually assaulted. Moments later, the Arizona senator, much to the delight of his Democrat colleagues, called for a week's delay on the Kavanaugh vote to allow an FBI probe.

On Thursday, several protesters who identified themselves as sexual assault survivors cornered Republican Senator Orrin Hatch of Utah and asked why he was backing Kavanaugh.

Hatch waved and told them to "grow up" as he entered an elevator.

Republicans said the FBI, which has submitted a 50-page report to the Senate, failed to find anyone who could corroborate Ford's allegations. Democrats said agents were constrained by the White House and hadn't reached out to numerous other people with potentially important information.

On Thursday, thousands of protesters gathered on Capitol Hill to fight Kavanaugh's nomination and protest against the FBI report. Over 300 people were arrested during the protests.