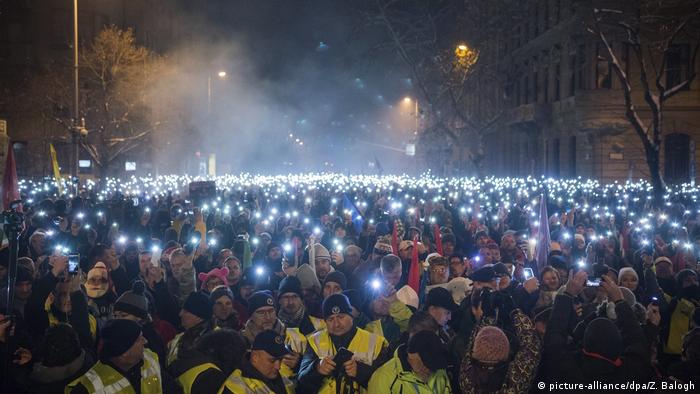 More than 15,000 people filled the streets of Budapest on Sunday night in the fourth and largest protest in a week against the right-wing nationalist government of Prime Minister Viktor Orban.

Hungarians are demonstrating against what they call the government's new "slave law" that allows employers to demand hundreds of hours of overtime a year.

Protesters braved below-freezing temperatures, chanting "Orban, get lost!" as they marched toward Hungary's public television headquarters. They had been hoping to read a declaration on air but were not permitted to do so.

The demonstrators proceeded to hurl smoke grenades, prompting the police to retaliate with tear gas. "All I want for Xmas is democracy," read one banner.

The protests — the first to bring together all opposition parties, from greens to the far right, since Orban came to power in 2010 — have been the most violent in Hungary in more than 10 years. Dozens of people were arrested and several police officers injured.

Inside Europe: University forced out of Hungary

On Thursday, Hungary's parliament passed a bill that allows employers to demand between 250 to 400 hours of overtime a year, and permits them to delay payment by up to three years.

The government has argued that the law helps businesses that are short of labor and will benefit workers who want the extra pay.

Pro-government media has depicted the demonstrations as yet another machination of the Hungarian-born US billionaire George Soros, who has often been used by Orban as scapegoat.

On Saturday, Orban's ruling party, Fidesz, said "criminals" were behind the "street riots."

For many Hungarians, the protests are not only about the new labor law but also about what they view as Orban's creeping authoritarianism.

Journalism is a dangerous job in Central Europe. Hungary and the Czech Republic have shown how three or four oligarchs can hand the government an almost total stranglehold. (23.11.2018)

Hungarians have taken to the streets to protest against labor law changes that would allow employers to demand up to 400 hours overtime per year. The government says it needs greater worker flexibility. (08.12.2018)