How a German family ended up in Syria′s Islamic State-controlled territory | Asia | An in-depth look at news from across the continent | DW | 27.12.2019 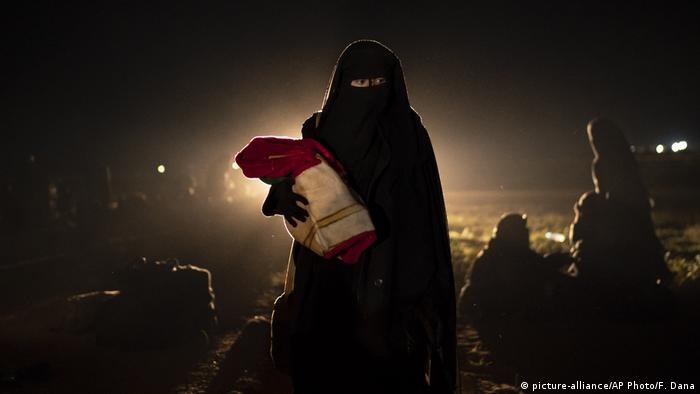 Nora knows a lot about Aicha's life, even though she has never met her in person. They communicate once a week via WhatsApp. Nora is Aicha's lawyer. The fate of Aicha and her four kids depends on this scarce communication.

It's been two years since Aicha and her children ended up in Al-Roj, one of the refugee camps in northeastern Syria. The camps, controlled by Kurdish authorities, accommodate thousands of people displaced by a global campaign against the "Islamic State" militant group. Among them are about 200 people from Europe, including countries like Ukraine and Kosovo. Aicha is one of them.

Prior to her travel to Syria, Aicha had a normal life in Germany — a country to which she wishes to return.

But European nations have so far been reluctant to repatriate their nationals stuck in these camps. As far as the European public opinion and governments are concerned, those residing there are IS suspects and they have no desire to see the return of battle-hardened supporters of the ultra-violent outfit.

Often, Western media have even described the camps as "IS camps."

Worried about the fate of Aicha and her four kids, Nora approached a German court to argue her case and seek her repatriation. The lawyer stresses that the kids are innocent and should not be punished for others' crimes.

The family's journey to jihadist territory

Nora carries Aicha's file in a 250-page folder, the first pages of which detail Aicha's account of how and why she left Germany and has spent most of the past seven years in parts of Syria controlled by jihadist groups.

"Up until 2012, Aicha had a normal life. She was married, had kids and worked in a bank. But her world turned upside down when her husband abandoned the family. Shortly afterward, he disappeared and left without a trace. Aicha only heard back from him a year later. He called to say that he had found a job in Syria and that he missed his family and wanted to see the kids." That's the summary of the first few pages, Nora said.

The lawyer then turned the page and continued: "Hoping to reunite, Aicha takes her kids to the city of Gaziantep,Turkey, where they are supposed to meet her husband and discuss the future of their marriage. In Gaziantep, he shows up in a car and asks them to get in his car, so they can go somewhere to eat. He keeps driving for almost three hours through a dark road. Aicha protests, but he ignores her. The day after, she realizes they are in Aleppo."

The following pages narrate the story of how Aicha, for her own survival, had to play by the rules imposed on her. A year after she arrived in Syria, she gave birth to another child. Her husband then suddenly disappeared again. Was he killed in the battlefield? Probably, but no one knows for sure.

She then contacted her sister in Germany and asked for help. But when her sister sought help from German authorities, they expressed their inability to help, given that there are no diplomatic relations between Germany and IS-held territories.

Compounding her problems, Aicha had no documents and every attempt she made to flee ended up in failure.

When the US-led international coalition defeated "Islamic State" and seized territory controlled by the group, Aicha thought she — along with her kids — could finally return to Germany. But things didn't go as she had wished for.

A German court, however, deemed Aicha's account untrue, because it was similar to the stories told by other jihadist suspects. In the court, the defense lawyer Nora's arguments were countered by Redeker-Sellner-Dahs, a major law firm that represented the German government.

They stated: "It is clear that she traveled to Syria because she wanted to raise her kids with a radical ideology."

Like Aicha, many other alleged jihadist wives have claimed that they were taken there by force or that they were not aware of the jihadists' crimes while they lived there. It is not clear, though, how many of them cooperated with the terrorist group and to what extent.

Counterterrorism organizations such as the Hague-based International Centre for Counter-Terrorism (ICCT) have methods and resources to prosecute jihadist suspects.

Still, European nations appear to have no desire to repatriate IS suspects and put them on trial. They have instead sought to have them tried in the region. Some governments have even revoked the citizenship of a number of nationals over alleged IS links.

European officials fear that the returnees could pose security problems in their countries, by radicalizing fellow citizens or fostering jihadist networks in Europe.

Nora and some other legal experts believe these concerns are overstated.

A report by the European Council on Foreign Relations (ECFR) goes further to  suggest that "returning European IS supporters to Europe is the best way to ensure they remain under control and can be prosecuted, interrogated, and helped with re-engagement as necessary."

There were no records with German authorities to show that Aicha had adhered to a radical Islamist ideology before her travel to Syria. Nora, the lawyer, said: "A person's mere presence in jihadist-controlled territory doesn't make him or her terrorist."

Nevertheless, the most urgent problem we should be dealing with is the future of Aicha's four kids, Nora stressed.

The kids, aged between 3 and 12, are among the 750 children living in the camps in northeastern Syria. "They are at risk of illness and malnutrition and we must take quick action to rescue them," Nora asserted.

The conditions in the "overcrowded and insanitary refugee camps are putting children's lives in jeopardy," said the ECFR report.

To rescue the children, some European countries — including Germany — have agreed to repatriate the children, but not their parents. Nora opposes this policy, saying: "Aicha's children have experienced nothing but displacement and turmoil. Their mother's presence has been the only point of stability in their lives."

Furthermore, Kurdish authorities do not allow separation of children from their mother against the mother's will.

Whenever Aicha could use a phone, she updates Nora about her situation and the condition in the camps. Aicha recently wrote to the lawyer, saying that gangs of radical women had taken control of the camps and that they had been terrorizing and punishing women they deemed insufficiently observant.

"My client is regularly intimidated by them because she refused to join them," Nora said.

Aicha told Nora that a couple of weeks ago, even her 8-year-old daughter was assaulted by the gangs.

Nora intends to explain Aicha's situation to the German court, but collecting evidence and reliable testimonies from the camp has become impossible. Every international organization, including Germany's federal intelligence agency (BND), has left Al-Roj and the surrounding areas.

This has left Nora wondering: "If the area is not safe for international agencies, how is it any safer for children?"

As Nora flips through the folder, a picture of Aicha and her kids appear. Their big dark eyes, fair skin and curly hair stand out in the poor-quality image. They are standing side by side in a tent. Aicha, without a veil, is tilting over her kids so she can fit inside their smallish tent. Pointing to the kids, Nora said: "Look, they are no threat to anybody. If we cannot prioritize their well-being over politics, what makes us the better side?"