Prominent German Jewish figures have warned of the danger of conspiracy theories and rising anti-Semitism during the Bundestag's annual Holocaust memorial service. 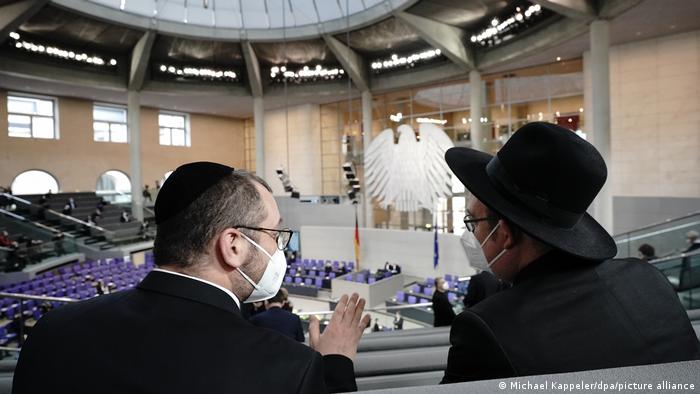 The German Bundestag commemorated the end of the Holocaust with a ceremony in the Reichstag building and online on Wednesday. The commemoration also celebrates 1,700 years of Jewish life in Germany.

The president of the Bundestag, Wolfgang Schäuble, opened the 25th annual Day of Remembrance for the Victims of National Socialism.

He talked of the long and diverse history of Jewish life which began before Germany even came into existence, and of the Roma and Sinti, political prisoners, and homosexual people, among others, who were killed in the Nazi camps.

He also raised a warning of the more recent threats face by new generations. "The past is very much part of the present here," he said, highlighting the threat of anti-Semitism returning to Germany.

The former head of the Central Council of Jews in Germany, and Holocaust survivor, Charlotte Knobloch, and publicist Marina Weisband were guest speakers during the ceremony, attended by President Frank-Walter Steinmeier and Chancellor Angela Merkel as well as other lawmakers.

The annual Bundestag memorial service was launched in 1996 by the then-president, Roman Herzog. The date January 27 was chosen to commemorate the liberation of the Auschwitz concentration camp in Poland by the Soviet Red Army in 1945.

Knobloch, who is 88 years old, is also the current president of the Jewish Community in Munich and Upper Bavaria.

Knobloch talked of her pride of being German, like that of other members of her family. But that pride was not enough to save them from the concentration camps. She retold her and her family's harrowing ordeals during the Nazi regime.

She also criticized coronavirus-skeptics who have compared lockdown measures with Nazi terror, receiving a round of applause from the audience.

"Anyone who compars coronavirus measures with the National Socialist policies towards Jews is trivializing the anti-Semitic state terror and the Shoah. And that is unacceptable." 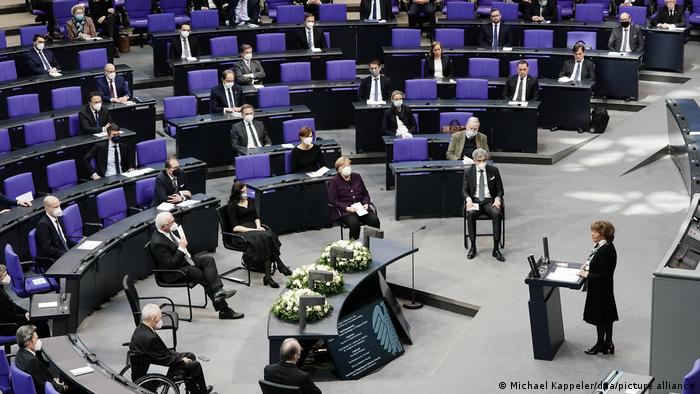 Charlotte Knobloch described her traumatic childhood under the Nazi regime

However, she called present-day Germany a "good country for Jewish people," but urged people to defend what has been created from the increasing instances of conspiracy theories and hatred against minorities.

Knobloch had a few words for the AfD on the "far-right of the plenary," saying: "I cannot pretend it doesn't worry me that you are here." But she held out hope that a few may change their course.

The 33-year-old Weisband, representing the generation born after the Holocaust, is an activist and former politician who moved to Germany as a child from Ukraine.

She told the story of her family's return to Germany and her experience as being Jewish in a country that was dealing with its past, and the dangers Jewish people still face.

She expressed gratitude for the protection, but lamented the invisibility they are forced to uphold for security reasons, while anti-Semitic comments are often repeated in media circuses.

"Being Jewish in Germany means understanding that [the Holocaust] did happen and that it could happen again. It means that anti-Semitism doesn't start when somebody shoots at a synagogue ... it starts with conspiracy narratives."

Weisband countered the notion that we should stop talking about differences and all just be people, pointing out that, "Just being people is the privilege of those who have nothing to fear because of their birth."

She said she receives death threats while far-right extremists are stockpiling weapons and little is done to uncover them in the German police and military.

1,700 years of Jewish life in Germany

This year's service also marks 1,700 years since the first recorded instance of Jewish life in Germany.

In the year 321, Roman Emperor Constantine made the earliest known mention of Jews in Germany with an edict regarding Jewish people in the western German city of Cologne.

The ceremony will end with the presentation of the Salzbacher Torah scroll which was written in 1793 and has been restored in Israel.

The scroll represents the duty that the German state has taken on to protect Jewish life in the country.

In a separate, UN-hosted event to remember the victims of the Holocaust on Wednesday, Chancellor Angela Merkel said she was "deeply ashamed" of the atrocities committed by the Nazis.

Merkel's video message was part of an event organized by the International Holocaust Remembrance Alliance, the United Nations and UNESCO.

The World Jewish Congress is holding its memorial service under the slogan #WeRemember. Due to the coronavirus pandemic, it will be held online instead of at the site of the Auschwitz concentration camp.

This year's service is dedicated to the youngest victims. It will include a series of videos from officials and Holocaust survivors.

German President Steinmeier called on citizens to do what they can to protect Jewish life in Germany, in a video recorded for the World Jewish Congress ceremony: "Each of us is called upon to protect Jewish fellow citizens from threats, insults and violence. Not in the future, but here and now, in the country which we live in together."