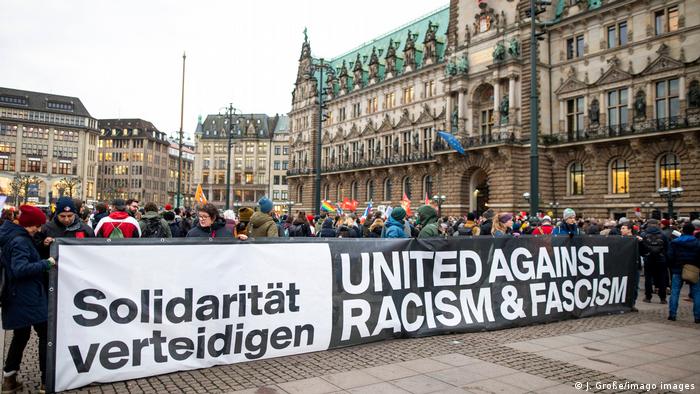 Germany saw a rise both far-right and far-left crimes in 2019, Interior Minister Horst Seehofer announced at a press conference in Berlin on Wednesday.

The country's police recorded just over 41,000 cases of politically motivated crime last year, representing a rise of 14.2% compared to 2018, when there were just over 36,000.

More than half of all cases could be attributed to the far-right scene, the statistics show, with 22,342 cases, representing a 9.4% increase. The politically motivated crimes recorded ranged from verbal abuse, spreading racist propaganda, hate speech, to assault, arson, and murder. There has also been a 23% rise in far-left crime, focused particularly in the eastern city of Leipzig.

At the press conference, Seehofer was at pains to allay concerns that police or authorities were losing sight of far-right violence.

"The biggest threat comes from the far-right, we have to see that clearly," Seehofer said,

Authorities also recorded 2,032 crimes motivated by anti-Semitism - a rise of 13% over 2018, and the highest since those statistics were collected. Some 93.4% of those crimes were carried out by far-right perpetrators. Seehofer said there was a similar figure – 90.1% - for Islamophobic crimes, which have also risen by 4% to 950 cases.

Next week marks the first anniversary of the murder of conservative politician Walter Lübcke, head of government in Kassel, central Germany. Far-right extremist Stephan E. initially confessed to the murder, though he withdrew the confession earlier this year and replaced it with a partial confession implicating an accomplice.

Far-right killings continued in February this year, when nine people of immigrant background were murdered by an extremist in two cafes in the central German city of Hanau.

"What we experienced in 2019 and 2020 represents a new dimension of threat against our democracy," Maier said. "This danger is coming from the right. Three murders in 2019, and in 2020 already 10 murders with a racist and far-right extremist background. It had been a long time since we had the murder of a political representative in Germany, and that makes very clear how big the challenge for us is."

Last week, Seehofer attended the first meeting of a newly established Cabinet committee, chaired by Chancellor Angela Merkel, to fight right-wing extremism and racism. "It was a very, very good and deep discussion," Seehofer said. A cabinet report on new measures is planned for next spring.

The far-right and anti-lockdown protests

Maier, a Social Democrat who said his own campaign posters had been defaced with swastikas, said he had noticed an increase in "far-right structures," both in the form of concerts, martial arts clubs, and online groups.

He said that organizers were using concerts to raise money for political campaigns and mentioned that far-right had even opened bars to create another revenue stream.

He went on connect such developments to a more polarized political atmosphere, and suggested that recent demonstrations against social distancing measures had been deliberately "undermined" by the far-right scene.

The data was released as police in Germany on Wednesday raided 25 premises linked to 31 suspected members of anti-government Reich Citizens Movement — a movement that overlaps with far-right extremist groups.

The group was suspected of making fake documents, including passports, driver's licenses and birth certificates. The raids took place in the states of Hesse and Baden-Württemberg.

A faction of the group was officially banned by Seehofer in March for its anti-Semitic and right-wing sympathies.

Germany experienced 2,000 crimes against Jews and Jewish institutions last year, a 13% rise on the previous year, according to a Sunday newspaper. That’s about 1 in 20 of all politically motivated offenses. (10.05.2020)