Germany recorded over 22,000 right-wing extremist crimes last year, according to preliminary interior ministry statistics. And twice as many weapons permits were issued than the previous year. 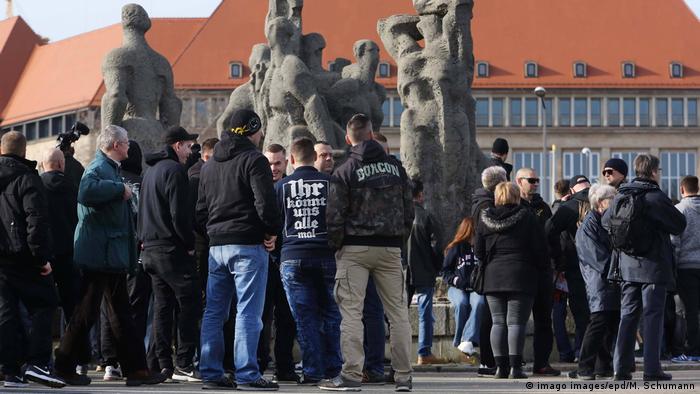 Germany last year recorded 41,175 politically-motivated crimes, with more than half of them (22,337) attributed to right-wing extremists. This is according to the federal interior ministry in preliminary data requested by Irene Mihalic, a police officer and criminologist who is now the Green party's interior affairs expert.

Mihalic found that the figures also show that the count of officially notified weapons permits held by far-right extremists had doubled since 2018, reaching 892.

"This development marks a dangerous weapons buildup within the [far-right] scene," said Mihalic, while calling for a "resolute disarming" of such individuals.

Crimes committed by neo-Nazis amounted to an "enormous threat," she told the Funke Media Group, a newspaper and online chain based in Essen incorporating several local publications.

Read more: Does Germany do too little to remember victims of racist terror?

A documentary broadcast on Monday by German public broadcaster ZDF estimated that only 8% of 2,558 attacks on asylum-seekers' hostels between 2015 and 2018 resulted in perpetrators actually being convicted, fined or jailed.

Police specialists who document politically-motivated crimes, classed the bulk of the 2019 extreme-right cases as "propaganda" and "hate-speech" incitement crimes.

In all, 609 of the crimes were directed at political office-holders, 95 against media representatives, and 92 against minors (children and teenagers), said the ministry

"These are shocking numbers," said Mihalic, "which, in comparison with other areas of crime, underscore once more the extent of the extreme right danger."

In recent months, Chancellor Angela Merkel's government had focused on the problem, but "measures decided so far are simply inadequate," Thomae said.

"The increased number of propaganda offences, cases of civil incitement and anti-Semitic crimes is alarming," Thomae added, calling for a reorganization of policing structures in Germany and more resources for courts.

The ministry statistics delivered to Mihalic also listed 9,849 crimes as leftist extremist and 427 crimes as religiously-motivated, mainly by extremist Islamists.

The federal government also highlighted a rise in anti-Semitic crimes directed at persons of Jewish belief or their facilities. In 2018, 1,799 such cases were counted, there were 2,032 in 2019's provisional tally.