Does Germany do too little to remember victims of racist terror? | Germany| News and in-depth reporting from Berlin and beyond | DW | 11.03.2020 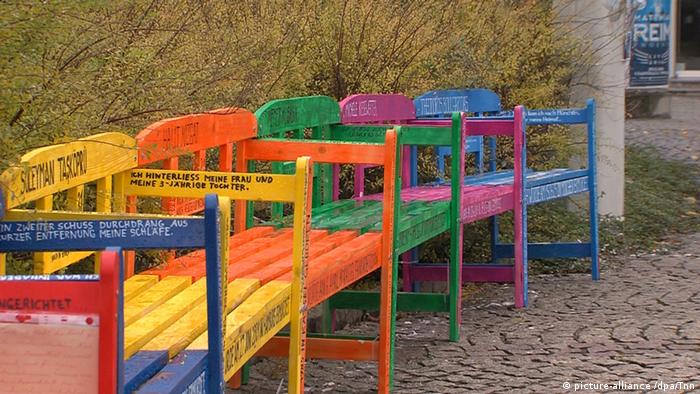 On August 21, 1980, xenophobic terrorists threw three Molotov cocktails through the window of a Hamburg refugee shelter. Eighteen-year-old Do Anh Lan and Nguyen Ngoc Chau, both from Vietnam, were sleeping inside. They suffered severe burns in the attack and died several days later. The racist killers had spray-painted "Foreigners out!" on the wall of the shelter.

Do Anh Lan's mother, Do Mui, grieves for her son's death to this day. She has called for an official memorial site to be set up to commemorate his life. "Nobody seems to care," she told the German weekly Die Zeit.

On February 19, 2020, a 43-year-old man killed nine people in the town of Hanau, near Frankfurt, apparently motivated by what some officials and journalists have described as the victims' "foreign roots." The racist attack shocked Germany. President Frank-Walter Steinmeier and Chancellor Angela Merkel later attended the memorial service to pay their respects.

Relatives of the victims fear that life will soon return to normal for much of German society — as if nothing had ever happened. "Relatives are telling us they're scared to send their kids to school," said Robert Erkan, who counsels victims of such crimes. Racist terror, after all, poses a constant danger in Germany, no matter what politicians claim or promise.

There are numerous memorial sites throughout Germany, and in Berlin especially, that commemorate the victims of Nazi Germany. Berlin's Holocaust memorial and the Topography of Terror museum draw millions of visitors, for instance.

Germany does not, however, have such a culture of remembrance regarding more recent victims of racist terror. Often, when the bereaved call for a memorial site to be established, their wish goes unheard. Other times, when such sites already exist, they are vandalized — like many of those set up in German cities in honor of those murdered by the right-wing extremist National Socialist Underground (NSU) terror cell. Some sites have been damaged, others removed, and some defaced with swastika graffiti.

Like in the east German city of Zwickau. Here, an oak planted in honor of the first NSU victim, Enver Simsek, was cut down, most likely by neo-Nazis. Several colorful benches installed to commemorate the victims were defaced within days of their being installed in 2016 (pictured).

The parents of Halit Yozgat, the last victim of the NSU group, have for years called on the city of Kassel to name the street on which their son was born after him — to no avail. They don't want the state to pay them money to compensate for their loss. All they want is Germany to confront its recent history of racist murders and to create a site that commemorates their son's life.

Wednesday is the European Day of Remembrance of the Victims of Terrorism. In advance of the solemn occasion, German President Frank-Walter Steinmeier visited Zwickau and paid his respects at a new oak tree that has been planted. He met mayors from across the country to discuss the rise of hate speech and violence. Local lawmakers, after all, are increasingly being threatened and intimated. Half of all German mayors, for example, report abuse.

Steinmeier urged them to remain steadfast. "Nobody can claim this is none of their business," he admonished German society, "and nobody can remain silent." For too long, he said, "German society has kept quiet about this, but we know that a majority of people in our country want everyone to live together peacefully." He then implored this majority to make itself heard and take a stand against hatred.

Over the years, numerous people have joined Do Mui's initiative to create a memorial site in Hamburg for her murdered son. But, so far, city authorities have refused to follow through on her wish.